The Indian Met office is going the way of their UK counterpart being a butt of jokes. They failed to forecast the monsoon this time round too. This year, they predicted deficient rainfall and the country ended up having copious rains, well distributed too. The hard data is all in and from this it is evident that once the effects of La Nina's second phase started kicking in from July, it was too late for the IMD to damage control - the variations from their forecast was too big to fix.

Depending on IPCC statistical models is too costly for a monsoon dependent economy like India. It is time the Indian Meteorological Department (IMD) dump it once for all and switch to dynamic models that factor in the El Nino-Southern Oscillation (ENSO). India faces droughts during an El Nino and floods during La Nina.  We are likely to have an El Nino  during 2012-2013, as it repeats itself in 3-5 year cycles. And let us hope that they IMD will improve their performance by then.

MET for 7 wrong out of 10 forecasts
Courtesy: DNA 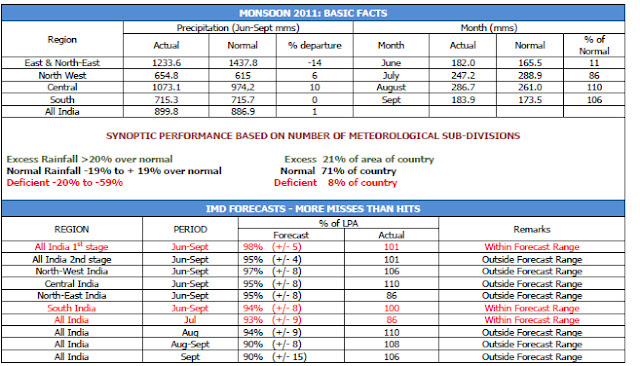 With the southwest monsoon 2011 season behind us, one thing emerges beyond doubt — the pessimistic forecasts of this important weather phenomenon by the (IMD) have been belied by empirical evidence.The department had indicated that rainfall for the country as a whole for the four months ended September would be below normal at 95% of the long period average, with a margin of error of 4%. This was in June and constituted an update of the one issued in April.But, it turned out the showers were copious and overshot the normal by 1%.Clearly, the June forecast represented a refinement over the one issued two months earlier. But, the first stage forecast proved to be correct.This raises a fundamental question: can any model, based on past data or real time developments that are known to have a bearing on the monsoon, predict the course of this important annual event, one that even now makes or mars the fortunes of Indian agriculture.This time, the IMD was wrong in many of its forecasts. Rainfall in three out of the four homogeneous regions during the season did not conform to what it had envisaged.This, despite the high error margin implicit in these forecasts. Similarly, rains in August, September turned out to be different from what was projected.Thus, to say that the agency was widely off the mark would be an understatement. Out of the 10 forecasts issued by the IMD — the first-stage forecast for all-India in April, the second-stage forecast in June for all India, the four homogeneous regions and for the months of July and August, the forecast on August 1 covering the two months of August and September and finally the forecast on September 1 on the quantum of rainfall during the final month of the monsoon season — only three were in line with the actual.Even as late as September 1, the IMD clung to the view that its forecast for all India, issued in June, remained valid, though "it is likely to be on the positive side of the model error."In the same breath, it averred that even for the four geographical regions the season's rainfall might be within the limits of the forecasts issued in June.This assertion is not borne out by the rainfall data for the season as a whole.Even in regard to September rains, the IMD's forecast, issued as late as 1st of that month, proved to be inaccurate, even with a high error margin of +/-15%. It also added a caveat that, should monsoon-friendly La Nina conditions re-emerge during the month, rains could be more than expected.It is not entirely IMD's fault. Unraveling the monsoon is a complex undertaking and despite the increased sophistication of the models designed to predict its course, only baby steps appear to have been made in this direction. The first attempt to forecast this phenomenon was made in 1988 and improvements were further effected in 2003, as a sequel to the failure of the forecast in 2002.Now, it appears, history is repeating itself. The present model did not foresee the drought of 2009 — the worst in nearly four decades — and this year, while its forecasts were somewhat gloomier, there was much to cheer about the performance of the monsoon.