The Great Climate Debate finally over? Differences narrow down to why climate alarmists lost. 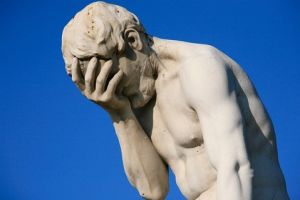 But at this month's Republican debate in California, every presidential wannabe except Jon Huntsman denied that man-made climate change was a problem.

And in another depressing sign of how far global warming has fallen off the political radar, hardly anyone on either side of the Solyndra tempest has argued that betting on the company was important for non-economic reasons. What happened here? In short, the climate change deniers won. Here's a handy chart of how they pulled it off." 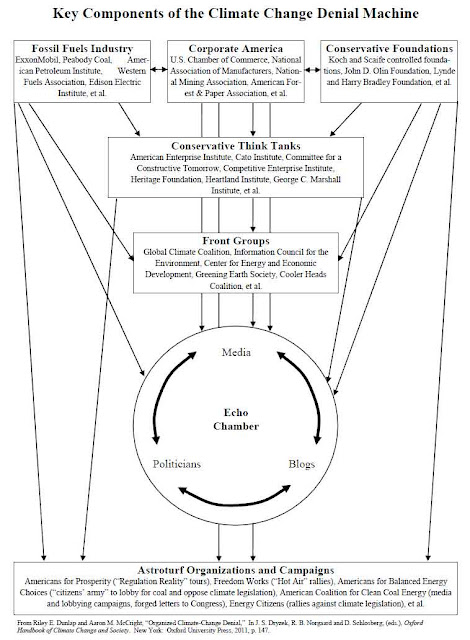 When climate alarmists produced a map trying to explain why climate sceptics won, you know the Great Climate Debate is over. Two sociologists, Riley E. Dunlap and Aaron M. McCright of Michigan University published the above chart entitled "Why Climate Deniers Won" in their research publications Organized opposition to efforts to curb Greenhouse Gases for the new Oxford Handbook of Climate Change and Society, Oklahoma State University. The attempt was to try to explain why climate alarmists lost. 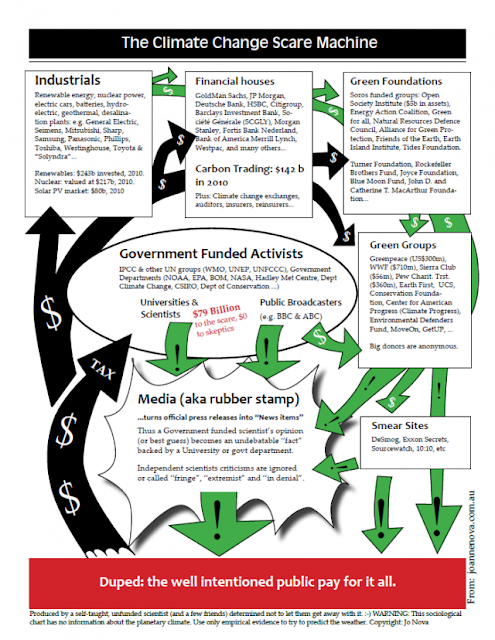 The popular climate skeptic blog, Jo Nova then retaliated by publishing the above chart of how the climate scare machine operated. Here are extracts from Jo Nova's counter that perhaps encapsulate opinion of all sceptics:


1. The money and vested interests on the pro-scare side is vastly larger, more influential, and more powerful than that on the skeptical side. Fossil fuel and conservative-think-tanks are competing against most of the world financial houses, the nuclear and renewable energy industry,  large well financed green activists (WWF revenue was $700m last year), not to mention whole government departments, major political parties, universities dependent on government funding, the BBC (there is no debate), the EU, and the entire UN. 2. Despite this highly asymmetrical arrangement, the skeptics are winning simply because they’re more convincing — they have the evidence. The other team avoid debate, try to shut down discussion (only their experts count), they imply the audience is too stupid to judge for themselves, and then call everyone who disagrees rude names. The dumb punters are figuring them out. Vale free speech.

The evidence changed, but who wanted to know?

When the evidence began rolling in showing how the assumptions were wrong, the graphs were flawed, the thermometers were biased, and the “expert” scientists were behaving badly — who exactly would benefit from risking their career, cutting off the cash cow, being exiled from friends and colleagues, and being called a “Denier” for speaking the truth? The perpetual self-feeding cycle of alarmism has it’s own momentum — Create a scare and siphon up the taxes, fees, fines, charges and donations. As a bonus, activists feel like heroes, some collect awards and tributes while they trash the tenets of reason and logic, and hail false Gods of Science (as if any authority is above question). Others gratify base desires by pouring scorn on giants of science, dismissing 40 years of top service with one tenuous association (there’s a certain kind of appeal to a certain kind of person.)
How could such poor reasoning triumph for so long in the “modern” era?

The key is that so many benefit from the status-quo once the alarm is raised. There is no need for a global conspiracy and most of the organizations and groups named here are doing honest work with respectable intentions. The problem is not conspiratorial, its systemic. Monopoly-science is not the way to seek the truth. Monopolies don’t deliver: not in markets, religion, or government either (think “EU”).  We need competition. Once an alarmist cycle is set up, with international bureaucracies, industries, taxes, associations, and activists in place, with careers riding on the perpetual alarm, what stops it? Volunteers?

§  Which university or government department do sceptical scientists apply to? What grant do they apply for?
§  The money, power, and influence is vastly larger on the side that benefits from the alarm

On the skeptical side, Exxon chipped in all of $23 million over ten years, but it’s chump-change. The fossil fuel industry doesn’t like carbon legislation, but it’s not life or death, unlike the situation for wind and solar, which would be virtually wiped out without the subsidies provided by the scare.

The US government has poured in $79 billion and then some. But the pro-scare funding is pervasive: for example — the Australian government spent $14 million on a single Ad campaign, and another $90 million every year on a Department of Climate Change. The UK government paid for lobbyists to  lobby it, and the BBC “partners” with the lobby groups. The EU doesn’t just subsidize renewables, it also pays them to push for more subsidies. Even the dastardly Exxon paid more than 20 times as much for a single renewables research project than it did to sceptics.

Last year in carbon markets $142 billion dollars turned over, and $243 billion was invested in renewables. If the carbon market idea went global it was projected to reach $2 trillion a year. Every banker and his dog has a bone in this game. Why wouldn’t they?

Curiously, some just can’t see the vested interest of global financial houses and government bureaucrats in these policies. Andy Revkin suggests that the opposition to the alarmist juggernaut is “well coordinated” and “not contentious”. But how well coordinated are the IPCC? Which think-tank has two week long  junkets for tens of thousands of people including media reps from all over the world? Not skeptics.

The money side of the equation is so lop-sided, and eggregiously dominated by pro-scare funding at every level, that skeptics can thank Dunlap-McCright for bringing it up. We’ll take your minor millions and vague allusions to “influence” and up the ante a magnitude, so to speak. Yes, let’s talk about the vested interests?

Somehow the tables have turned. For all the smears of big money funding the “deniers”, the numbers reveal that the sceptics are actually the true grassroots campaigners, while Greenpeace defends Wall St. How times have changed. Sceptics are fighting a billion dollar industry aligned with a trillion dollar trading scheme. Big Oil’s supposed evil influence has been vastly outdone by Big Government, and even those taxpayer billions are trumped by Big-Banking.
The name calling has to stop
It’s absurd self-satire when mere sociologists and journalists casually call Nobel Physics Prize winners: Deniers?  These “deniers” are guys who figured out things like tunneling electrons in superconductors. Just because they won a Nobel doesn’t make them right, but wouldn’t a true investigative reporter’s curiosity pique a little as skepticism rose and rose? Isn’t there a moment when it occurs to any open mind that it might be a good idea to actually phone up a NASA astronaut who walked on the moon and has spoken out as a skeptic and ask: Why?

No a “consensus” is not evidence of how the climate works, and nor is a map of funding, they’re “evidence” of how human society works. They make good case studies of group-think-in-action. Sociologists and journalists who make the mistake of confusing one type of evidence for the other merely help to perpetuate the alarm. The  answer to planetary climate sensitivity won’t be found by following dollars.