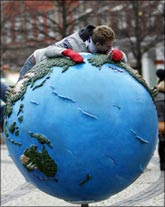 After failing to save Kyoto Protocol, India is fighting to include protection differentiated responsibility enshrined in the protocol in the proposed climate treaty to defeat the call of the rich countries of having mandatory emission reduction target for all nations.

Australia and Norway have proposed a new agreement seeking emission reduction targets for all countries on basis of their global warming causing carbon dioxide emissions.

They have set a target of 2015 to make the agreement operational. The proposal calls on major economies to quickly strengthen steps to curb emissions, agree on a way to standardise actions and a system to compare and verify what everyone else is doing.

The proposal was opposed by India this week at the United Nations climate talks in Panama City on the ground that the bid of the historical polluters, the rich nations, to have one emission reduction regime for all was not acceptable.

"They (rich nations) cannot ask the recent emitters like India and China to take on the responsibility of cutting emissions," said an Indian negotiator, while outlining country's position on the issue.

Instead, India had urged the UN body of 195 nations to adopt a new climate agreement which have basic tenements of the Kyoto Protocol --- mandatory emission reduction target for the rich nations and voluntary emission control measures for the developing world.

There will be a lot of difficulty in getting the Indian proposal through at the conference of 195 nations with other many developing countries are not willing to support India fully.

There is a division in G-77 plus China, the most powerful group in UN climate talks, with several African countries seeking some emission reduction target for the emerging economies. Even South Africa, which is part of the Basic group of India, China and Brazil, is not openly supporting India as it wants to be seen as a country leading the cause of Africa in climate talks.

Unlike the divided developed world, the rich nations are united in seeking a uniform climate treaty. The European Union had again changed its goalpost and is towing the line of United States and Australia, the two nations which did not ratify the Kyoto Protocol.

Posted by Rajan Alexander at 11:45 AM