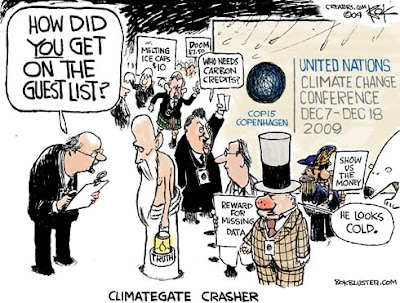 A fresh tranche of private emails exchanged between leading climate scientists throughout the last decade was released online on Tuesday. The unauthorised publication is an apparent attempt to repeat the impact of a similar release of emails on the eve of the Copenhagen climate summit in late 2009.

The initial email dump was apparently timed to disrupt the Copenhagen climate talks. It prompted three official inquiries in the UK and two in the US into the working practices of climate scientists. Although these were critical of the scientists' handling of Freedom of Information Act requests and lack of openness they did not find fault with the climate change science they had produced.

Norfolk police have said the new set of emails is "of interest" to their investigation to find the perpetrator of the initial email release who has not yet been identified.

The emails appear to be genuine, but the University of East Anglia said the "sheer volume of material" meant it was not yet able to confirm that they were. One of the emailers, the climate scientist Prof Michael Mann, has confirmed that he believes they are his messages. The lack of any emails post-dating the 2009 release suggests that they were obtained at the same time, but held back. Their release now suggests they are intended to cause maximum impact before the upcoming climate summit in Durban which starts on Monday.

In the new release a 173MB zip file called "FOIA2011" containing more than 5,000 new emails, was made available to download on a Russian server called Sinwt.ru today. An anonymous entity calling themselves "FOIA" then posted a link to the file on at least four blogs popular with climate sceptics – Watts Up With That, Climate Audit, TallBloke and The Air Vent.

The same tactic was used in 2009 when the first 160MB batch of emails were released after being obtained – possibly illegally – from servers based at the University of East Anglia, where a number of the climate scientists involved were based.

One marked difference from the original 2009 release is that the person or persons responsible has included a message headed "background and context" which, for the first time, gives an insight into their motivations. Following some bullet-pointed quotes such as "Over 2.5 billion people live on less than $2 a day" and, "Nations must invest $37 trillion in energy technologies by 2030 to stabilise greenhouse gas emissions at sustainable levels," the message states:

"Today's decisions should be based on all the information we can get, not on hiding the decline. This archive contains some 5.000 emails picked from keyword searches. A few remarks and redactions are marked with triple brackets. The rest, some 220.000, are encrypted for various reasons. We are not planning to publicly release the passphrase. We could not read every one, but tried to cover the most relevant topics."

The use of points instead of commas to mark the thousands when writing a number – highly unusual in both the UK or US – is sure to lead to speculation about the nationality of those responsible.

The message then includes a sample of cherry-picked quotes selected from a small handful of the emails focusing on apparent disagreements between the scientists, the workings of the Intergovernmental Panel on Climate Change, and attempts to block climate sceptics from securing documents from the scientists via freedom of information requests. Many of the same issues were highlighted in the 2009 release.

One of the most damaging claims in 2009 was that Prof Phil Jones, the head of the UEA's Climatic Research Institute had deleted emails to avoid FOI request. One of the reviews into the content of the emails, conducted by Sir Muir Russell, concluded that "emails might have been deleted in order to make them unavailable should a subsequent request be made for them" - something that Jones has denied. At the time CRU was coming under sustained pressure by an organised campaign to release information, which the scientists saw as distracting from their work.

The new emails include similar statements apparently made by the scientists about avoiding requests for information. In one email, which has not yet been specifically confirmed as genuine, Jones writes:

"I've been told that IPCC [Intergovernmental Panel on Climate Change] is above national FOI Acts. One way to cover yourself and all those working in AR5 [the IPCC's fifth Assessment Report] would be to delete all emails at the end of the process".

In a statement, the University of East Anglia said:

"While we have had only a limited opportunity to look at this latest post of 5,000 emails, we have no evidence of a recent breach of our systems. If genuine, (the sheer volume of material makes it impossible to confirm at present that they are all genuine) these emails have the appearance of having been held back after the theft of data and emails in 2009 to be released at a time designed to cause maximum disruption to the imminent international climate talks."

"As in 2009, extracts from emails have been taken completely out of context. Following the previous release of emails scientists highlighted by the controversy have been vindicated by independent review, and claims that their science cannot or should not be trusted are entirely unsupported. They, the university and the wider research community have stood by the science throughout, and continue to do so."

Mann, director of the Earth System Science Centre at Penn State University, who is quoted in the batch of released emails described the release as "truly pathetic".

When asked if they were genuine, he said:

"Well, they look like mine but I hardly see anything that appears damning at all, despite them having been taken out of context. I guess they had very little left to work with, having culled in the first round the emails that could most easily be taken out of context to try to make me look bad."

He said, the people behind the release were

"agents doing the dirty bidding of the fossil fuel industry know they can't contest the fundamental science of human-caused climate change. So they have instead turned to smear, innuendo, criminal hacking of websites, and leaking out-of-context snippets of personal emails in their effort to try to confuse the public about the science and thereby forestall any action to combat this critical threat. Its right out of the tried-and-true playbook of climate change denial."

An ongoing investigation by Norfolk Police into the 2009 release of emails has so far failed to result in any charges or arrests. A spokesperson said:

"We are aware of the release of the document cache. The contents will be of interest to our investigation which is ongoing."

Posted by Rajan Alexander at 12:16 AM