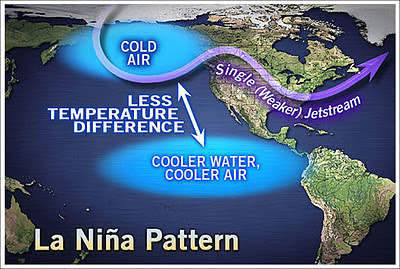 What could periodically change the La Niña winter outlook is what climate scientists call the Arctic Oscillation. This change in sea-level air pressures in the higher latitudes has two phases: one can bring brief, unseasonably warm temperatures and precipitation to the Pacific Northwest during the traditional winter months.

That can mean sudden melting of fresh snowpacks or rain-on-snow melting with accompanying floods.

National Oceanic and Atmospheric Administration officials said the Arctic Oscillation could produce less predictable and dramatic short-term swings in temperatures this winter. Although NOAA expects the La Niña trend to strengthen as fall turns to winter, they call the Arctic Oscillation a "wild card" that can generate strong shifts in the climate patterns that could overwhelm or amplify La Niña's typical impacts.

Dennis Hull, warning coordinator for the National Weather Service in Pendleton, Ore., said the Arctic Oscillation more commonly allows extreme cold air down from Canada, affecting mostly the area east of the Rocky Mountains. Yet it also can allow westerly moving air with mild temperatures and laden with moisture to come sweeping into the Pacific Northwest during the heart of winter.

"There's many variables; we really don't know what phase it will create until it's due to happen in less than 10 days," Hull said.

Kittitas County was hit with flooding incidents in early January and mid-May this year, involving warm temperatures and rain falling on a larger-than-normal snowpack from a La Niña pattern earlier this year.


Chris Lynch, chief hydrologist with the U.S. Bureau of Reclamation in Yakima, said a big snowpack this year has resulted in much more water left in the bureau's five Cascade mountain reservoirs at the end of the irrigation season. As of Nov. 1, the reservoirs were holding nearly 600,000 acre-feet of water, about 56 percent of the reservoirs' total capacity.

"That's 213 percent of average for this time of year," said Lynch noting averages are determined from the past 30 years of record keeping.

"They're holding an unusually large amount of water." Having a large carryover of water into the next irrigation season is a good head start on building 2012 water supplies for all needs in the Yakima River Basin, he said.

Yet he also acknowledged that the reservoirs' capacity to quickly take in sudden runoff is an important flood-control measure for the Yakima River. Even with having the reservoirs holding 56 percent of their capacity, they still have the ability to absorb about 300,000 acre-feet of water.

The January and May flood events in the county resulted in damage to county roadways, bridges, bridge approaches, some homes and outbuildings and other infrastructure. 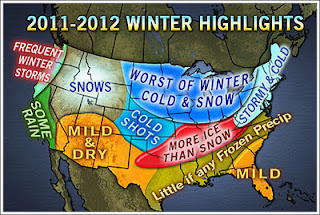 
Kittitas County engineer Doug D'Hondt said the flooding and resulting damage wasn't declared a disaster by state government, but to county government and rural property owners it was a disaster.

"It also was a disaster to our ability to financially make all the repairs," D'Hondt said.

He estimated it's going to be another year before most of the damage will be repaired. D'Hondt said knowing another La Niña weather pattern will likely cause more rain and snow this winter is worrisome.

"What it does is raise a whole lot more uncertainty," D'Hondt said. "We have a prediction that the weather won't be cooperating and won't be spreading out its severity."