This paper was presented at the International Conference on Climate Change: Shifting Science & Changing Policy at Mumbai last month.

Dr. Nils-Axel Mörner, as head of Paleogeophysics & Geodynamics at Stockholm University   worked with sea level problems for 40 years in areas scattered all over the globe; published 546 scientific papers and 10 books on the subject. He was the former President of the INQUA Commission on Neotenotics (1981-89) and INQUA Commission on Sea Level Changes and Coastal Evolution (1999-2003.) He headed the INTAS Project on Geomagnetism and Climate (1997-2003). In 2000 he launched an international sea level research project in Maldives. 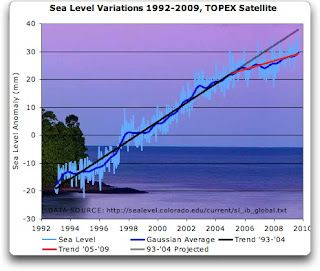 Introductory, we may ask: Why would sea level change?

The ocean level may change for three main reasons:

All these factors can be handles as to rates and amplitudes (1, 2).

• During the deglacial period with maximum climate stress and enormous masses of ice to melt, sea level rose at rates of about 10 mm/year (1 m/cy). This value can be held as an ultimate frame for any possible ice melting effect (2), rather would a realistic value for the present to near-future be well below this value.

• The thermal expansion in the open oceans can hardly exceed 10 cm (2). Towards the coasts, the effect rapidly decreases with depth and becomes zero at the shore (because there is no water to expand and there will be no flush inlands).

• The lateral water mass movements seem to have dominated the local-to-regional sea level changes over the last 6000 or so (1, 3, 4), and are well expressed in satellite altimetry maps (e.g. 5). The group of sea level experts within the INQUA commission on Sea Level Changes and Coastal Evolution, therefore, estimated the probably sea level change by year 2100 at +10 cm ±10 cm (6), later updated at +5 cm ±15 cm (7), which is significantly less than proposed by IPCC (8), but rather in harmony with the mean of 159 global tide-gauge records (9).

President Mohamed Nasheed of the Maldives repeatedly claims: ”We are drowning, our nation will disappear, we have to relocate the people”. In “open letters to the President” (10) have pointed out that this violates observational facts in his own country. Munch-Petersen (11) termed the President’s claims “marketing atoll dynamics as sea level rise”.

In 2005, the United Nation Environmental program predicted that climate change would create “50 million climate refugees by 2010”. We have now passed 2010, and can hence firmly conclude that it was all a matter of disinformation. Recently, it has been claimed that “millions of people will become refugees because of a rising sea level flooding the low-lying coasts of Bangladesh”. All this talk is totally unfounded in observational reality, however.
2.    Back to reality

In order to assess the reality, we need investigations carried our by real sea level specialists in firm field studies in areas under discussion themselves. Computer modelling by persons not even having visited the sites in questions is simply not good enough.

Global maps of sea level changes according to satellite altimetry are constantly being presented (e.g. 5). They change far to much from year to year. More seriously, however, is that they seem not to fit with observational facts at any single point of the globe.

The situation is absurd especially in the Pacific where the maps present a very strong sea level rise on the SW side and a sea level lowering on the East-central side. Still, the tidegauges in Tuvalu, Kiribati and Vanuatu show straight trends lacking any sign of sea level rise (12). Similarly, the tide-gauge of the Galapagos gives a straight-line trend. 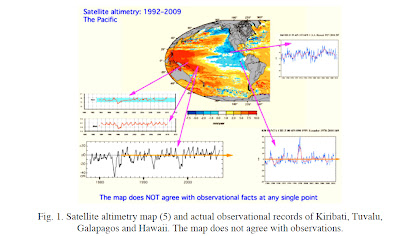 So, if the maps do not agree with nature (Fig. 1), why should we pay any attention to the erroneous maps? Obviously, there are serious problems hidden in the satellite map constructions (9).

In year 2000, we started an international sea level project in the Maldives, where several distinguished sea level specialists took part. Personally, I have been there six times, out of which three were as leader of major research expeditions.

What is to be seen in nature itself, from island to island, is clear and straightforward: There is no ongoing rise in sea level at all. 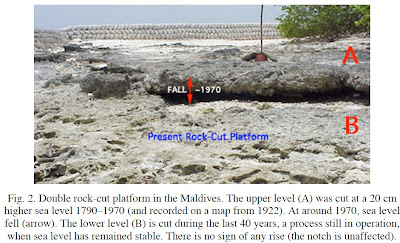 At about 1970, sea level fell by about 20 cm, and has remained quite stable there after (i.e. for the last 30-40 years). We have investigated several different shore environments (open coasts, rock-cut platforms as in Fig. 2, sandy shores in erosion as well as in progradation, lagoons, lakes, fens, etc.) with respect to stratigraphy, morphology, biology and chronology (with 55 new C14-dates). Such an overwhelming mass and quality of observational facts (Fig. 3C) must, of course, outdo idle talk (like what is being claimed by IPCC and exaggerated by President Nasheed). Several scientific reports have been published (13, 14, 15).

In 2009, I visited the Sunderban delta area in Bangladesh and was able to observe clear evidence of strong coastal erosion but no rise in sea level. The stratigraphy, morphology, vegetational evolution and habitation record a minor sea level lowering at around 1960, followed by 40-50 years of stable sea level (Fig. 3B). Those sources of information are superior to local tide-gauges in the Sunderban delta, which seem quite unstable. The results are presented in a scientific report (16).

It seems significant that both the tide-gauge of Mumbai and Visakhapatnam in India record a significant sea level drop in 1955-1962 (Fig. 3A) followed by 50 years of stable sea level (15,16).

2c.   Minicoy in the Lakshadweep 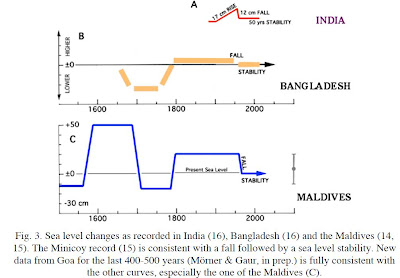 In the Lakshadweep (Laccadives), the locals are quite aware of the fact that sea level is not at all in a rising mode today, rather that new land has been added, leaving previous shore to become overgrown and invaded by terrestrial plant climbers (just as in the Maldives). They also say that they are amused over what the president in Male claims and understand that it is “all a matter of money” (15).

In October 2011, I undertook a sea level investigation along parts of the coasts of Goa, and combined the observations with archaeological information by Gaur. Our findings are clear and straight forward (Mörner & Gaur, in prep.); there is no ongoing sea level rise, sea level has been stable for the last 50 years or so, sea level fell some 20 cm at around 1960 (with age inferred from the Mumbai tide gauge record; Fig. 3), sea remained at a +20 cm level for quite some time (back to 1790 judging from the Maldives records), sea level was well below the present level in the 18th century and some 50-b60 cm above the present in the 17th century (just as recorded in the Maldives). 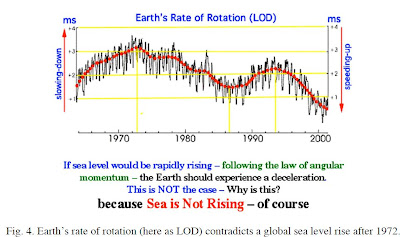 
In conclusion, there is no sea level rise going on in the Indian Ocean (Fig. 2). All talk about an alarming ongoing rise in sea level is nothing but an illusion to be abandoned the sooner the better, because it steals the limelight from real problems in the real world (17).

Session 3 on “The Illusive Sea Level Threat in the Indian Ocean” of ICAMG7 in Goa (October 11) and the conference on “Climate Change: Shifting science and changing policy” at the University of Mumbai (October 14) both included papers on sea level changes in the Indian Ocean (N.-A. Mörner, N.F. Munch-Petersen and A.S. Gaur) and papers on solar-terrestrial interaction and monsoonal variability (W. Soon, R. Agnihorti, K.Selvaraj, M. Khandekar, plus others in Mumbai). Taken together those contributions allow the following final conclusions, which ended Session 3 in Goa.

Posted by Rajan Alexander at 10:12 AM