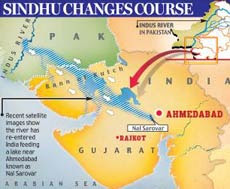 The Indus or Sindhu, a major river flowing through Pakistan around which the great Indus Valley Civilisation flourished, may have shifted course after an earthquake in 1819, but recent satellite images show the river has re-entered India feeding a lake near Ahmedabad known as Nal Sarovar.

The discovery has been made by Rohan Thakkar, a postgraduate student of climate change working on the water bodies of Gujarat.

The development will hugely benefit the water-starved Kutch region as well as the Bhal region adjoining Ahmedabad district.

Speaking to Mail Today, Rohan said he spoke to his father about it after detecting that water from a river in Pakistan was flowing into the Rann of Kutch. Further examination of the satellite images showed the water was flowing from the Indus. 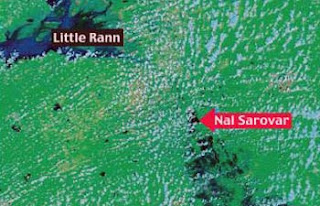 In about four days, water entered the Great Rann of Kutch.

"Same thing happened this year too. In September, water from the river reached the Great Rann of Kutch," Thakkar said.

After inundating the Great Rann, water reached the Little Rann and then Viramgam near Ahmedabad on September 19.

According to the archaeologist, the volume of water was so much that it inundated both the Great Rann and Little Rann, and travelled nearly 500km to Viramgam this year.

"We do have evidence that there were habitations in the Rann of Kutch and the Indus flowed in this area but majorly shifted its course westwards after the great earthquake in 1819," Thakkar said.

While these are signs that the river is steadily shifting its course, siltation in the Indus river basin too could be responsible for the change in course," Rohan said.

Dr Y. T. Jasrai, programme coordinator of the climate control department at Gujarat University, said the phenomenon had been taking place for some time.

"But the actual development came to light when this project was undertaken by Rohan and we realised water from the Indus is actually flowing into the Rann of Kutch," he remarked.

"We have found several Harappan sites, including Lothal, along the Gulf of Kutch dating back to 3700 BC. It is generally believed the Saurashtra and Kutch areas were islands separated by the Gulf of Kutch,"

"At that time, one of the major branches of the Indus was emptying its water into the Great Rann of Kutch," he added.

"However, after the 1819 quake, the Allahbund came up in the northwest of Bhuj as a natural bund and stopped the water from flowing into the Great Rann of Kutch and the area gradually dried up. Successively, the river too changed its course," Ravat added.

"There is nothing surprising if the river now starts shifting eastwards," he said.

Posted by Rajan Alexander at 8:36 AM