Now that Europe calls Time on Green Energy, will their charities in India do the same? 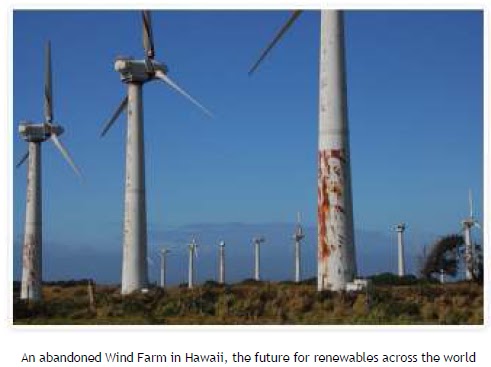 The truth about the extremely high costs of Green Renewable energy is out, as is the truth that there will never be lasting viable Green jobs and now the Renewables industry is in meltdown. Britain is cutting the morally wrong Green tax called a Feed in Tariff from December 12th 2011 for solar installations and now other countries are following suit. Spain was the first economy in Europe to jump on the Green Renewables farce and quickly found that every Green job created cost 2.2 jobs in existing profitable businesses, now it is looking likely that Spain is about to abandon the insanity of prohibitively expensive Green energy Spain’s likely new centre-right government plans a major overhaul of the energy sector, possibly axing subsidies for wind and solar power as the euro zone debt crisis makes funding very costly. The centre-right People’s Party is expected to win a Nov. 20 election by a wide margin and gain control of the lower house. Party leader Mariano Rajoy has repeatedly signalled he will reform the energy sector, without giving details. Spain’s huge rollout of renewable energy made it a world leader in the sector and reduced its dependence on imported fuel, but the result is debt-laden utilities and consumers facing crippling rate hikes to pay for power stations they are hardly using.

Chopping subsidies for new renewable power plants would stop the debt mountain growing and allow consumer energy prices to rise gradually instead of suddenly, smoothing the adjustment to paying true costs for electricity. Lower renewable subsidies would also free up cash for utilities to invest in the PP’s pet project to boost power connections with the rest of Europe, which would help reduce over-capacity in the energy sector and stimulate investment. Big power groups have recently stepped up pressure on the incoming government to tackle a deficit of over 20 billion euros they accumulated by selling power at regulated tariffs too low to cover costs for 10 years. Unlike Germany, which passed the cost of renewable directly onto the consumer, Spain deferred them by obliging utilities to hold these costs on their balance sheets as a state-backed debt known as the “tariff deficit”, promising the consumer would repay this debt through gradual increases in electricity bills. The Socialist government, expected to lose badly in the election after seven years in power, reached a deal with utilities companies last year to eliminate the tariff deficit. A Socialist government and the Green wealth redistribution agenda, no surprises there, it was a Labour Socialist government under Tony Blair who signed Britain up for all sorts of Green lunacy and energy poverty for millions, so Blair could force expensive Renewable energy on the people of Britain. To put that into perspective it was Blair who said in the run up to COP15 in Copenhagen “The world must take action on climate change…even if the science is not correct“, in other words lets proceed with Climate Religion as the means for wealth redistribution and one world government by the UN. In Europe analysts and energy experts are predicting a return to conventional affordable energy cutting short the dash for unaffordable Green energy: Analysts and industry experts see a return of conventional power and imports rather than a wide-ranging government-backed expansion of renewable power. Three of Europe’s top renewable energy companies became the latest victims of a global collapse in prices, massive oversupply and governments slashing subsidies in light of growing debt piles, echoing recent comments from overseas peers. SolarWorld, Q-Cells and Nordex are among the latest renewable energy companies to be hit by a mix of high inventories, slower demand and banks tightening their purses regarding wind parks. Solar companies in particular suffered as they ramped up production last year to meet a surge in demand from Germany and Italy where customers rushed to buy solar panels before governments cut vital subsidies. Both economies are reducing so-called feed-in tariffs to make the solar sector more productive, and subsidies and prices have been falling at a faster rate than manufacturing costs, leading Germany’s renewable elite to slash their 2011 outlooks Britain, Italy and Germany all cutting the Green taxes that make solar economically viable, little wonder that many business analysts reckon that the solar industry, globally, will have ceased to exist by 2015. In Denmark their new Socialist development minister was caught out being a duplicitous Green hypocrite:


Green energy policies currently being pursued are not helping the environment or the economy. More likely, they will lead to greater emissions in China, more outsourcing to India, and lower growth rates for the well-intentioned “green” countries.

When Denmark’s new government ministers presented themselves to Queen Margrethe II last month, the incoming development minister established his green credentials by rolling up to the palace in a tiny, three-wheeled, electric-powered vehicle. The photo opportunity made a powerful statement about the minister’s commitment to the environment—but probably not the one he intended.

Christian Friis Bach’s electric-powered vehicle was incapable of covering the 30 kilometers from his house to the palace without running out of power. So he put the electric minicar inside a horse trailer and dragged it behind his gasoline-powered Citroën for three-quarters of the trip, switching back to the minicar when he neared the television cameras. The stunt produced more carbon emissions than if he had ditched the electric car and horse trailer and driven a regular car the entire distance.

Another Green socialist hypocrite caught out yet again.

Posted by Rajan Alexander at 12:46 PM