In May this year, Oxfam published their new report “Growing Better Future" and five months later ActionAid, their “On the Brink” report. Their key message was one and the same: We are hurling towards mass starvation on account of the synergistic impact of accelerating climate change; degradation of natural resources and untameable food price inflation on an over-populated planet. In the process, these NGOs elevated Malthus's reputation as a prognosticator to the Delphic levels of a Nostradamus.

This is Part I of this paper - the introduction.  International NGOs have changed the labels of their hysteria - from Global Warming to Global Hunger with the philosophical underpinnings of their programmes unchanged. Part II critique the claim that “climate change” being responsible for high food prices and global hunger and concludes that at best these claims are  based on shoddy research and at worst cloaks a Machiavellian agenda. Part III explains how the advocacy of Climate Smart Agriculture and Renewable Energy furthers the eco-imperialistic agenda. Part 4 of this article deals with the attempt of Western countries to finance such a programme by a Global Green Fund and carbon market at the on-going Climate Summit at Durban. However a huge section of African NGOs are  so upset about this funding linked to carbon trading that they signed an open letter to the leaders not to adopt this programme. 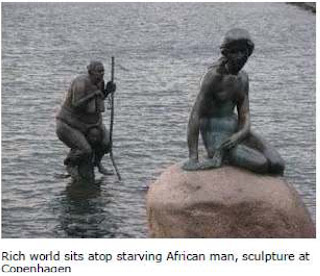 Copenhagen, December 2009.  A public art exhibition was put up as a sidelight to the Climate Summit. Seen in the photograph is the 'Survival of the Fattest', sculpted by artist Jens Galschiot (2004) The sculpture is accompanied by text, reading in part:
I’m sitting on the back of a man.
He is sinking under the burden.
I would do anything to help him.
Except stepping down from his back.

The website goes on to explain: 'The sculpture ’Survival of the Fattest’ is a symbol of the rich worlds (i.e. the fat woman, ‘Justitia’) self-complacent ‘righteousness’. With a pair of scales in her hand she sits on the back of starved African man (i.e. the third world), while pretending to do what is best for him.” The sculpture however was first exhibited in London, 2004 G7 meeting. On that occasion, it apparently was to symbolize the evils of globalization and free trade. In Copenhagen, 2009, it morphed into a new message about climate change with apparently little need to change anything except the captions. So the Justitia sculpture lends itself to whatever we want it to be. So in 2011, I use differently the sculpture changing nothing but the caption again. The text below reads:

'The New Eco-imperialistic Strategy: Under the guise of eliminating hunger in developing countries, they actually conspire to accentuate it.'

In May this year, Oxfam launched their Growing Better Future Report with this apocalyptic warning:

“New research commissioned for this report paints a grim picture of what a future of worsening climate change and increasing resource scarcity holds for hunger. It predicts international price rises of key staples in the region of 120 to 180 percent by 2030. This will prove disastrous for food importing poor countries, and raises the prospect of a wholesale reversal in human development.”

“As the global population hits 7 billion this month, ActionAid has today warned that a triple crisis of climate change, desolated natural resources and rocketing food prices, could dwarf the world’s ability to feed them all."

Though both reports had South Asia and India had a relatively de facto focus, ActionAid went a step higher to even ranked India among the ten most vulnerable countries to what they call as the triple crisis:

"Based on new research in 28 poor countries, ActionAid’s report ‘7 Billion on the Brink ‘ reveals which poor nations are most prepared for this triple crisis and which are burying their head in the sand. The 10 countries ranked most vulnerable – DRC, Burundi, South Africa, Haiti, Bangladesh, Zambia, India, Sierra Leone, Ethiopia and Rwanda - account for a quarter of the world’s population.”

It’s must be one helluva of a coincidence that two UK based charities, through 'new research” of their in-house team, working in parallel, arrived at a singular message - the Malthusian demographic bomb is about to explode and we need to act now to defuse it!

It has become fashionable for NGOs these days, at their drop of their hats, to warn the world of dangers, real or false, and to tell the rest of us what should be done and how we should live our lives. In a democracy it is certainly within their right to do so, that is if they chose to do so. But so it is the right of others to not only critique these claims but to question the legitimacy and accountability of those making these claims. This paper sets off to exactly do the latter.

The timing of the ActionAid report was significant, being launched to coincide with landmark of global population crossing the 7 billion mark last month. Hence it comes as no surprise that this theme sets the philosophical undertone to their whole report.

When Oxfam in May published a similar sounding report, we briefly critiqued it in our blog: CLICK: OXFAM morphs into a Paul Ehrlich clone: Claims world faces mass starvation! But with Oxfam and ActionAid taking to Global Hunger as their new generation global scare, it suggests that a pattern emerging whereby we could see many more NGOs and environment groups jumping into the bandwagon. Hence the need for a more detailed critique.

The proof of the pudding that NGOs created genuine impact is when they make themselves redundant by solving the problem they say they are attempting. But ironically, the more they fail, the more they confer themselves continued relevance. Only continuing crises can ensure continued fund flows. This existential dilemma of NGOs perhaps explains why despite all their publicly self-congratulatory claims of impact or success, global poverty and hunger levels, instead of declining, have actually spiked to dangerous levels, as admitted by Oxfam and ActionAid themselves.

Perverse as it sounds, to clock even more rapid organizational growth rates, NGOs and environmental organizations sometimes stoop to manufacturing crises where none exists.  Climate change and its related themes were one of these creations that was so lucrative that it accounts for more than one-fifth of all income earned by international charities such as Oxfam and ActionAid.

Unfortunately climate alarmism itself is dying a slow and painful death, and now grasping for its last breath. With the expiry of the Kyoto Protocol by the end of 2012; we can expect the formal pronouncement of its death. For NGOs and environmental groups who opportunistically jumped into its gravy train; they now need to latch on to an alternate alarm to ensure that their good times continue unabated. 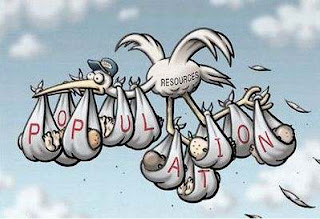 For some time, NGOs and environmentalists toyed with biodiversity and mass extinction as an alternate hysteria but found that this scare did not evoke the same degree of public response as did climate change. Biodiversity was found too abstract and further too divorced from the day-to-day reality of the common man to touch a chord.

This was where climate change had an unique advantage.  Climate could be readily confused with weather and extreme events and lend itself to easily exploit the scientific illiteracy of much of the public and their susceptibility to the substitution of repetition for truth. But the scam has run its course, done in through a combination of errors exposed in the IPCC report; Climategate where hackers made public the emails of IPCC scientists, that showed them conspiring and manipulating data; the growing divergence between alarmist predictions and real world observations and sheer public fatigue of their climate hysteria routines. On the other hand, the present increasing trend of global food inflation and starvation, like climate change is something that the general public can easily relate to as their day-to-day reality.  'In the scope of its consequences for life on planet earth and the immense size of its remedies, global warming dwarfs all the environmental scares of our time put together ’ (Wildavsky 1992, p. xv).  Consequently, global warming remains the mother of environmental scams and it is difficult for NGOs and environmental organizations to even think of giving up its agenda. So what best they can do within the circumstances? Just like the Justitia sculpture, they simply changed the caption. Global Warming is now replaced with Global Hunger but their ideological underpinnings remain unchanged. So we find  ActionAid study says:“Accelerating climate change, growing population and rising food prices pose a triple crisis that could lead to a collapse in global food systems.“ Oxfam says the same things though nuanced and marketed a little differently.