This blog had been one of the first to rule out a Super or strong El Nino. Read here. Now the same international forecasters who hyped a Super El Nino are now betting on a weak event. 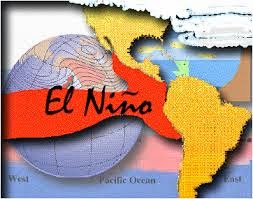 (Bloomberg) El Nino this year will probably be weak, potentially reducing the impact of the event which typically brings drought to parts of Asia and rains to South America, said Commodity Weather Group LLC and AccuWeather Inc.

The chance of a weak pattern is 65 percent and the odds of a moderate one are 35 percent, said David Streit, CWG’s co-founder. The probability of a weak event is 80 percent, said Dale Mohler, a forecaster at AccuWeather. Streit and Mohler have been meteorologists for three decades.

El Ninos can roil world agricultural markets as farmers contend with dry weather or too much rain. Forecasters from the U.S. to the United Nations have warned that the event could happen this year, and Australia’s Bureau of Meteorology said last month the pattern may develop by August. ABN Amro Group NV says confirmation would bolster coffee, sugar and cocoa futures.

“It’s still a tough call on whether this will remain weak or reach moderate” levels, Streit from Bethesda, Maryland-based CWG said in an e-mail to Bloomberg. A weak event is more likely because of the weakening of the warm pool of water below the surface of the Pacific Ocean and “the difficulty in getting the trade winds to weaken significantly,” he said.

El Ninos, caused by the periodic warming of the tropical Pacific, occur irregularly every two to seven years and are associated with warmer-than-average years. The last El Nino was from 2009 to 2010, and since then the Pacific has either been in its cooler state, called La Nina, or neutral.
Weak Intensity

While the Standard & Poor’s GSCI index of eight agricultural commodities climbed 10 percent this year, it’s declined 9 percent from an 11-month high at the start of May on signs of increasing world grain supplies.

Mohler from AccuWeather said that El Nino will probably

“set in during July and last six to eight months. It should be of weak to perhaps moderate intensity.”

In 1997-1998, the strongest El Nino on record back to 1950 helped push the global mean temperature in 1998 up 1.2 degrees to what was then an all-time high of 58.1 degrees Fahrenheit (15 Celsius), according to the U.S. National Oceanic and Atmospheric Administration. The event in 2006-2007 caused droughts in the Asia-Pacific region, more than halving Australia’s wheat output and hurting Indonesia’s coffee harvest.

The probability of an El Nino is around 85 percent and the event should develop by late June, said Donald Keeney, a meteorologist at MDA Weather Services in Gaithersburg, Maryland. The chance of a weak pattern is 35 percent, for a moderate one 50 percent and a strong one 15 percent, he said.

There are signs an El Nino is imminent, presaging changes to global weather patterns, the UN’s World Meteorological Organization said April 15. The U.S. Climate Prediction Center said May 8 that the chances of El Nino developing during the Northern Hemisphere summer exceed 65 percent.