While international models predict possible monsoon failure, Anand Agriculture University (AAU) predicts 33% excess rains for Gujarat. The prediction is based not only on so called scientific meteorological data but equally on astrological inputs! The prediction is touted with a 70% statistical confidence level.

Last year AAU's monsoon calendar predicted that Gujarat will get 24% excess rains viz that the state will get around 988 mm of rain against average of 828 mm. The prediction came a cropper with the state suffering a deficient monsoon.

The stakes are high as AAU is going all out to encourage farmers to opt for more water intensive crops this season and if the prediction fails could result in massive crop failures and farmer suicides. Next year being an election year, such a step could be a big gamble for the electoral fortune of the Narendra Modi Administration. 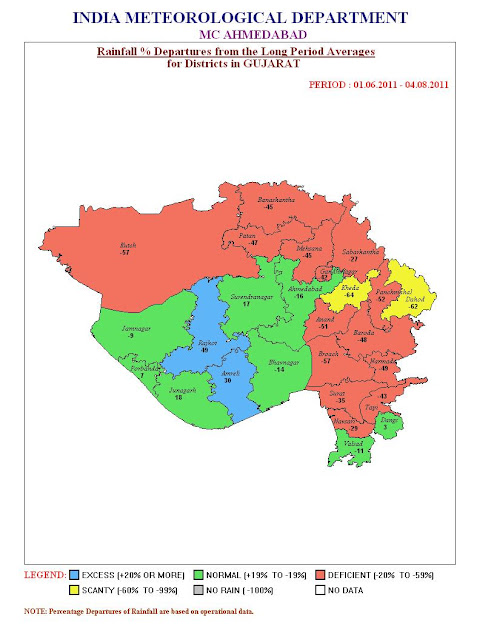 The agriculture meteorology department of Anand Agriculture University (AAU) has predicted 31% higher rainfall for Gujarat this monsoon, as against the average rainfall received by the state.

According to the prediction, Saurashtra will also have 36% higher rainfall this monsoon.

It should be noted that the Indian Meteorology Department has forecast an average monsoon across India this year.AAU publishes a monsoon panchang (almanac) every year which also makes predictions about rain. The predictions are based not only on scientific meteorological data but also on astrological indicators such as the ‘movement’ of planets through the 27 constellations (nakshatras).

Pande also said that though the total precipitation in the state is expected to be high this year, the onset of monsoon will be delayed as it was last year.

On the effect of the higher rainfall on agriculture, Pande said that in the light of the prediction, farmers can go for crops that require more rain. “We should also take advantage of the situation and look at conserving water through water harvesting,” he said.

The monsoon panchang, which is quite popular with the farmers of the state, is likely to be out by May 15. Besides predicting about rain, the panchang also advises farmers on general agricultural practices including how to prepare the land, what to sow, and cropping patterns among others.

According to university officials, the predictions of the panchang have proved right 70% of the time. Interestingly apart from scientists, even astrologers are involved in preparation of the almanac.