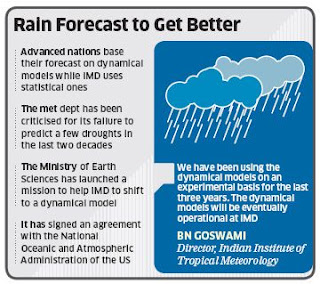 A conference of weather experts organised under the aegis of the World Meteorological Organisation has forecast that rainfall during the coming monsoon period was likely to below normal in the north-west and the southern region, while being close to the normal in the rest of the country.

The meet, which looked at the likely scenario for the coming monsoon season in the south Asian region, was attended by representatives of the WMO, and experts from various climate climates from different parts of the world, apart from meteorologists of the national meteorological service agencies of the South Asian countries and research scientists from different institutions within the country.

In a “consensus statement” issued at the end of the two-day meet, the experts also forecast that for the region as a whole, the monsoon was most likely to be within the normal range, though there was a slight tendency to be below normal.

“The consensus outlook indicates that the large scale summer monsoon rainfall for South Asia and the season [June-September] as a whole would most likely to be within the normal range. However, there is also a slight tendency for the South Asia monsoon rainfall to be below normal.

In terms of spatial distribution of rainfall, there is likelihood for below normal rainfall over some areas of north-western and southern parts of South Asia. Rainfall conditions close to the long-period average are more likely over the remaining parts”.

The statement also noted that there were “large uncertainties” over the forecast because the La Nina phenomenon, which had been prevailing, was weakening and though ENSO-neutral condition was expected to prevail during the course of the season, there was a possibility for emergence of El Nino condition.

“As the possibility of emergence of El Nino cannot be ruled out, there is a need for continued monitoring of the regional and global climatic conditions associated with South Asian summer monsoon”, it said. [El Nino is generally considered to be not a favorable condition for Indian monsoon]

This is the third year such a conference of experts is being organized to come out with a forecast for the monsoon for the south Asia region. Last year, the experts had forecast that the monsoon would be within the normal range for the region, except the north-western parts of the country, where it was predicted to be below normal. But, in reality, rainfall turned out to be normal for the entire region including the north-west India. It, therefore, remains to be seen as to how far the forecast made now comes true.

The forecasts are prepared on the basis of an assessment of prevailing large scale global climate indicators such as the sea surface temperatures over the Pacific Ocean and the Indian Ocean and snow cover over the northern hemisphere.

Posted by Rajan Alexander at 9:43 PM