1. Seasonal Low: For this parameter, the -ve factor from the previous MW (last week) discussion is maintained, as the average day/night temperatures in the Northern/Central Sub-Continent areas remain in near normal/below normal range.

IMD map of day and night temperature of the 17th anomaly explains this. 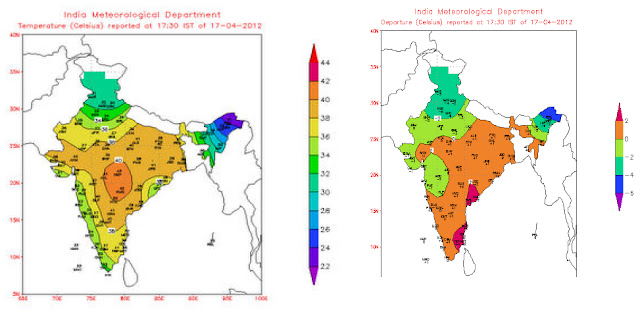 As on 17th. April, the lowest pressure, in the Thar Desert region is at 1002 mb. (though last year was 1006 mb, 2010 was at 1002 mb this time) and this "low" region is restricted to a small area. As mentioned, it normally should reach a low nadir of 994 mb in June, and with 1008mb in the South Arabian Sea, a perfect gradient is created to attract the south -west winds towards the coast.

The quick formation of an optimum Seasonal Low due to persistent A-2 (mentioned in the Vagaries' weekly forecast), and absence of heat wave in Central and Northern regions of the Sub-Continent, continues to be un-favourable.

2. The ENSO is neutral in the Pacific Ocean, with a further warming of the SST in the past 2 weeks. On an average, it is warmer by about 0.1c over the last 15 days.

The SOI is at its lowest level since early 2010, but remains within values indicative of neutral ENSO conditions. The latest (8 April) 30-day SOI value is −3.8, while end of March was +2.8.

3. Last week, the Cross Equatorial Winds,( Monsoon winds), which originate from the Southern Indian Ocean as SE winds, and cross the equator to become south -west, were weak, and not developed.

Let me explain, that the winds before crossing the equator break into 2 branches. 1) gushing into the Arabian Sea, and 2) moving into the Bay of Bengal.

Today, we find, the winds south of the equator better organised for the Bay branch, in the region south of the Andaman Sea. SW Currents are seen off the Sunmatra coast. And that is exactly where the start should be for the SWM to arrive at the Andamans.

The Arabian Sea branch is still struggling to get organised. Here, wind speed off the Kenyan coast has maintained the SE flow. But should re-organise fast.

The Mascarene high pressure zones in the South Indian Ocean, at 1030 mb, between Madagascar and Australia, have been observed, and the "Power House" of the Monsoon winds is slightly behind schedule, for this time of the season.

4. Another factor, which helps the winds gain strength, and bring more moisture into the Indian landmass, is the sea temperatures on both sides of the Peninsula. Optimum (warm) temperatures will hasten and create more clouds, and help in faster forming of the lows from the Bay. 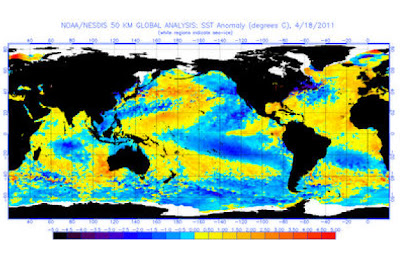 This parameter, is not very "normal" and tilting towards “un-favourable" as on date.

I have put up the SST of this year and of last year as on date. Comparison shows it is slightly "un-favourable" around the equator, where the winds turn for the Arabian Sea.

But the pre Monsoon Low in the Bay is still elusive. As discussed, we should normally see a low sometime after the 15th. of April. But as on today, a high pressure region prevails over the Bay.

5. To bring the existing SE winds above the equator, the ITCZ should move northwards. Around 1st. of May, this should cross the equator.  The ITCZ, is in its "normal" position, as of now, at 5S.

So, overall, we can summarise as:

Most parameters are "Normal" as of today. In today's situation, Monsoon arrival in Kerala could be on normal dates in Kerala and the Bay Islands, and the NE states.

But, situations can change fast, and by the time we discuss the next MW, some factors can suddenly become +ve or -ve. So, MW discusses and follows the developments as they emerge, and discuss the parameters as is where are.

No model can commit from today when the Monsoon can arrive. Things get clearer by last week of April. Vagaries' (in MW) normally remains true to estimates around early May.

Posted by Rajan Alexander at 11:41 PM