India Unlikely to be Hit by Drought, Floods This Year 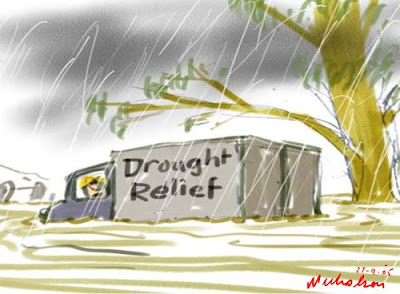 NEW DELHI -- India is unlikely to be hit by a drought or heavy downpours that lead to floods during this year's monsoon, D.S. Pai, head of the country's long-range weather forecaster, said Friday.

The forecast is optimistic for the country's agricultural output as there is no major threat from adverse weather. India has recorded a bumper foodgrain harvest for two years in a row and any fall in the marketing year from July 1 could have jeopardized its food security program.

Although monsoon rains are expected to be normal, the weather office has said there are chances of an El Nino event occurring later in the June-September season. El Ninos usually cause lower rainfall and have mostly resulted in drought-like conditions in India.

"An El Nino generally weakens monsoon rain, but as of now, it is neutral. Even if it builds up, it will likely be weak," the National Climate Centre chief said.

The four-month monsoon accounts for 70% of rainfall in India, where more than 60% of the farmland is rain-fed. Agriculture employs more than half of India's workforce.

Mr. Pai also said there has been no abnormal weather so far to indicate any possible delay in monsoon, which is crucial to staples such as rice and oilseeds as they are sowed when the first rains arrive in early June.

However, he didn't mention an onset date as weather changes even a week before the expected arrival could result in a delay.

Apart from El Nino, thicker snow cover in the northern hemisphere was also of concern as it usually has an inverse relationhip with the monsoon, Mr. Pai said, adding that above-normal temperatures in the Indian Ocean would be positive for seasonal rainfall.

However, Kotak Securities Economist Indranil Pan said in a note that the possibility of a weak monsoon poses upside risks to inflation from food prices.

"The chances of a normal monsoon at 47% are not too bright. We expect inflation at the end of 2012-13 to be 6.0%-6.5%, with upward pressures from any fuel price hikes due to high crude and global commodity prices."