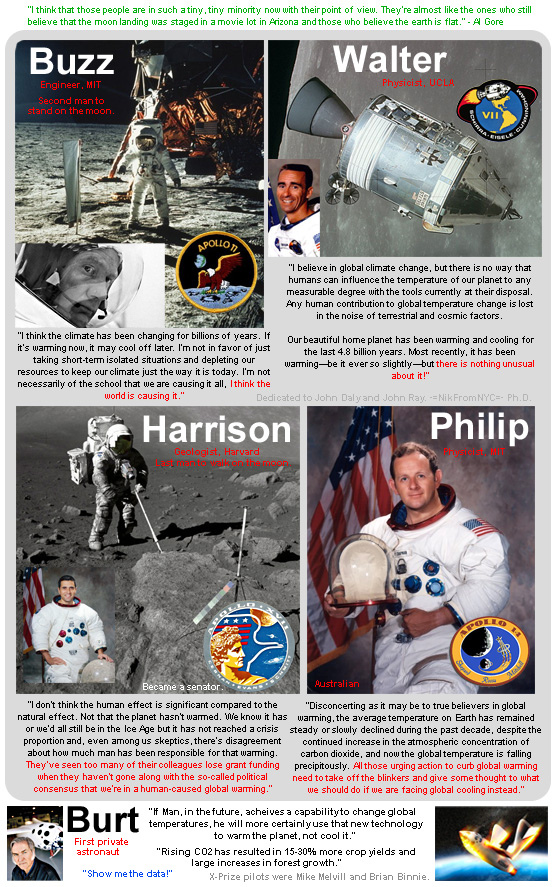 When Chris Kraft, the man who presided over NASA’s finest hour, and the engineering miracle of saving Apollo 13 speaks, people listen.

From the joint letter to NASA Administrator, 49 former NASA scientists and astronauts sent a letter to NASA Administrator Charles Bolden last week admonishing the agency for its role in advocating a high degree of certainty that man-made CO2 is a major cause of climate change while neglecting empirical evidence that calls the theory into question.

Select excerpts from the letter:

“The unbridled advocacy of CO2 being the major cause of climate change is unbecoming of NASA’s history of making an objective assessment of all available scientific data prior to making decisions or public statements.”

“We believe the claims by NASA and GISS, that man-made carbon dioxide is having a catastrophic impact on global climate change are not substantiated.”

“We request that NASA refrain from including unproven and unsupported remarks in its future releases and websites on this subject.”

Science is never settled when scientists look to discover truth.  If someone says "the science is settled" they have forsaken truth to promote an agenda.

But the worst scandal these 50 NASA rebels want addressing is NASA’s forty-year cover up of proof that the greenhouse gas theory was known to be bogus before the corrupt era of James Hansen. Hansen and his GISS cronies had concocted a graphic representation of the energy budget of the Earth whereby the space agency conspicuously contradicted itself in its depiction of back-radiation based on its various graphs on Earth’s radiation budget.

In May 24, 2010 hidden NASA documents surfaced proving that the U.S. space agency had successfully devised unique calculations for the Apollo missions that safely put astronauts on the Moon. Those Apollo calculations – proven correct by the real world success of the moon missions – showed that the ‘blackbody’ numbers of the GHE didn’t apply in our three-dimensional universe.

Thus compelling Apollo evidence demonstrated beyond all reasonable doubt that there was no such thing as a greenhouse gas effect and, if there was no GHE then there could be no catastrophic man-made global warming. If there was no catastrophe to confront then James Hansen was out of a job but $100 billion in taxpayer climate subsidies could be saved.  But dumb is as dumb does and we can still readily find at least 53 crass authority statements preaching that our atmosphere acts just like the glass in a greenhouse.

Posted by Rajan Alexander at 7:03 PM