In our archive, Normal Monsoon Forecast: Indian Ocean Dipole (IOD), we predicted July the month of extreme uncertainty for the monsoon because of a negative IOD. More so as it is the month that accounts for nearly 33% of the SW Monsoon on an average.  Our model assumed a weak IOD maybe upto 4% deficiency for July. But the Regional Institute for Global Change (RIGC) in Tokyo forecast now say that things could go much worse - almost total failure of the monsoon during July.  If so, this is really bad news as next year we can expect another lean monsoon due to the weak El Niño event expected. 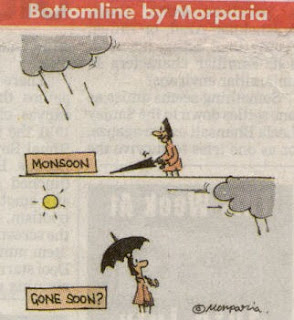 They are forecasting a dismal July for most parts of the country, following a June which could be good in parts only. Northern and eastern parts of north-west India and parts of east-central India might get to see normal rains during June.

But the rain is likely to fail the west coast up to Gujarat, scientists at the Regional Institute for Global Change (RIGC) in Tokyo said.

Jammu and Kashmir, north Rajasthan, Punjab, Haryana and Uttar Pradesh are among the regions likely to benefit from June rains.

East Madhya Pradesh, Chhattisgarh and coastal Orissa and adjoining coastal north Andhra, too, are projected to be gainers.

The crucial July month could likely prove a disaster, if the RIGC model is to be believed.

What could mess up the monsoon this year is the feared negative Indian Ocean Dipole (IOD) event in which the east of the ocean warms up anomalously.

And the RIGC has retained the warning for ‘a weak negative IOD to evolve in early summer and peak towards the autumn.'

The monsoon is said to prosper when the reverse happens – warmth shifting to the west, as it happened on a trot on three years from 2006.

In other analysis, the RIGC said that the tropical Pacific condition has returned to a ‘neutral' state, ending a prolonged La Nina event.

This is what drove the successful monsoon years of 2010 and 2011 after a disastrous El Nino event in year 2009.

The neutral state will continue at least until the end of this year, the RIGC said. It has also forecast a colder winter for the US and Eurasia this year.

Posted by Rajan Alexander at 10:26 PM