The bitter truth that partly explains the IMD's poor credibility is: for nearly a decade now, the weather bureau has been only experimenting with various monsoon prediction recipes, without arriving at a truly dependable one. 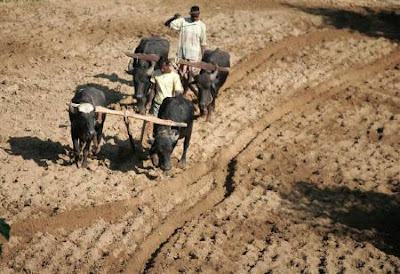 After adverse predictions regarding this year's monsoon by some global weather agencies, the forecast of normal rainfall by the India Meteorological Department seems to have come as a relief for a government combating high food inflation.

The IMD projects total rainfall in the June-September monsoon season as being 99 per cent of the long-period average.

This precipitation is critical for agriculture, given that 65 per cent of farmland is dependent on rainfall, as well as for the country's overall water budget, since the monsoon accounts for about 75 per cent of annual rainfall in India.

However, given the IMD's quite uninspiring record of accuracy, one needs to wait and watch.

After the severe drought of 2002, the IMD was forced to seek out new-generation monsoon forecast models; but, even afterwards, actual rainfall deviated significantly from projections on at least four occasions.

Worse, the new models failed to foretell severe droughts in 2004 and 2009.

In 2004, the IMD projected normal rainfall while it actually turned out to be only 87 per and in 2009, against the predicted 96 per cent, the reality was merely 77 per cent.

The bitter truth that partly explains the IMD's poor credibility is: for nearly a decade now, the weather bureau has been only experimenting with various monsoon prediction recipes, without arriving at a truly dependable one.

The last statistical model, which served rather well for over a decade from 1988 onwards, was the 16-parameter power regression model developed by a team of weather scientists led by V R Gowariker.

This had to be discarded because it turned wayward in its output from 1999 onwards, and totally failed to foresee the 2002 drought.

Notably, while most other countries have now switched to dynamic weather prediction models based on mathematical equations simulating the physics of the global atmosphere, the IMD continues to prefer statistical models.

Should that happen, even if in weak form, it may cause the monsoon to misbehave during the later part of the season when most kharif crops are in their grain development stage and the moisture regime of the soil needs to be built up for the sowing of the subsequent rabi crops.

The real challenge before Indian meteorologists, therefore, is to come up with trustworthy forecast models that can predict total rainfall during the four-month rainy season, as well as the pattern of precipitation in different agro-climatic zones, to serve as a guide for policy makers and farmers alike.

Till then, the IMD's long-range monsoon predictions will be of little significance.

Posted by Rajan Alexander at 3:12 PM