They often denigrate us, climate sceptics, as "deniers". But the fact is that we hardly deny climate change and even global warming at all. What we sceptics actually challenge is the absurd claim that carbon dioxide is the prime driver of climate. We instead snap back - "It's the Sun, Stupid".
In 1996, Henrik Svensmark, a Danish physicist, propounded the theory of cosmic rays and the formation of clouds. Though climate activists laughed at his theory, it found increasing resonance all around the world. In India, physicist and the former ISRO chairman, U.R. Rao published a similar paper on behalf of the Environment Ministry in Current Science, the preeminent Indian science journal.

CERN, the European Organization for Nuclear Research has been conducting experiments using Large Hadron Colliders (LHC).  It uses a gigantic scientific instrument near Geneva, where it spans the border between Switzerland and France about 100m underground. It is a particle accelerator used by physicists to study the smallest known particles – the fundamental building blocks of all things. It will revolutionise our understanding, from the minuscule world deep within atoms to the vastness of the Universe.

Apart from searching for the "God Particle" which they found some preliminary evidence last year, the CERN experiment confirmed the Svensmark theory, at least in part. A full confirmation may confer him the Noble Prize and break the global warmist dam once for all. 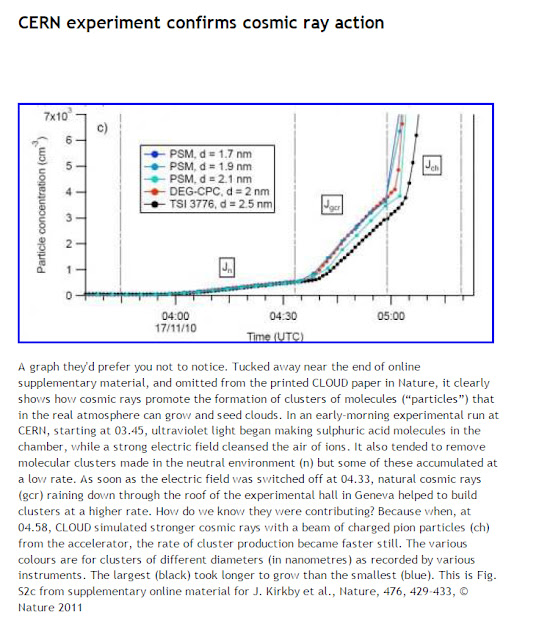 Ever since Henrik Svensmark explained his theory concerning the connection between cosmic rays and the formation of clouds in 1996 in Copenhagen, Denmark, I've received at least 100 emails and letters on the possible 'dawn of the cosmic ray era' in climate science.

Earlier in March, Jerry Boyd sent me this email on cosmic rays. I found his conclusions very interesting to say the least. Here's what he wrote:

"The Svensmark hypothesis posits that periods of global warming and global cooling are explained by the interaction of the sun and cosmic rays. At least until recently, this hypothesis was largely discounted by the global warming advocates, because they contended that solar activity could not be responsible for significant changes in global temperatures. The computer models cited by the Intergovernmental Panel on Climate Control (which is the basis of the so-called 'consensus' on climate science) assumed little or no solar effect on climate. Therefore, global warming theorists settled on a non-solar cause of global warming. Vola! Carbon dioxide became the villain of the hour!

You can understand the dismay when a serious research physicist from Denmark walks onto the stage with a climate hypothesis which is based on a combination of solar magnetic forces and cosmic rays. If he is correct, one of the pillars of global warming theory crumbles. Aspects of the Svensmark hypothesis have been experimentally tested, including using the European particle collider, apparently validated, and are in the process of being published and peer-reviewed.

If this hypothesis holds up, 10 years from now, Svensmark will win a Nobel prize, and the U.S. may decide to try to again be a first-world economy and rejoin with China, India, Russia and Canada, who are not so stupid as the U.S. in believing that you can get by without carbon-based fuels."

In 2011, Svensmark updated his cosmic ray hypothesis. Here are his recent findings:

- Cosmic rays, high-energy particles raining down from exploded stars, knock electrons out of air molecules. The electrons help clusters of sulphuric acid and water molecules to form, which can grow into cloud condensation nuclei - seeds on which water droplets form to make clouds.

- Variations in the sun's magnetic activity alter the influx of cosmic rays to the earth.

- When the sun is lazy, magnetically speaking, there are more cosmic rays and more low clouds, and the world is cooler.

- When the sun is active fewer cosmic rays reach the earth and, with fewer low clouds, the world warms up.

- The sun became unusually active during the 20th Century and as a result "global warming" occurred.

Recently (2006-2010) the sun has been unusually lazy and "global warming" seems to have gone into reverse, as expected by the Svensmark hypothesis.

Coolings and warmings of around 2 degrees Celcius have occurred repeatedly over the past 10,000 years, as the sun's activity and the cosmic ray influx have varied.

Over many millions of years, much larger variations of up to 10 degrees Celcius occur as the sun and earth, travelling through the Galaxy, visit regions with more or fewer exploding stars.

Both Boyd's and Svenmark's conclusions concerning the probable effects of cosmic rays on the Earth's weather, particularly clouds formations, make sense to this climatologist. But, I'm merely 'a watcher in the Idaho woods.' Theories of all types must be proven over specific periods of time. I'm a patient man.