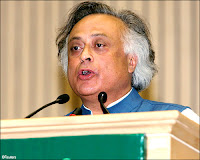 Jairam Ramesh, India's dynamic Environment Minister has done it again. A paper published by his ministry termed UN Intergovernmental Panel on Climate Change (IPCC)'s claim on human induced global warming, as highly exaggerated as the latter's impact is significantly reduced by Galactic Cosmic Rays (GCRs) that is responsible for low cloud formation over earth in the last 150 years.

The paper's lead author was U R Rao, former chairman of Indian Space Research Organisation (ISRO) and was released by Jairam Ramesh himself. Analyzing the data between 1960 and 2005, Rao found that lesser GCRs were reaching the earth due to increase in solar magnetic field and thereby leading to increase in global warming. Says the paper:

“We conclude that the contribution to climate change due to the change in galactic cosmic ray intensity is quite significant and needs to be factored into the prediction of global warming and its effect on sea level raise and weather prediction.” 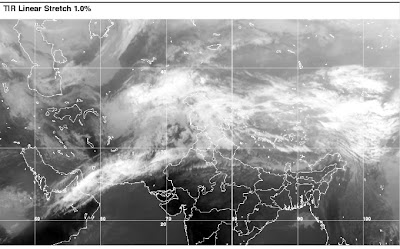 "Consequently the contribution of increased CO2 emission to be observed global warming of 0.75 degree Celsius would only be 0.42 degree Celsius, considerably less than what predicted by IPCC," the paper said to be published in Indian Journal Current Science had said. This is about 44 % less than what IPCC!
I just want to expand scientific debate on impact of non-Green House Gases on climate change, Ramesh said, when asked whether he was again challenging the IPCC. "Science is all about raising questions.... Climate science is much more complex than attributing everything to CO2, said Subodh Verma, climate change advisor in the Environment ministry."

According to the latest report by the IPCC, all human activity, including carbon dioxide emissions, contribute 1.6 watts/sq.m to global warming, while other factors such as solar irradiance contribute just 0.12 watts/sq.m. However, Dr. Rao's paper calculates that the effect of cosmic rays contributes 1.1 watts/sq.m, taking the total contribution of non-human activity factors to 1.22 watts/sq.m.

The continuing increase in solar activity has caused a 9 per cent decrease in cosmic ray intensity over the last 150 years, which results in less cloud cover, which in turn results in less albedo radiation being reflected back to the space, causing an increase in the Earth's surface temperature.
While the impact of cosmic rays on climate change has been studied before, Dr. Rao's paper quantifies their contribution to global warming and concludes that

“the future prediction of global warming presented by IPCC's fourth report requires a relook to take into the effect due to long term changes in the galactic cosmic ray intensity.”

This could have serious policy implications. If human activity cannot influence such a significant cause of climate change as cosmic rays, it could change the kind of pressure put on countries to reduce carbon dioxide emissions. To the runup to the Copenhagen Climate meet, Jairam Ramesh's ministry similarly released a paper that cock a snoot at the UN Intergovernmental Panel on Climate Change (IPCC)'s claim that most of the Himalayan glaciers will melt by 2035. IMr. Ramesh had then released a report by glaciologist V.K. Raina claiming that Himalayan glaciers are not all retreating at an alarming pace. It had been disputed by many Western scientists, while IPCC chairman R.K. Pachauri dismissed it as “voodoo science.” However, Dr. Raina was later vindicated by the IPCC's own retraction of its claim that the Himalayan glaciers would melt by 2035.

Together with Climategate, leaked emails of the Climate Research Unit of East Anglia, UK, the Himalayan Glacier error opened the floodgates for climate sceptic attack that literally tore into tatters the credibility of IPCC's reports so much the organization had to appoint an external review whose recommendations it uses to currently restructure its procedures. No wonder, Pachauri isn’t taking any chances. He promised the Government of India that the impact of GCRs on global warming will be studied in depth in the fifth assessment report to be published in 2013-14. In its earlier four assessment reports, IPCC had not studied the impact of GCRs in detail.

“Since then, Western Ministers have reduced talk about the glaciers to me, they have stopped using it as frequently as a pressure point for India to come on board,” said Mr. Ramesh."

Impact of GCRs on global warming had been highly controversial since 1998, when Henrik Svensmark of Danish National Space Center said it was causing global warming. A decade later a joint European study debunked the claim, saying there was no correlation. Now the UR Rao paper has given a new life for the theory. The real blow to the global warmist movement is when Jairam Ramesh defended climate skepticism and cautioned against foreign funded agendas of environmental organizations and NGOs like WWF, Greenpeace, Oxfam, Christian Aid, ActionAid  in the name of Climate Justice activism etc

“There is a groupthink in climate science today. Anyone who raises alternative climate theories is immediately branded as a climate atheist in an atmosphere of climate evangelists,” he said. “Climate science is incredibly more complex than [developed countries] negotiators make it out to be… Climate science should not be driven by the West. We should not always be dependent on outside reports.”