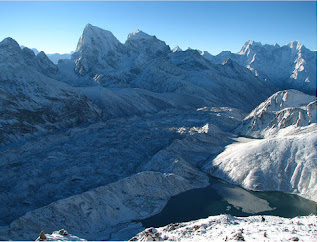 Himalayan glaciers are actually advancing rather than retreating, claims a new peer reviewed study by scientists at the Universities of California and Potsdam found that half of the glaciers in the Karakoram Range, in the northwestern Himalaya, are in fact advancing and that global warming is not the deciding factor in whether a glacier survives or melts. The key factor affecting the advance or retreat of the Karakoram glaciers is the amount of debris strewn on their surface.  Read the full story: The Telegraph, UK

In November 2009, Jairam Ramesh had released a report by glaciologist V.K. Raina claiming that Himalayan glaciers are not all retreating at an alarming pace. It had been disputed by many Western scientists, while IPCC chairman R.K. Pachauri dismissed it as “voodoo science.” The so called "climate justice activist movement” then rose up as one body to the IPCC defense. However, Dr. Raina was later vindicated by the IPCC’s own retraction of its claim that the Himalayan glaciers would melt by 2035, which was slap to the credibility of the movement.   These foreign funded environmental organizations and NGOs had claimed that the Himalayan glaciers that are the source of the rivers like the Ganges could disappear by 2030 as temperatures rise making global warming the greatest threat to the Ganges. They attempted to create mass hysteria by further claiming that this in turn will threaten South Asia’s fresh water supply. The World Wildlife Fund even listed the Ganges among the world’s ten most endangered rivers. In India, the Ganges provides water for drinking and farming for more than 500 million people. But last summer’s floods in northern India has amply illustrated that capacity of these rivers are not so dependent on glacier melt than on the monsoon. Since then the “climate justice” movement has been experiencing reversals one after the other. To revive the flagging fortunes, global warmists were hoping 2010 to be the warmest in recorded history. With 2010 losing out to 1998, it only proved was that there is no evidence of accelerating global warming for the last 12 years. Their indignity does not end here. The last six months we saw some of the worst disasters in recent times - the Russian heatwave; Pakistani, Philippines, Sri Lankan and Australian floods. Though these climate activists did try to whip up hysteria, they found to their horror, climatologists including warmest climate research institutions like NASA and NOAA, ruled this out as a consequence of human induced climate change and instead firmly attributed to these disasters to the La Niña, a natural climatic phenomenon. The La Niña is besides causing global temperatures to plunge significantly with this month’s average global temperature anomaly expected within the negative band. 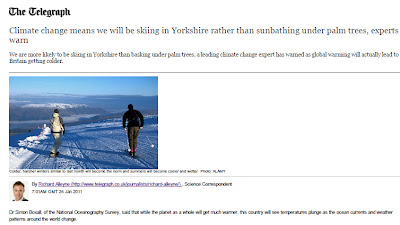 Global warmists had predicted that snow will be rare and extinct and our children need to go to museums to get a glimpse of its artificial re-creation. With this harsh winter, the third record breaking in a row, we had thought will have them red faced. But no. They now unleashed the propaganda that global warming and global cooling are one and the same thing. See the Telegraph article - "As the planet gets warmer, we will feel much colder!". Suddenly, the whole world begins to recognising warmists for who they really are - loonies that should be confined in their cuckoo's nests! The way the global warming scam is collapsing is like watching the Berlin Wall being torn down, concrete slab by concrete slab, brick by brick, with cracks appearing and widening daily on every face. Just two days ago, India questioned a key belief of climate science theology that a reduction in carbon emissions will take care of the bulk of global warming.  In a scientific paper released by the Environment Ministry, renowned physicist and the former Indian Space Research Organization (ISRO) chairman, U.R. Rao, calculated that cosmic rays — which, unlike carbon emissions, cannot be controlled by human activity — have a much larger impact on climate change than The Intergovernmental Panel on Climate Change (IPCC) claims. RK Pachauri promised to address this issue in the next IPCC report, due in 2014. But their coup de grâce is brought home by Jairam Ramesh comments: “There is a groupthink in climate science today. Anyone who raises alternative climate theories is immediately branded as a climate atheist in an atmosphere of climate evangelists.” India openly embracing climate scepticism suggests that their well funded climate advocacy has been reduced to naught in the country. Lest we forget what the “Climate Justice Network” said about the Himalayan Glacier Melt, below are some links to remember. Enjoy.

WWF: The Himalayas – where the danger of catastrophic flooding is severe, and glacier-fed rivers supply water to one third of the world’s population. Royal Bengal tiger – endangered tigers that will lose a large portion of their worldwide habitat as the Sundarbans succumb to sea level rise. The termini of the glaciers in the Bhutan-Himalaya. Glacial lakes have been rapidly forming on the surface of the debris-covered glaciers in this region during the last few decades. According to Jeffrey Kargel, a USGS scientist, glaciers in the Himalaya are wasting at alarming and accelerating rates, as indicated by comparisons of satellite and historic data, and as shown by the widespread, rapid growth of lakes on the glacier surfaces.

Greenpeace: Glaciers in the Himalayas provide the water source for one-sixth of humanity. Now that water source is threatened by climate change. As the temperature rises, these reservoirs of ice disappear.

ChristianAid: Receding glaciers in the Himalaya will threaten the water stocks of millions of people, changes to the yearly monsoon will affect farming and rising sea levels, cyclones will threaten housing around the highly populated Bay of Bengal.


Action Aid: India has already 250 million people that live in absolute poverty with little capacity to cope with climate change.  400 million people living in the Ganga Basin will be further affected by water shortages in the near future.  Many more will be affected by floods and droughts due to erratic monsoons and the fast depletion of Himalayan glaciers.


Millions of rural poor in Nepal could face more hunger as a result of climate change; situation “deeply worrying


Oxfam: Poor crop yields, water shortages and more extreme temperatures are pushing rural villagers closer to the brink as climate change grips Nepal, according to a new report launched by the international aid agency Oxfam. In the report, "Even the Himalayas Have Stopped Smiling:  Climate Change, Poverty and Adaptation in Nepal", farmers told Oxfam that changing weather patterns had dramatically affected crop production, leaving them unable to properly feed themselves and getting into debt. Oxfam called the situation "deeply worrying".

Posted by Rajan Alexander at 11:36 PM