"Genghis Khan and his Mongol hordes had an impact on the global carbon cycle as big as today’s annual demand for gasoline.”

A study published by the website http://carsandpeople.sdsu.edu/ from San Diego State University goes so far to calculate one car is of 18 human equivalents. Accordingly, if Genghis Khan killed 40 million people, this is tantamount to 2,222,222 Genghis Khan Equivalents! Put simply, Genghis Khan and his Mongol hordes had an impact on the global carbon cycle as big as today’s annual demand for gasoline! Explains Julia Pongratz of the Carnegie Institution’s Department of Global Ecology, lead author of this new study on the impact of historical events on global climate published in the January 20, 2011, online issue of The Holocene:

“It’s a common misconception that the human impact on climate began with the large-scale burning of coal and oil in the industrial era.  Actually, humans started to influence the environment thousands of years ago by changing the vegetation cover of the Earth’s landscapes when we cleared forests for agriculture....

We found that during the short events such as the Black Death and the Ming Dynasty collapse, the forest re-growth wasn’t enough to overcome the emissions from decaying material in the soil. But during the longer-lasting ones like the Mongol invasion and the conquest of the Americas there was enough time for the forests to re-grow and absorb significant amounts of carbon.”

The study claimed that the Mongol invasion scrubbed off nearly 700 million tons of carbon from the atmosphere, cooling the planet as it roughly equals the amount of carbon global society now produces annually from gasoline.  Climate Depot further reported that the study concluded:

“Over the course of the century and a half run of the Mongol Empire, about 22 percent of the world's total land area had been conquered and an estimated 40 million people were slaughtered by the horse-driven, bow-wielding hordes. Depopulation over such a large swath of land meant that countless numbers of cultivated fields eventually returned to forests.

In other words, one effect of Genghis Khan's unrelenting invasion was widespread reforestation, and the re-growth of those forests meant that more carbon could be absorbed from the atmosphere...the longevity of the Mongol invasion made it stand out as having the biggest impact on the world's climate."

Ironically, in their enthusiasm to crown Genghis Khan as their new icon, climate activists turn a blind eye to his true legacy.  Khan's empire at the time of his death extended across Asia - from the Pacific Ocean to the Caspian Sea. His military conquests were frequently characterized by the wholesale slaughter of the vanquished. His descendants extended the empire and maintained power in the region for several hundred years, in civilizations in which harems and concubines were the norm. And the males were markedly prolific according to a study published in 2003 in the American Journal of Human Genetics. 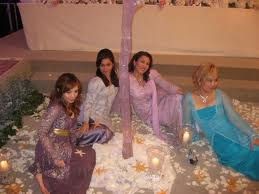 Khan's eldest son, Tushi, is reported to have had 40 sons. Documents written during or just after Khan's reign say that after a conquest, looting, pillaging, and rape were the spoils of war for all soldiers, but that Khan got first pick of the beautiful women. His grandson, Kubilai Khan, who established the Yuan Dynasty in China, had 22 legitimate sons, and was reported to have added 30 virgins to his harem each year. The result, the study estimated 0.5% of all males in the world or 16 million of the world’s population are descendents of Genghis Khan! This excludes those of his army of beasts who raped women at will. So much for Khan and the Mongols depopulating the world!

With Genghis Khan as the new icon, climate activist openly flaunts their anti-life ideology. The latter underpins the foundation of global warmist ideology as they have termed C02, a life giving molecule as a pollutant. The reality is that carbon is the building block for all life on earth. Carbon dioxide is a tiny part of the atmosphere, yet it sustains all life on earth. It is an indisputable fact that vegetation growth and production is enhanced in direct proportion to increased atmospheric carbon dioxide. It provides all of the food and most the energy for the human race. Yet, global warmists want its elimination, and accordingly life itself

That they are not-so-much against life as they are against human life forms is illustrated by a former leader of People for the Ethical Treatment of Animals once declared that "humans have grown like a cancer; we're the biggest blight on the face of the earth." This ideology again leads some to openly discuss the need for “culling” the human race, as if people were livestock. The so-called Climate Justice Movement comprising a coalition of environmental organizations like WWF, Greenpeace etc and NGOs like Oxfam, Christian Aid etc through their policy of supporting bio-fuels and carbon trading have helped operationalized this covert human culling programme. Bio-energy led to:

·         massive displacement of land and farm capacity from food into non-food production;
·         lowering global production of grains and other staples; and
·      marginalization of farm regions, resulting from both decades of globalization, and today's "anti-global warming" scam. 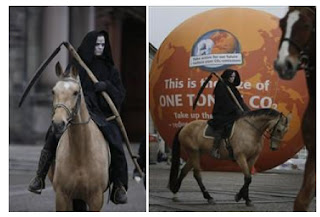 The disastrous impact of the global bio-energy has resulted in price shocks all along the food chain internationally. Straining of water supply sources and soil infertility lay conditions for famine. At the same time, speculation in grain futures on commodity exchanges is setting records. Furthermore, farmers are being herded into participating in "carbon trading".

The result is the World Health Organization (WHO) estimates that over a billion people suffer from mass starvation and nutritional deficiencies. Price escalation of food commodities that put them out of reach of most vulnerable poor communities have led to increasing food riots all over the world. Having contributed to increasing world hunger, the likes of Oxfam and Christian Aid even have the audacity to champion the cause of eliminating world hunger. How thick skin can they get? Even Al Gore has apologized for advocating bio-fuels, but not the likes of Christian Aid and Oxfam.    Patrick Moore, a founding member of Greenpeace, left Greenpeace in the 1980s because it adopted what he described as an “anti-human” and “anti-science” agenda:

“I don’t believe that there is a climate catastrophe; I don’t use the word chaos or disaster to describe the present changes in climate, which are well within natural variations that have occurred in the past history of the earth. Global warming policies that interfere with economic development and disease prevention should be properly viewed an affront to civil rights and human rights”.

Posted by Rajan Alexander at 7:17 PM