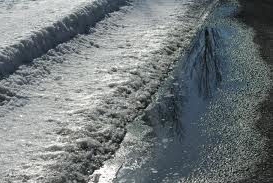 Last month, the big chill in Europe was the second worst in over 300 years. The culprit was a large area of high pressure formed over the Atlantic, blocking the warm Westerlies. One reason we have seen such large amounts of snow is the pressure is much lower than normal, allowing the air to rise and form deeper clouds, therefore producing heavier showers. 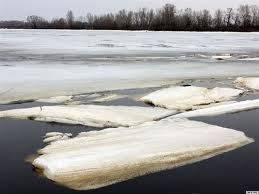 Now comes the sudden thaw in parts Europe as milder Atlantic air overcomes this block. The thaw, after a period of severe winter weather, comes as a relief - but one that has its own risks and challenges. With several days of expected steady rain the continent is bracing itself for unprecedented winter flooding. The cold has frozen rivers and the risk that rivers could flood is high as an unsettled Atlantic weather system moves in, bringing with a rapid rise in the temperature and heavy rainfall. It is the rains coinciding with thaw that ups the risk of nightmare floods. How nightmarish the floods could be will depend upon the intensity of rain on one hand and the rapidity of the thaw. 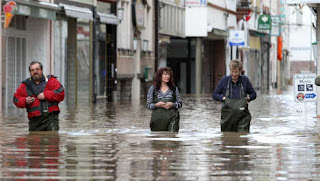 Coastal and tidal flooding can be generated by winter storms, resulting in severe property damage and even the loss of lives. If the water level rises or a thaw begins, large sections of ice in frozen rivers and lakes become jammed at man-made and natural obstructions creating temporary dams, causing severe flooding. For many, that’s a daunting prospect, bringing more dangerously slippery streets, transport disruptions, closed schools and a host of other hindrances to routine daily life.

In Belgium, rivers have already broken its banks.  There has also been widespread flooding because of the thaw and high water level in rivers. According to the Telegraaf, four people have been killed in the floods. The level of the Maas River in Limburg continued to rise on Friday as the thaw continued in the nearby hilly Ardennes region in Belgium. Sandbags are being piled up in areas considered most vulnerable to flooding and farmers in Noord-Brabant have been warned to remove cattle and other livestock from fields close to the river. Officials expect the river to reach its maximum height in Maastricht by Saturday morning at the latest.

In Paris, the level of the Seine River is now high enough to prevent any car traffic on the “voie sur berges,” the fast lanes crossing the city centre from west to east. The Seine River reached its highest level of the year, causing Paris to issue a yellow warning, and all tourist boats, the so-called “bateaux-mouches,” were forbidden from being on the river. In 1910, large areas of Paris were flooded when the River Seine burst its banks. The .question, is whether Paris would be luckier this time? 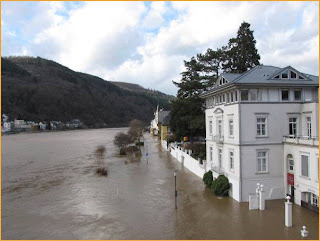 In the UK, the thaw could see the west of England bask in temperatures up to 11C, brining chaos as thawing ice and snow causes floods.  The worst floods the UK experienced in recent times goes back to 1947 where heavy rain on impermeable frozen ground coincided with the thaw after a severe winter. If rains are heavy, this week’s thaw could equal or beat the 1947 floods.

In Germany, a particular concern is the water levels along the Rhine near Koblenz, which could reach eight metres and cause flooding.  “The last time for that was back in 2001,” said a local official, explaining that a level of 7.20 metres would flood the point known as the Deutsches Eck where the Mosel meets the Rhine. With the Rhine’s water levels expected to peak only at the start of next week, the city’s fire brigade is already preparing for parts of the Koblenz old town to be submerged. The flooding also threatens the construction site of a national garden show to be held there. Water levels on the Mosel could rise to 10 metres this weekend, according to officials. With widespread house flooding expected at nine metres, communities have begun preparing sandbags and pumps. 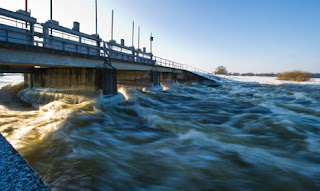 But the flood misery of Europe does not end there. Forecasters do not expect the warmer spell to last long, as a renewed arctic blast could plunge Europe back into sub-zero conditions by next weekend, or even earlier. High pressure is expected to intensify again in the Atlantic bringing even colder air. The thaw-floods,-big chill- thaw cycle to last till February or even into early March.

In the western state of Rhineland-Palatinate, emergency services are bracing for what is expected to be the most severe flooding across the country. Parts of eastern Germany are also preparing for continued high water. Only the state of Hesse, which borders Rhineland-Palatinate, has reported easing water levels. In North Rhine-Westphalia state, to the northwest of Hesse, further flooding was expected to hit the city of Koblenz, which sits at the confluence of the rivers Rhine and Moselle.

Authorities there said Monday water levels were still climbing, and that local residents could expect heavy traffic disruptions due to street closures. Rescue services in the city said they have strengthened flood protection measures. According to estimates, some 30 municipalities between Koblenz and Trier, which lies some 130 kilometers (about 80 miles) upstream on the Moselle, were experiencing flooding.

The high waters have taken the country by surprise after unseasonal warm weather thawed snow and ice around the country. Over the weekend, a 50-year-old kayaker was found dead in the river Enz near the southwestern city of Pforzheim, while in Bavaria, a 67-year-old man died after melting snow loosened scaffolding on a building site, which then hit the man on the head.

On Sunday, towns in the wine-growing region along the Moselle, including Cochem and Zell, were flooded with several meters of water, but authorities said Monday that waters there had begun to recede. Parts of Cologne were also flooded, in some areas up to 8.19 meters, or some 30 feet. In the central state of Thuringia, road bridges had to be closed in response to the floods, with more meltwater expected later in the week. Initial flooding on secondary rivers in the eastern state of Saxony-Anhalt has also put authorities on high alert. Rail travel was also affected, as trains had to be diverted away from flooded tracks in the city of Wuppertal in North Rhine-Westphalia.

In neighboring Belgium, emergency services are on the highest level of alert, according to the Belga news agency. Some local authorities were distributing bottled water.

Posted by Rajan Alexander at 1:14 PM