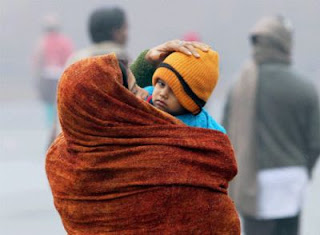 The US National Aeronautical and Space Administration (NASA) has termed as ‘deadly' the 2010-11 winter bearing down on north India. The cold even reached the city of Agra, where the mercury plunged to only one degree above freezing, NASA said in a recent report.

Northern parts of the country have been chilled by the cold wave that prompted officials to distribute blankets and firewood to those in the usually temperate region but without adequate shelter.

An image taken by NASA's Terra satellite on January 14 showed a dense haze stretching from the foothills of the Himalayas southward into the metropolitan areas of New Delhi, Lucknow, Patna and Kolkata. The haze was due to a combination of cold-weather fog thinning during the daytime, burning of wood and other fuels to battle the chill as well as farmers setting agricultural burns typical of the season.

The ensuing smoke reduced visibility caused extensive disruption to rail, road and air transportation across the region over the past three weeks.

Meanwhile, the Nasa report coincided with the latest national agro-met advisory bulletin brought out by the India Meteorological Department (IMD) that called on farmers to arrange for more smoking around the field to prevent the crops from cold/frost injury.

Minimum temperatures have been below normal by 3 to 5 deg Celsius over parts of Punjab, Uttar Pradesh, east Madhya Pradesh, north Chhattisgarh, Bihar, Jharkhand and interior Orissa, the IMD report said. Farmers in these regions have also been advised to apply light and frequent irrigation to the standing crops.

In Telangana and Rayalaseema in peninsular India, the nurseries of vegetables may be covered with polythene sheet to protect seedlings from cold/frost injury.

But low temperature conditions prevailing in Punjab and Uttar Pradesh are favourable for the wheat crop which is at tillering stage. However, frost damage of potato has been reported in parts of Uttarakhand. Frost has been reported also from Malwa plateau in Madhya Pradesh. The bulletin advised farmers to apply light and frequent irrigation to standing crops and arrange for smoking around the field. Nurseries of the vegetable crops are particularly vulnerable and should be protected by covering with plastic sheets.

Taking the advantage of mostly dry weather in several parts of the country, farmers were advised to adopt intercultural operation to the crops followed by irrigation.

As the maize crop is sensitive to moisture and nutrients, stress irrigation and nutrient management have been advised for better yields and to help the cob attain full length with good quality grains.

Tomato may be adversely affected due to frost in Meghalaya and needs irrigation. Early harvesting may also be useful in saving the crop, the bulletin said.

Crops are in good condition in southern States of the country. However, given lack of any significant rain, irrigation may be applied to the standing crops to ensure good harvest.