Curiously, a couple of exceptions aside, the official meteorological departments around the world initially refused to even term the current La Niña as strong, calling it moderate. No more. They now concede it as the strongest on record, some terming it a climatic monster. Then again, they were initially hesitant to forecast it as a multi-year one, their computer models first indicating it would peak sometime the last quarter of 2010 and then subsequently revised to the first quarter of 2011. No more. Now, almost everyone is in unison that it would be multi-year. The current La Niña is expected to last through the next northern winter and its residual effect to linger on until 2012.

This blog on the other hand was predicting almost right from the current La Niña’s inception, it would likely to be multi-year and a monster event. Our rationale: Rapid flips like this in the past have ended up precipitating a two-year La Nina, such as right after the El Nino episodes of 1972-73 and 1997-98. Last year's transition from El Nino to La Nina was about the most sudden ever. 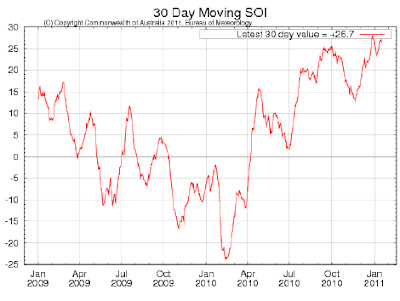 Though there are many parameters that the current La Niña exceeds in thresholds, the two important ones are the Southern Oscillation Index (SOI) and La Niña 3.4. 21.1, the average August-December SOI for current La Niña is exceeded only by the La Niña of 1917-18 which was 24.4. But for the last two months, as seen from the above graph, the current La Niña is averaging around 27 - the strongest seen on record. 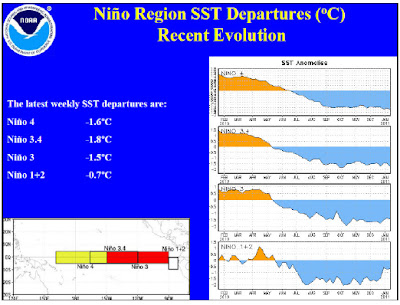 [Sustained positive values of the Niño 3.4  above -0.5C  may indicate a La Niña event, while sustained negative values above +0.5C may indicate an El Niño event. Values of between about +0.5C and −0.5C generally indicate neutral conditions]

Average global temperature anomaly for 2010, a strong El Niño year, was + 0.41C, the baseline period used to determine is a 20-year (1979 to 1998) period at the beginning of the satellite record. There is now a consensus that 2011 would be a cold year, with average global temperature in the negative band. The only speculation is how far down will be temperatures plunge? Would it be as 1999-2000 when it touched -0.4C or- 0.6C in 1985, where cooling was aided by the volcanic eruption of Mt Pinatubo? A multi-year, strongest on record La Niña gives the current one with a chance to equal or surpass these record cold years. And because it is multi-year and sustained cooling, it can totally erase last year’s strong El Nino warming.
Global warmist have this nasty habit of creating hysteria whenever global temperatures spike and keeping silent when they plunge, displaying their “character & integrity”. But 2011 is a very different ball game with climate skeptic movement on the roll who would grab the opportunity to create awareness that movement of temperature in either direction is part of natural variability of the climate and not anything to do with CO2. 2009 was declared the year of the climate skeptic. The outcome of Climategate, leaked e-mails from the Climate unit in UK that revealed collusion, falsification of data, suppression of contrary opinion, political interference and fraudulent scientific conclusions - that moulded public perception away from the science. In January 2010, the IPCC was exposed for a series of errors and making claims based on high confidence levels when in reality they had no hard scientific evidence. These two events largely contributed to the skeptic surge all over the world and global warming hysteria has been lying in the ICU, terminally ill ever since. This year’s La Niña will rescue it from this misery with global warming likely to be declared dead and cold finally.