What happens when WWF is in charge of the weather?


Remember “One flew over the Cuckoo’s Nest”, the popular Jack Nicholson 70s movie??  The UK Met Office failed their winter forecast once again and Lawrence Solomon terms their failure as something similar! It is based on the UK Met Dept forecast that global warmists claim a 4C rise in global temperatures by end of this century!

What happens when WWF is in charge of the weather?
Courtesy: Lawrence Solomon, Financial Post 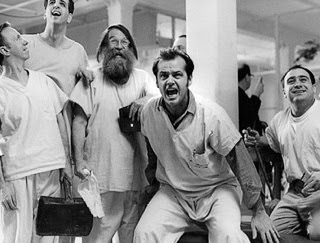 What happens when the inmates run the insane asylum? This experiment is being run in the UK, where the ultra-green former head of the World Wildlife Fund UK and other global warming activists were put in charge of running the country’s Meteorological Office, the country’s weather department. The Met Office is now embroiled in national scandals — and it has become the likely subject of a Parliamentary Inquiry — because the true believers at the helm appear to have been playing around with the weather.

One scandal involves the UK Met’s reliance on models that predict global warming. Using this flawed research, the Met has been getting its forecasts spectacularly wrong, leading to turmoil when the government was subsequently ill-prepared to clear roads of snow. “Investment in more equipment may not be economic, given rarity of British snow,” stated one article in the Guardian, explaining a government-commissioned report that highlighted the silliness of preparing for weather conditions that won’t occur under global warming. “Are you happy to invest more in kit that may sit at the back of the depot and won’t be used?” the report’s author stated rhetorically.

The parliamentary hearings will likely also deal with politicization of the weather, designed to avoid embarrassing the UK’s pro-global warming government, prior to the UN’s global warming conference in Cancun in December. By October, the Met Office realized that the country could be in for “an exceptionally cold winter” and advised the UK cabinet – a big promoter of Cancun — of this turn of events. Yet the Met decided not to let the public in on its revised forecast. To the contrary, throughout October and November, the Met continued to claim that 2010 would likely be the hottest year on record.

The Met Office fries while the rest of the world freezes
Courtesy: Christopher Booker, The Telegraph 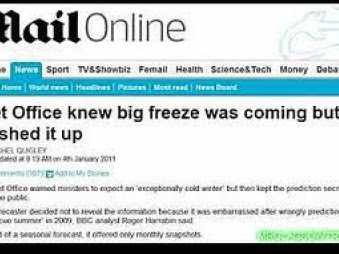 First it was a national joke. Then its professional failings became a national disaster. Now, the dishonesty of its attempts to fight off a barrage of criticism has become a real national scandal. I am talking yet again of that sad organisation the UK Met Office, as it now defends its bizarre record with claims as embarrassingly absurd as any which can ever have been made by highly-paid government officials.

Let us begin with last week’s astonishing claim that, far from failing to predict the coldest November and December since records began, the Met Office had secretly warned the Cabinet Office in October that Britain was facing an early and extremely cold winter. In what looked like a concerted effort at damage limitation, this was revealed by the BBC’s environmental correspondent, Roger Harrabin, a leading evangelist for man-made climate change. But the Met Office website – as reported by the blog Autonomous Mind – still contains a chart it published in October, predicting that UK temperatures between December and February would be up to 2C warmer than average.

So if the Met Office told the Government in October the opposite of what it told the public, it seems to be admitting that its information was false and misleading. But we have no evidence of what it did tell the Government other than its own latest account. And on the model of the famous Cretan Paradox, how can we now trust that statement?

Then we have the recent claim by the Met Office’s chief scientist, Professor Julia Slingo OBE, in an interview with Nature, that if her organisation’s forecasts have shortcomings, they could be remedied by giving it another £20 million a year for better computers. As she put it, “We keep saying we need four times the computing power.” 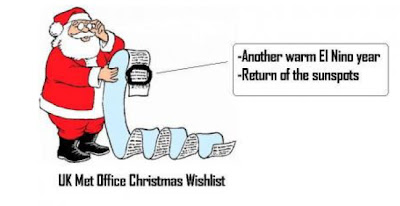 Yet it is only two years since the Met Office was boasting of the £33 million supercomputer, the most powerful in Britain, that it had installed in Exeter. This, as Prof Slingo confirmed to the parliamentary inquiry into Climategate, is what provides the Met Office both with its weather forecasting and its projections of what the world’s climate will be like in 100 years (relied on, in turn, by the UN’s Intergovernmental Panel on Climate Change). Prof Slingo fails to recognise that the fatal flaw of her computer models is that they assume that the main forcing factor determining climate is the rise in CO2 levels. So giving her yet more money would only compound the errors her computers come up with.

In another interview, just before Christmas, when the whole country was grinding to a halt in ice and snow, Prof Slingo claimed that this was merely a local event, “very much confined to the UK and Western Europe”. Do these Met Office experts ever look beyond those computer models which tell them that 2010 was the second hottest year in history? Only a few days after she made this remark, the east coast of the USA suffered one of the worst snowstorms ever recorded. There have been similar freezing disasters in south China, Japan, central Russia and right round the northern hemisphere.

The only evidence the Met Office and its warmist allies can adduce to support their belief in the warmth of 2010 is that in certain parts of the world, such as Greenland, Baffin Island and the southern half of Hudson Bay, it was warmer than average. Yet even there temperatures are currently plummeting: Hudson Bay and Baffin Island are rapidly freezing, at well below zero.

The desperate attempt to establish 2010 as an outstandingly warm year also relies on increasingly questionable official data records, such as that run by Dr James Hansen, partly based on large areas of the world which have no weather stations (more than 60 per cent of these have been lost since 1990). The gaps are filled in by the guesswork of computer models, designed by people who have an interest in showing that the Earth is continuing to warm. 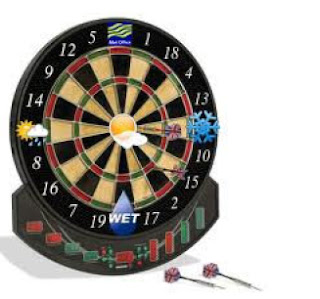 It is this kind of increasingly suspect modelling that the Met Office depends on for its forecasts and the IPCC for its projections of climate a century ahead. And from them our politicians get their obsession with global warming, on which they base their schemes to spend hundreds of billions of pounds on a suicidal energy policy, centred on building tens of thousands of grotesquely expensive and useless windmills.

A vivid little reflection of how our whole official system has gone off the rails was the award in the New Year’s Honours List of a CBE, one rank lower than a knighthood, to Robert Napier, the climate activist and former head of the global warming pressure group WWF-UK, who is now the Met Office’s chairman. The more the once-respected Met Office gets lost in the greenie bubble into which it has been hijacked, the worse it becomes at doing the job for which we pay it nearly £200 million a year, and the more our Government showers it with cash and honours.

Meanwhile, in the real world, another weather-related disaster is unfolding in the Sea of Okhotsk, off the coast of Russia north of Japan, where the BBC last week reported that a group of Russian “fishing trawlers” had got stuck in “30 centimetres” (a foot) of ice. It didn’t sound anything too serious. But, as my colleague Richard North has been reporting on his EU Referendum blog, the BBC underestimated the scale of what is happening by several orders of magnitude. 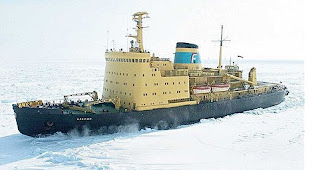 Although several smaller ships have now escaped, the two largest are still trapped in up to six feet (two metres) of ice – including one of the world’s biggest factory ships, the 32,000-ton Sodruzhestvo. They still have more than 400 men on board. Three Russian ice-breakers, including two huge 14,000-tonners, are engaged in what looks like a forlorn bid to free them. A 14,000-ton ice-breaker can scarcely clear the way for a ship well over twice its size. And as the weather worsens, with gales, blizzards and visibility often reduced to zero, the chances of helicoptering the men to safety seem sadly remote.

The mystery is why the Russians should, in the middle of winter, have allowed such a fleet of ships into a stretch of sea known as ''the factory of ice”. This is because all the rivers which empty into it from the Russian coast lower its salinity, making it prone to rapid freezing. But the Sea of Okhotsk has long been held out by the world’s warmists as an example, like the Arctic, of waters which, thanks to global warming, will soon be ice-free.

As we know from Prof Slingo, however, all this cold weather we are having at the moment is a local event, “very much confined to the UK and Western Europe”. Perhaps the Russian fishing fleet took the word of the Met Office, assuming that ice was a thing of the past. As the ice-breakers struggle to reach the hundreds of trapped men, and still-thickening ice threatens to start crushing the hulls of their ships, it seems that, short of a miracle like that which saved the Chilean miners, a major tragedy could be unfolding.

Meanwhile, the sad little nonentities in charge of our Met Office prattle on, extending their begging bowls – and our politicians who have put them there remain smugly and inanely oblivious to anything happening out there in the real world.