Both Greenpeace and IPCC take a huge credibility blow 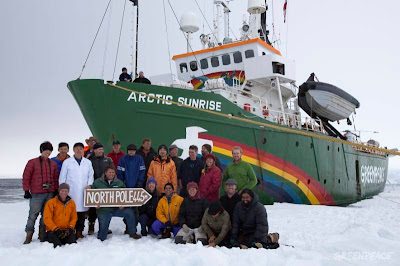 A July 15 2009 Greenpeace press release entitled “Urgent Action Needed As Arctic Ice Melts,” stated that global warming will lead to an ice-free Arctic by 2030. The conclusion was based on data gathered by Greenpeace ship "Arctic Sunrise" Little did the crew realise when the photograph was taken that they will later endup the butt of a joke for this outlandish claim.  In an interview with the BBC’s Stephen Sackur on the “Hardtalk” program, the then Greenpeace chief, Gerd Leipold initially attempted to evade the question but was ultimately forced to admit that Greenpeace had made a “mistake” when they claimed Arctic ice would disappear completely in 20 years.

The Inter-governmental Panel on Climate Change (IPCC) that was established by the United Nations (UN) to exclusively study the anthroponegic causes to Climate Change in their report of 1990 concluded that temperatures during the Medieval Warm Period (MWP) were higher than present times while it was much cooler during the Little Ice Age (LIA). That meant the very raison d'être of IPCC was put to question - If the MPA was warmer than today, with no greenhouse gas contribution, what would be so unusual about modern times being warm also? So to prove there was a a discernible human influence on global climate they changed their 1990 graph in their next report as seen above. In doing so, the IPCC did away with both the MWP and LIA.  This was the infamous hockey stick graph that was proved later as a fraud.

Historical records from all over Europe, and Greenland attest to the reality of both events, and their profound impact on human society. For example, the colonisation of Greenland by the Vikings early in the last millennium was only possible because of the MWP. During the Little Ice Age, the Viking colonies in Greenland collapsed, while the River Thames in London often froze over, resulting in frequent `frost fairs' being held on the river ice.

A new peer reviewed research based on archeological excavations, published in the Proceedings of the National Academy of Sciences, confirmed  both MWP and LIA. The present temperatures in Greenland range from a maximum of 7C in July to -9C in January to inadequate farming and dairying. And yet, archeological evidence points otherwise suggesting that temperatures were much higher in the past that in turn imply that the rate of  Greenland's ice sheet melt were that much higher than present times.

We provide below a related post by the world's most popular science blog, WUWT

In 891 AD "Eric the Red" set off from Iceland with a few followers to explore a land to the west which they had probably spotted some time before while sailing out in their longboats, and then returned three years later with about 500 fellow Vikings. At first they settled on the south-east coast, close to the tip of this new land and then, as the population grew, created a further settlement to the south-west. They called their new home ‘Greenland’.

It has been said that this name was a ‘spin’, a publicity stunt to entice more Vikings to come to join the new settlers, but this would have been pointless if it had been impossible for them to survive. They must at least have been able to create their own dwellings, build their own fires, make their own clothes and above all, grow their own food. The settlers might have been able to trade such things as polar bear-skins and fox furs for iron and other necessities on occasional trips to Europe, but their compatriots in Denmark and Iceland would have been neither able nor willing to row their longboats out each month with groceries.

At present, the temperatures in Greenland range from a maximum of 7C in July to -9C in January. This is too cold for grain such as wheat and even rye to grow and ripen in the short summer of such northern latitudes. Nor are sheep and cattle happy at those temperatures. Hill sheep might be able to nibble away at moss and short grass, but cattle need lush meadows and hay to fatten and live through a winter. Solid wood is needed for building, boat building and warmth, but only bushes and such weak trees as birch now grow in Greenland.

In 1991, two caribou hunters stumbled over a log on a snowy Greenland riverbank, an unusual event because Greenland is now above the treeline. Over the past century, further archaeological investigations found frozen sheep droppings, a cow barn, bones from pigs, sheep and goats and remains of rye, barley and wheat all of which indicate that the Vikings had large farmsteads with ample pastures. The Greenlanders obviously prospered, because from the number of farms in both settlements, whose 400 or so stone ruins still dot the landscape, archaeologists guess that the population may have risen to a peak of about five thousand. They also built a cathedral and churches with graves which means that the soil must have been soft enough to dig, but these graves are now well below the permafrost.

There is also a story in ‘Landnamabok, the Icelandic Book of Settlement, which tells of a man who swam across his local fjord to fetch a sheep for a feast in honour of his cousin, the founder of Greenland, Erick the Red. Studies of Channel swimmers show that 10C would be the lowest temperature that a man would be able to endure for such a swim, but the average August temperature of water in the fjords along the southern Greenland coast now rarely exceeds 6C. The water at that time must therefore have been at least 4C warmer and probably more than that which means that the summer temperatures (for the air) in the fjords in southern Greenland would then have been 13C-14C, as compared with the present temperatures mentioned above.

It follows that temperatures must have been higher than those of today’s during that first settlement of Greenland which lasted from approximately 900 until the mid-1400s AD, when these settlements died out. There is no written explanation for this sudden demise but climate scientists have discovered that Iceland, like the rest of Europe, was gripped by a rapid and centuries-long drop in temperature, known as the Little Ice Age. And in a recent study, William D’Andrea and Yongsong Huang of Brown University, Providence RI have traced the variability of the Greenland climate over a period of 5,600 years when previous inhabitants were also subjected to rapid warm and cold swings in temperatures 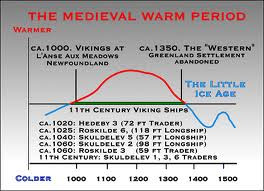 Yet the whole reason for the existence of the Intergovernmental Panel of Climate Change (IPCC) is to thrust upon the world’s population the idea that industrialisation in the West over the last 100 years and our profligate use of fossil fuels is producing a run-away heating of the planet through the emission of greenhouse gases, mainly CO2, which unless checked will lead to its — and humanity’s — death.

The western governments are happily looking forward to a vast increase in taxes to pay for measures to reduce ’carbon emissions’ and even the possibility of a Global Government to control everything has been mentioned. So the possibility that temperatures were higher in the past in any part of the world was a thorn in the sides of those Climatologists who are wedded to the whole idea of Anthopogenic Global Warming (AGW), also known as Climate Change. Unfortunately for them, an English Climatologist, Hubert H Lamb, first formulated the idea of a Medieval Warming Period (MWP) in 1965 and other surveys have found that this warming did not just occur in the northwestern hemisphere but was global (6). Lamb founded the UK Climate Research Unit (CRU) in 1971 and until the mid 1990s the MWP was undisputed fact and was shown even in the IPPC progress report of 1990. But Dr David Darning (University of Oklahoma College of Earth and Energy) in his recent testimony to Congress said ‘…I received an astonishing email from a major researcher in the area of climate change. It said

“We have to get rid of the Medieval Warm Period”’ And this the ‘warmist’ Climatologists certainly tried to do.

In 1998 a graph was produced by geophysicist Michael Mann, known as the Hock Stick Graph’, which managed to almost air-brush out of existence the Medieval Warming Period. This was published in the eminent scientific magazine Nature and also in several places in the IPPC Report of 2001 and created a world-wide sensation. Here was proof positive the world was overheating and it was All Our Fault.

However, investigation of the graph by historians and climatologists who doubted the existence of global warming brought criticism centred around the statistical method used and the associated computer programme. It was eventually called the most discredited study in the history of science and quietly dropped by the IPPC from the latest 2007 IPPC report for policy makers.

The Hockey Stick graph had also attempted to remove the Little Ice Age which was another world-wide event, lasting from roughly the early 14th century to the mid-19th century with short interspersed warm periods. It is well-known from written reports that temperatures must at times have been considerably lower than in the Medieval Warming Period since Frost Fairs were often held on the frozen Thames until 1814 and in 1658, during the coldest period of the Little Ice Age, King Karl X Gustav of Sweden led an army across the frozen Danish waters to lay siege to Copenhagen.

It was also at this time that the Viking settlements in Greenland gradually died out. The Medieval Warming Period is usually agreed to have lasted from approximately 900 to approximately 1300 AD and from then onwards the climate cooled again. Glaciers grew, sea ice advanced and marine life migrated southwards as it did so, leaving the Greenlanders with a smaller and more difficult catch. The summers became shorter and progressively cooler, limiting the time cattle could be kept outdoors and increasing the need for winter fodder which became less available. Trade between Greenland, Iceland and Europe became more difficult and finally ceased.  It can only be hoped that a few Greenlanders escaped to re-settled somewhere less cold before starvation overcame them all.

But since temperatures during the Medieval Warming Period were higher in Greenland than they are even today, and since this was followed by a Cooling Period, and since this has happened many times before (which have not been considered here), the fact that the earth may have warmed somewhat since the mid 1850s is not unusual. Nor will it be unusual if the temperatures now start to drop.

Above all, since man was not industrialised before the mid-1850s and so was not emitting any huge amounts of CO2, any warming which has occurred over the past 150 years (for which we should be grateful) is obviously a natural event and –not all our fault!