Fear of tropical cyclone eases, but not over for Oman, Pakistan and India. Read (here) 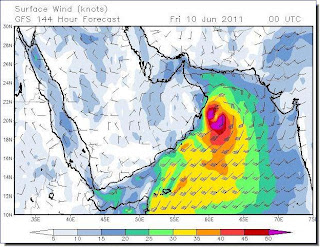 It started out as innocuous tropical storm named “Keila’ by the Maldives on June 6th, and was moving towards India’s Maharashtra-Gujarat coastal areas.

The latest surface pressure charts, satellite images and latest reports received from the Regional Centre for Monitoring Tropical Systems indicate the presence of a tropical low pressure system in the North East of the Arabian Sea near the western coasts of India centred at 19 N degrees latitude and 71.5 E degree longitude about 120 kilometres off the coasts of India

The wind shear is very low and the sea temperatures are above than normal. The system is near the Gujarat coast and is moving towards North western direction at 1 knots/ hour. The affects of storm Keila will be felt in the Sindh and Makran coast by June 10 night which could further intensify on June 11, 2011. In India Saurashtra too will have intermittent rainfall as Keila passes by. The winds at the Gujarat coast are likely to be very strong over the next one week

From India, it would likely head for Oman and hit the sultanate on Friday. as a super cyclone. Oman was hit by a powerful cyclone, “Gonu’” in June 2007 bringing unprecedented devastation in its wake. Another cyclone, “Phet”, with far less intensity, struck last year, also in the month of June.

Cyclone Keila will be the first tropical storm of 2011 North Indian Ocean cyclone season and the second tropical depression of this Ocean after depression BOB 01. Keila is a Maldives word, which is derived from Arabic word of Kayla, it is a female name. 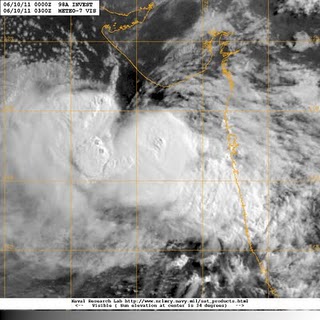 According to Vagaries of Weather

"AS-1 agian changes course, shifts NE ! But seems will brush the Saurashtra coast.

The JTWC ‘alert' gets upgraded to ‘cyclone warning' if all pieces fall into place for calibrated system intensification. Presently, it was more or less lying anchored in the region with little forward movement.

But India Meteorological Department (IMD) has from overnight on Thursday withdrawn the watch for intensification of the system as a depression.

A few global models still see its intensification as a depression/cyclone and initial movement towards south Gujarat-Mumbai region guided apparently by a westerly trough.

It is shown as surviving the westerly trough and once the westerly influence wanes, would ‘bounce back' off southwest Gujarat coast into the sea and drive away in a west-northwest direction caressing the southern Pakistan coast.

The US National Centres for Environmental Prediction and the Taiwanese Central Weather Bureau share this view while the Roundy-Albany model sticks to a track north-northeast across south Gujarat into northwest India.

Posted by Rajan Alexander at 9:19 AM