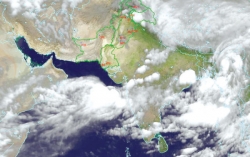 MUSCAT — The Directorate-General of Meteorology and Air Navigation (DGMAN) announced that the latest satellite images revealed that the tropical depression has turned into a deep low pressure system, the speed of surface winds around the epicentre is estimated at 28 nautical miles.

The low pressure system continues to move close to the west coast of India (at 17.5 degrees latitude and 70.5 degrees longitude) about 220 km off the Indian coast, and 1,200 km off Masirah coast.

The DGMAN said in a statement that the latest numerical weather predictions charts indicate that the low pressure system will continue moving parallel to the Indian coast in the next two days, with the probability that it might intensify. It said that there is also a chance for high and medium clouds over the Sultanate.

The DGMAN will continue to monitor the system and issue notifications should necessity arise.
According to readings that are hitherto available, there is no indication of direct impact on the Sultanate, the Met office added in its statement.

Meanwhile, the Pakistan Meteorological Department said a well-marked low-pressure area in Eastern Arabian Sea has intensified into a depression.

The current sea surface temperature is favourable for the development of this weather system into a Tropical Cyclone. The temperature and other meteorological parametres indicate that expected Tropical Cyclone may further intensify today or tomorrow that would move in north-westerly direction initially.

Based on probable track and estimated intensity of expected Tropical Cyclone, widespread thunderstorms with scattered heavy fall is expected along Pakistan coast from this evening.