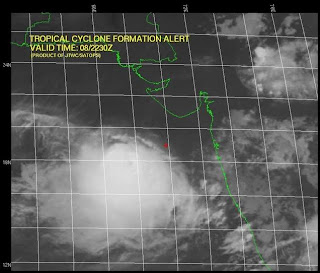 The US Navy’s Joint Typhoon Warning Centre (JTWC) has issued a cyclone formation alert in the Arabian Sea in line with its watch for further intensification of the weather system in east-central basin.

Identified as a well-marked low-pressure area by the India Meteorological Department overnight and scheduled for likely upgradation this morning, the system is currently in a ‘quasi-stationery’ mode, the JTWC said.

But it refrained from giving a forward track for movement of the system, which ranged from northwest towards the Gulf of Eden; north towards Karachi, Pakistan; and northeast towards southwest or south Gujarat, depending on projections put out by disparate models.

The arrival of a westerly trough from Pakistan towards the east has made the reading of the emerging scenario more difficult.

Available data does not justify the issuance of ‘numbered tropical cyclone’ warnings (the penultimate step before calling the storm by a name drawn from a list agreed on by World Meteorological Organisation) at this time, the JTWC said.

Winds in the area are estimated to 28 to 33 knots (52 km/hr to 61 km/hr). Satellite imagery traced out a circulation centre located approximately 180 nautical miles (333 km) west of Mumbai.

Water vapour imagery depicts good outflow to the west of the system, and equator-ward outflow too has increased slightly, indicating the strength of flows.

Upper level analysis places the system in a region of weak vertical wind shear (little variation in wind speed with height that kills storms) and favourable window effect at the top, which allows the storm to breathe.

Due to decreasing central pressures (that help strengthen the flows), persistent deep convection, and increasingly favourable environmental conditions, the JTWC upgraded to ‘high’ the potential for the development of a significant tropical cyclone in the basin within the next 24 hours.