US Supreme Court ruling: Climate science is not settled.

When Albert Einstein observed ”No amount of experimentation can ever prove me right; a single experiment can prove me wrong" he was simply reiterating the principle of falsifiability in science.

Falsifiability or refutability is the logical possibility that an assertion could be shown to be false by a particular observation or physical experiment. The concept was made popular by Karl Popper in his philosophical analysis of the scientific method. Popper argued that a hypothesis, proposition, or theory is "scientific" only if it is, among other things, falsifiable. Popper asserted that unfalsifiable statements are non-scientific, although not without relevance.

But this is exactly the principle the so called climate science contradicts when it claims that "the science is settled". Einstein, one of the world's greatest scientist, if not the greatest ever, also observed that "A man should look for what is, and not for what he thinks should be." Anthropogenic Global warming (AGW) precisely goes against this principle too when it concentrated exclusively on the human signal behind the phenomenon of climate change. The Inter-governmental Panel on Climate Change (IPCC) was in fact established not to study climate change in its entirety but to prove that the human signal is the most significant factor in climate change.

Two weeks ago, the US Supreme Court struck a blow against AGW by declaring that global warming is by no means a settled issue, they made clear, suggesting it would be foolhardy to assume it was. Lawrence Solomon, executive director of Energy Probe and author of The Deniers, in an article in the Financial Post, reports on this ruling. 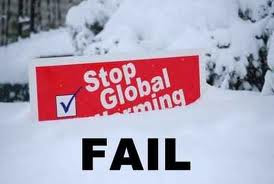 The justices of the United States Supreme Court this week became the world’s most august global warming sceptics. Not by virtue of their legal reasoning – the global warming case they decided turned on a technical legal issue — but in their surprising commentary. Global warming is by no means a settled issue, they made clear, suggesting it would be foolhardy to assume it was.

“The court, we caution, endorses no particular view of the complicated issues related to carbon-dioxide emissions and climate change,” reads the 8-0 decision, delivered by the court’s acclaimed liberal, Justice Ruth Bader Ginsburg.

The court decision noted that the Environmental Protection Agency itself had “Acknowledg[ed] that not all scientists agreed on the causes and consequences of the rise in global temperatures,” before suggesting readers consult “views opposing” the conventional wisdom. Specifically, the justices’ recommended reading was a superb profile of Princeton’s Freeman Dyson, perhaps America’s most respected scientist, written in the New York Times Magazine, March 29, 2009.

Dyson, an unabashed skeptic, believes that carbon dioxide, rather than being harmful, is both necessary and desirable, arguing that “increases in atmospheric carbon dioxide produce many beneficial effects upon the natural plant and animal environments of the Earth.”

Somewhat in the same vein, Justice Ginsburg notes carbon dioxide is necessary and ubiquitous, and thus shouldn’t be the target of indiscriminate attacks. “After all, we each emit carbon dioxide merely by breathing,” she notes, repeating a point that Dyson couldn’t have said better himself.

Posted by Rajan Alexander at 9:32 AM