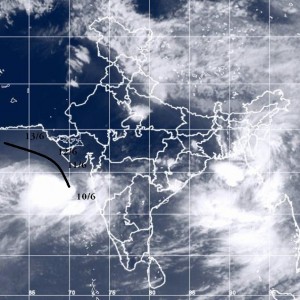 IMD infrared imagery of well-marked low over the Arabian Sea on June 9, 2011.

By the same token, the low-level cyclonic circulation has not only stayed off shore, it has held together and strengthened noticeably since early week.

Now, we have, from the Joint Typhoon Warning Center (JTWC) a Formation Alert that was issued about 18 hours ago.

The JTWC are not along, as the Indian Meteorology Department (IMD) have also advised that tropical cyclone formation is likely (within 48 hours).

I am still witnessing a sharp disagreement among the numerical forecast models. The latest run of the GFS shows a tropical cyclone, as GFS runs have consistently done for days. Admittedly, this model has been too fast in bringing this about (assuming a cyclone is in the making), and the path has shifted significantly. Meanwhile, the NOGAPS has given up on the idea of any Arabian Sea tropical cyclone, and its latest run hardly shows any low in its initial time step.


WHERE WOULD A TROPICAL CYCLONE GO?

I believe that we will end up with a declared tropical depression, or even cyclone, arising out of the present well-marked low. Where it would go is unclear to me. One possible scenario, as shown by multiple runs of the GFS, is for the low center to drift north to near the western Kathiawar coast (Gujarat, India), then hook towards the west and north at sea south of Pakistan. Answers will be forthcoming during the next days.

Posted by Rajan Alexander at 2:50 PM