Good Old Pachauri: Admits next IPCC report too will be heavily muddled in Conflict of Interest 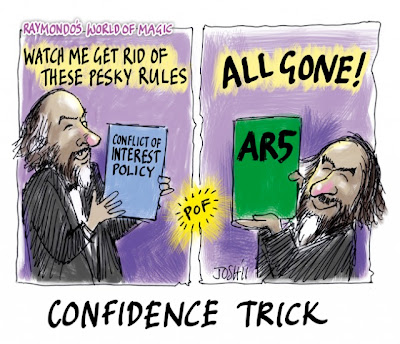 "Of course if you look at conflict of interest respect to authors who are there in the 5th Assessment Report we’ve already selected them and therefore it wouldn’t be fair to impose anything that sort of applies retrospectively."

Rajendra Pachauri is every climate sceptic’s dream. He proved it again in an interview to Oliver Morton of The Economist at an IPCC event in Brussels when he admitted that conflict of interest policies would not apply to AR5 authors. IPCC thereby sabotaged recommendations from the Inter-Academy Council and announced its plans to evade the conflict of interest policies passed at the 33rd IPCC plenary only a month ago. The event was the release of IPCC's latest report : Special Report on Renewable Energy which projected scenarios looking at the energy mix over the next four decades under various assumptions. Read the full article here

The penetration of renewables in Tamil Nadu is 30% and its effect was of transformation of the state from a net surplus energy producer to a net energy importer. This policy has plunged the state into massive power cuts and has shaved off  at least 2% of its GDP. And here is the latest IPCC report projecting  the highest penetration of renewables at 77% by 2050.  Imagine the plight of Tamil Nadu if penetration of renewables is 80%, most notably through a massive expansion of wind and solar power! So what is the empirical basis of this study? It was found that the report was a rehash of a campaign material of Greenpeace and the author itself a Greenpeace renewable energy campaigner. This revelation engulfed the IPCC in a new controversy. Read Christopher Booker's article: The IPCC declares Greenpeace in our time.

The US  Chairman of the Oversight Subcommittee on Science, Space, and Technology sent the IPCC a strong letter on their conflict of interest debacle and demanding the IPCC not be permitted to delay implementation of Conflict of Interest policy until after AR5. Here's extracts of the letter to letter to United Nations (UN) Secretary-General Ban Ki-Moon, calling for the adoption of a Conflict of Interest Policy for the UN Intergovernmental Panel on Climate Change (IPCC).

“Recent press reports have once again highlighted the need for the IPCC to address conflicts of interest” Broun wrote.

“If these press reports are true, it would seem as though one of the lead authors of Chapter 10 of the IPCC ‘Special Report on Renewable Energy Sources and Climate Change Mitigation’ was not only an employee of the advocacy group Greenpeace International, but also the co-author of one of the studies being reviewed in that Chapter.”