200 cold deaths in Europe; Temperatures to drop in India next week 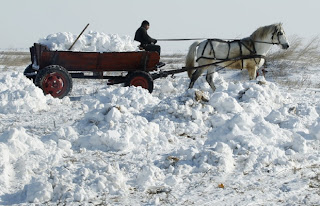 Temperatures have plunged to new lows in Europe where a week-long cold snap has now claimed more than 220 lives as forecasters warned that the big freeze would tighten its grip over the weekend. Read more here.

A Jet stream anomaly caused a deadly cold snap in Europe, described the worst in several decades has taken nearly 200 lives leaving thousands trapped.  Many of the dead from one of the harshest European winter in decades are homeless. Meanwhile, the same Jet stream anomaly caused temperatures further north near the Arctic Circle and the US to be much warmer than normal. Countries from Italy to Ukraine on one hand and on the other hand, upto to Greece and Turkey on the East struggled to cope with temperatures that reached record lows in some places.

UKRAINE: Tens of thousands of people have headed to shelters trying to escape the freeze that the emergencies ministry said has now killed nearly 100 people. Most of them literally froze to death on the street, with only a handful making it to hospital before succumbing to hypothermia, the ministry said. Shivering and hungry, tens of thousands of Ukrainians have sought help in the more than 2,000 temporary shelters set up by the authorities to help the poor survive the fearsome spell of cold weather.

ROMANIA:  Many people died overnight because of the cold, bringing the overall toll to 22, the health ministry said. Schools remained closed in some parts of the country as temperatures reached minus 31 degrees Celsius.

BULGARIA:  Mercury dipped to lows not seen in a century.

LATVIA: 10 people have died around the capital Riga alone, with no figures available for the rest of the country.

LITHUANIA: A 55-year-old homeless man found in the ruins of an abandoned house in the port city of Klaipeda became the ninth victim of the chill. 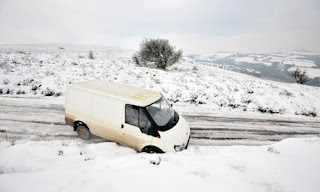 ITALY: hundreds of people were trapped overnight on trains as freezing temperatures and heavy snowfalls in the centre and north caused widespread disruptions on roads, railways and at airports.

SICILY: The cold has so far killed an infant in and a 76-year-old pensioner in Parma during what forecasters say is the coldest weather in Italy in 27 years.

AUSTRIA: An 83-year-old woman was found frozen to death in the woods after apparently slipping on her daily walk and not managing to get up again, becoming the country's second victim of the cold snap, officials said. In Serbia, the cold has killed six people and trapped some 11,500 others, mostly in remote mountain villages inaccessible by road.

SERBIA:  Homeless people unable to secure one of the 140 spots in the capital's sole shelter took refuge in trolley buses and trams.

FRANCE: Several regions have been placed under "deep cold" watch; authorities banned trucks on several major highways where the risk of snowfall and ice remained high.

UK: The Met Office has issued its most serious cold weather alert of the winter so far after overnight temperatures dropped to -9C in parts of the UK, with chilly conditions set to continue into the weekend and some snow forecast.

GREECE: Forget the usual images of Greece basking in hot sunshine reflecting on blue seas, and imagine snow-covered mountains and sub-zero temperatures. Greece is in the grip of arctic weather which has seen temperatures plummet well below zero. The ice on the ground and the snow covered orange trees glimmer in sunlight which belies the freezing condition

TURKEY:  Extreme winter conditions have brought life to a standstill across Turkey. The biggest freeze since 30 years has grounded 180 flights on Tuesday, and on Monday 200 flights were cancelled. The daily life of the European side of Istanbul was mainly paralyzed today and snowfalls are predicted to last until the weekend, with icy temperatures as low as Minus 27° Celsius in Southern Turkey. Meteorology officials have warned that snowfall and blizzards are likely to continue uninterrupted until February 7.

So why this cold burst in February?

In general, the La Niña causes radical Jetstream changes and you can click the arrow in the video to watch Accuweather’s explanation. Moreover, the Arctic Oscillation (AO) which was strongly positive till mid January overwhelmed the La Niña’s cooling effect by keeping the winds spinning fast in the Arctic, not allowing the cold southwards. But for last two weeks, the AO has flipped to its strongly negative mode as shown below which unleashed the arctic blast into Europe.

The cold jet stream dipped in Europe and Asia, but is still bottled up over North America. That's because another weather phenomena, called the North Atlantic Oscillation (NAO) is playing oddball by staying positive and keeping the cold away from the rest of North America. About 90 percent of the time, the North Atlantic and Arctic oscillations are in synch. But not this time, so much of the United States is escaping the winter's worst. But this can change soon. The NAO index looks as if it is going to soon flip strongly negative too. 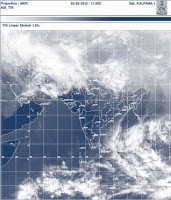 India’s North-West, is right now receiving an active western disturbance (WD) with rough weather implications for not just the higher reaches but also the plains. On Thursday, an India’s Met Office update confirmed the WD located the weather-making westerly system lying over north Pakistan and adjoining Afghanistan. The system would start affecting the western Himalayan region and adjoining plains from Friday onwards.  As it happened mid January, there is as simultaneous wave from exactly the opposite direction (easterly wave) moving across the seawaters of the Bay of Bengal aiming to hit south peninsular India from around the same time today.