Europe turns a full circle: The slogan 'Save the Arctic' gives way for "Save Us from the Arctic!" 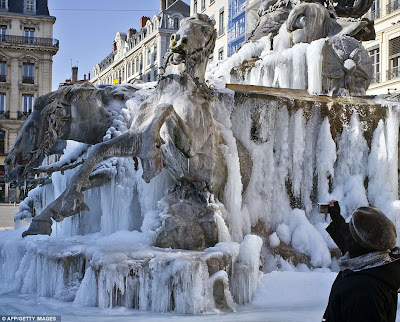 Don't go by a little warmth around, the chill is expected to return in a few days. The India Meteorological Department (IMD) has predicted colder day temperatures for the next three days over north-west India, including Delhi.

If you think this is cold, then think again. In Ukraine temperatures are near minus 40 deg C. Death toll in Europe's deep freeze has crossed 420.  From Save the Arctic Europeans are praying save us from the Arctic! 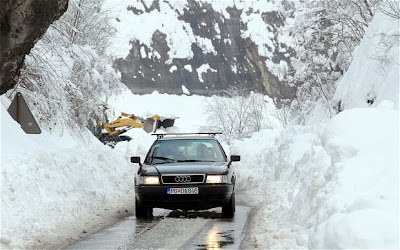 Belgrade - A cold wave sweeping across Europe has killed more than 420 people since late January, many of them homeless, and weather reports on Monday forecast more snow and frigid temperatures for the week.

The snow has thrown transportation out of gear, blocked arterial roads and cut off remote villages in many areas.

Four more people froze to death in Ukraine, which so far has the most victims in eastern Europe at 135. About 2,000 people were hospitalized for treatment from exposure to the -30 degrees Celsius temperatures.

In Poland, nine people have died since Sunday, bringing the death toll from late January to 61, the Interior Ministry said. Officials urged citizens to check heaters as some people have died of carbon monoxide poisoning.

Serbia's 10th victim froze to death in his unheated home in a village near Cuprija, 120 kilometres south-east of Belgrade, reported B92 online Monday, a day after the authorities declared a nationwide emergency situation because of the persistent snowfall and deep freeze.

The death toll in Croatia rose to five on Sunday night, when a man was found frozen in front of his home in Sibenik district. All the other victims were elderly people in remote areas. Heavy snowfall had made about 100 villages inaccessible.

Most buses from Zagreb to cities on the Adriatic coast scheduled for Monday were cancelled.  Czech authorities said three more homeless people froze to death in Prague, two men died in fires caused by their heaters and another was suffocated by carbon monoxide from a faulty heater.

In the Balkans, five additional people died in Romania since Sunday, the Health Ministry said in Bucharest. Most of the victims were either homeless or those who could not afford to pay for heating at home. Romania has so far reported 39 deaths.

After the blizzards, Bulgaria was hit by torrential rain and floods. At least five people drowned in the south, national radio reported, and the army sent rescue helicopters to the area.

Hungary's toll climbed to 12 at the weekend, the disaster protection agency said Monday according to the MTI news agency.

Many attempted to work their way through the deep freeze. Czech gravediggers had to use a jackhammer on the frozen soil to get ready for a funeral.

In the central Siberian city of Yekaterinburg, Indian circus elephants were being served spirits daily, with each receiving three bottles of vodka or three bottles of sweet wine mixed with water, said Natalia Kazantseva, a spokeswoman for the Limbo Limbo circus.

She said that members of a Tanzanian acrobat group received gifts of hand-knitted woollen socks and mittens. The cold spell has spread beyond the European mainland. At the weekend, children in Algiers saw their first snow and Palma de Mallorca recorded its lowest temperature since 1972, of -5.7 Celsius.

Posted by Rajan Alexander at 12:19 AM