If Al Gore and Rajendra Pachauri are the high priests of global warming religion, Mohammed Nashed was undoubtedly  its poster boy.

The ouster of Mohammed Nashed as the President of Maldives triggers ambivalent feelings in me.

In a way, the phenomena of Nashed come across as a whiff of fresh air in the governance history of Maldives. There is no getting away from the fact that he brought back democracy to Maldives. Nashed was jailed in all for six years after being arrested 27 times while agitating for democracy. He remains the country's first and only democratically elected President. He additionally preserved the country's culture of liberal brand of Islam.

But governing Maldives was not easy. Nasheed's predecessor, Maumoon Abdul Gayoom who ruled as a dictator for more than 30 years, may have been defeated at the polls, but his chosen people continue to control all other institutions of the country whether the judiciary, police; army etc who collectively continued to put hurdles to his governance. This task was made worse when a small section of Islamist fundamentalists made him the object of their ire because of his liberal outlook. He played right into their hands when he took to undemocratic steps to curb his opponents. The ouster of Nashed from this perspective remains a blot to democracy. But make no mistake. Nashed will be back in the chair of Presidency, maybe sooner than later.

Mohammed Nashed was built up by global warmists as the poster boy of the so called sea level rise threat posed by global warming to island states like Maldives and Tuvulu who emerged as a small but significal pressure bloc within the UNFCC climate treaty conferences. And Nashed was naturally, their leader and being as articulate as he is; he became their spokesman too with rock star billing. So his fall also evokes in me a sense of elation as a climate sceptic.

Being Oxford educated, Nashed was the West's darling. Before winning the presidency of Maldives, Nashed ran a human rights organization in the country, receiving liberal foreign funding.  If belonging to the NGO sector, you probably can't help but get carried away by listening to him because he speaks your language. But he misused this advantage to further the global warming scam. To be fair to Nashed, he did it all in the best interests of Maldives. The country has little economy but tourism. Nashed used the global warming scare to maximize its potential earnings. He was a marketer par excellence! 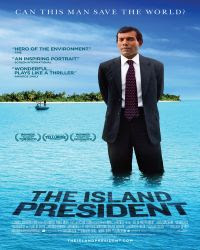 Immediately after taking office, Mohammed Nashed announced that he is setting up a sovereign wealth fund in order to purchase a new homeland for the inhabitants in the event of sea level rise caused by man-made ‘global warming’.

How will he financed this venture? He replied - this will come from a tax on the billions of dollars of tourism that the country enjoys – a ‘climate change levy’ that tourists will be glad to pay for, to atone for having contributed to ‘global warming’ by flying to get there. Here was Nashed masterly engaging in spin and guilt manipulation to get those succumbing to willingly part with their money!

The global warmist media chipped in to give him a helping hand, among which the BBC, the vanguard of the propaganda machine and guilt manipulation. These articles were penned as if they were retainers from the Maldives Tourism Promotion Board, providing free advertisements for Maldives Tourism. Here are some extracts from Nick Bryant, BBC correspondent in the Maldives, Maldives: Paradise soon to be lost:

"To visit the Maldives is to witness the slow death of a nation. For as well as being blessed with sun-kissed paradise islands and pale, white sands, this tourist haven is cursed with mounting evidence of an environmental catastrophe.

To the naked eye, the signs of climate change are almost imperceptible, but government scientists fear the sea level is rising up to 0.9cm a year. Since 80% of its 1,200 islands are no more than 1m above sea level, within 100 years the Maldives could become uninhabitable.

The country’s 360,000 citizens would be forced to evacuate. The Maldives’ survival as a sovereign nation is truly at stake…The Maldives can exert moral pressure and press its strong scientific case. But not much more. So come here fast, before it disappears. This is a paradise faced with extinction." 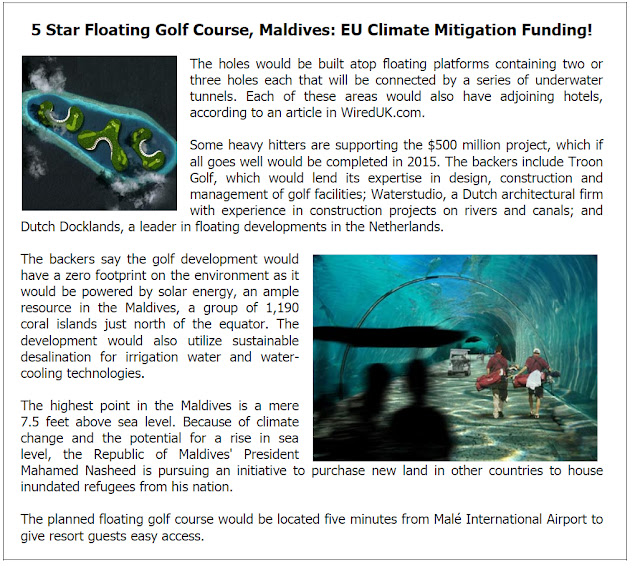 So how will Maldives be saved? After Nashed’s under-water cabinet meeting was derisively dismissed as a cheap stunt, there was apparently some re-think in strategy. No need for Nashed to repeat such stunts. Instead, cabinet meetings on the floating golf island could make great photo opportunities for the international media! Floating 18-hole golf course for the Maldives islands in the Indian Ocean is a $ 500 million project financed by EU's Climate Change programme funding!

So a so-called carbon neutral golfing destination. Of course, they aren't taking into consideration their travel into this equation but...