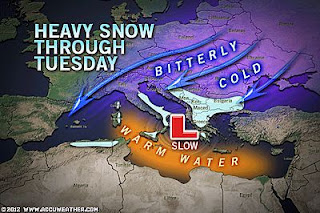 The latest in a series of major winter storms will dump heavy snow in areas from the Balkan Peninsula and Italy to North Africa early in the week.

Some of these same areas have already received deep, even immobilizing, accumulations of snow following last week's series of storms, which disrupted transportation infrastructure over a wide area.

Snow has contributed to the weather-related death toll, since late January, of at least 300 people, most of them dying of cold exposure.

About 70,000 people in Serbia were still cut off in snow-bound villages, according to many recent reports. Some mountain areas in Algeria also remained isolated.

Further disruptions to transportation by road, rail and air will take place.


Through Tuesday, heaviest new falls of snow will hit eastern and southern Italy to the mountains and inland valleys of Bulgaria, Serbia, Bosnia-Hercegovina, Macedonia, Kosovo and Montenegro.

By Wednesday, a fresh foot of snow will cover some of these regions.

Hills above the coast in eastern Algeria and nearby Tunisia will also get new falls of snow.

Although the Mediterranean storm will weaken markedly Wednesday and Thursday, a new storm could form over the northwestern Mediterranean Sea late in the week, leading to even more falls of disruptive snow.

Posted by Rajan Alexander at 2:04 AM