Will the Great River Rhine freeze over this month? 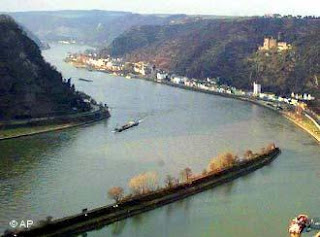 The Rhine is the longest river within Germany and is known for its beauty, with medieval castles and lovely wine villages along its banks. The river begins in Switzerland. Passing through the city of Basel, it forms the border between Germany and France, flows into Germany and the Netherlands and ends in the North Sea.

When rivers freeze, water turns dark, swirls thick; moves slow before hardening into ice. Though some rivers tend to freeze over easily, some do not. It all depends on the kinetic energy (KE) of the moving water. The higher its (KE), the more unlikely it freezes. The Rhine is one such river. 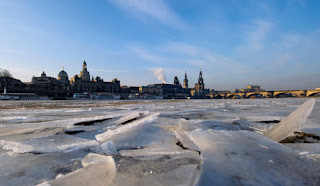 Instances of the Rhine freezing over is accordingly far and between but when it does, it could be dramatic. In the year AD 406, the Dark Ages began with a cold snap when the Rhine River froze over, allowing barbarians to cross the bridge of ice from ancient Germany into Roman territory. When they reached Rome, the barbarians looted and burned the city, wiping out centuries of learning and civilization. Edward Gibbon (1737-1794). In 1781, he wrote in chapter 30 of his famous Hstory of the Decline and Fall of the Roman Empire:

‘On the last day of the year, in a season when the waters of the Rhine were most probably frozen, they entered without opposition the defenceless provinces of Gaul.’

The worst flood ever registered occurred in February 1784. After an extremely long and cold winter the temperature jumped deep down. The Rhine river had frozen over and the thaw as well as the breaking open ice provided firmly for a record water level of 13,55 m. That was ten meters above the normal level! 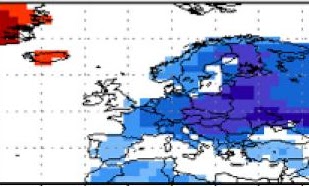 Now Piers Corbyn, Weather Action say that the possibility of the Rhine freezing in parts is high during this month as model forecasts all indicate an extremely cold Western Europe. Piers Corbyn observed:

"Our long range Euromaps regional detail and pressure scenario forecast shows the super-cold in Europe is very likely to continue which means the Rhine is likely to follow some other frozen-over rivers in Germany and freeze over in places. This last happened in 1962-63”

And if this happens, climate sceptics have another reason to click our champagne glasses

Posted by Rajan Alexander at 9:56 AM