This is an apology of an article of a warmist publication like Huffington Post. They can't come in terms to the fact that their support is dwindling. Skeptic weathermen like Coleman, Piers Corbyn or Joe Bastardi get 85% of the forecast rights.

This compared to warmists UK Met Office who get all the seasonal forecasts wrong, being forced to give up seasonal forecasting altogether. Climate is accumulated weather over time, minimum of at least 30 years. Now if warmists are unable to get the basic unit of climate right, why should we assume they get the cumulative climate  right. Not a single IPCC forecast has come right so far. 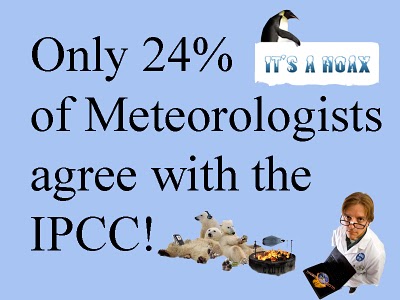 John Coleman, the founder of The Weather Channel and the original weatherman on Good Morning America: "There isn't any climate crisis," he said. "It's totally manufactured."

Meteorologists are notoriously reluctant to accept climate change. Why so? Theirs is a profession that studies the weather, which is akin to what climate scientists do by studying the weather over relatively long periods. Of course, they are not as educated as climate scientists who have PhD's in their field, while many meteorologists have college degrees unrelated to meteorology.

Meteorologists know the pitfalls of being wrong when making a forecast, however, they do not seem to realize that the conclusions of climate scientists are not the same as saying there is a 50% chance of precipitation tomorrow. The International Panel on Climate Change or IPCC put a probability that it is more than 90% likely that man is causing climate change. Do meteorologists, weathermen to use a more prosaic term, just feel inferior to climate scientists or just why are they so dismissive about climate change?

“Twenty-nine percent of the 121 meteorologists who replied agreed ...--not that global warming was unproven, or unlikely, but that it was a scam. Just 24 percent of them believed that humans were responsible for most of the change in climate over the past half century--half were sure this wasn't true, and another quarter were "neutral" on the issue." It is a scary statistic considering climate change may be the most important topic of our day.”

A more recent survey in 2012 showed that more than half of TV weather reporters don't believe in human-induced climate change, even as our agitated weather grows more extreme.

Weathermen communicate directly with the public in the intimacies of their living rooms each evening and therefore can greatly influence public perceptions about climate change. In a 2008 survey, it was learned that 66% of people trusted meteorologists most for their source of information about climate change. Climate scientists were considered more credible, but few people knew one or kept up with the latest scientific findings. Consequently, there is a battle going on for the hearts and minds of weather forecasters with far-right think tanks, like the Heartland Institute, vying for the souls of weathermen pitted against legitimate organizations like The National Science Foundation and the Congress-funded National Environmental Education Foundation.

As the only professional who speaks about science in an atmosphere of 30-second sound bites, weather forecasters are often asked to gauge an opinion on anything that may touch upon a scientific topic, although they may have scant knowledge of the field. These inquiries may give them the impression they are more omniscient in their science knowledge than they really are.


"There is one little problem with this: most weather forecasters are not really scientists. When a broad pool of weather forecasters were surveyed in a study barely half of them had a college degree in meteorology or another atmospheric science. Only 17 percent had received a graduate degree, effectively a prerequisite for an academic researcher in any scientific field."

"Among the certified meteorologists surveyed in 2008, 79 percent considered it appropriate to educate their communities about climate change. Few of them, however, had taken the steps necessary to fully educate themselves about it. When asked which source of information on climate change they most trusted, 22 percent named the American Meteorological Society (AMS). But the next most popular answer, with 16 percent, was "no one." The third was "myself."

Meteorologists almost uniformly base much of their skepticism of climate science on the use of models.

"Meteorologists know the inaccuracies of their own models," Brian Neudorff, a meteorologist at WROC in Rochester, said. "There's a lot of error and bias. We'll use five different models and come back with five different things. So when we hear that climatological models are saying this, how accurate are they?"

Besides the fact that models predicted such events as the climatic effects of the eruption of Mt. Pinatubo after being fed data on the eruption and other effects of climate change, what about the documented evidence that is gathered by scientists like the loss of polar ice or the melting of mountain glaciers, which many photographers have captured in time-lapse comparisons?

Apparently meteorologists not only have large gaps in their understanding of climate change science, but do not even realize the extent of these gaps. For example, they are seemingly unaware of the uniformity of the scientific consensus. In fact, scientists may be partly to blame for these misconceptions. "I don't see my job as convincing anyone of anything,"

Michael Mann, a climatologist and professor at Penn State University, said. So perhaps both sides share some of the blame - Meteorologists for not recognizing the limitations of their knowledge of climate science and the scientists themselves for not doing a better job of convincing the professionals best positioned to inform the listening public. One day perhaps even John Coleman, of The Weather Channel fame, can be convinced of the reality of warming.

Posted by Rajan Alexander at 2:00 PM