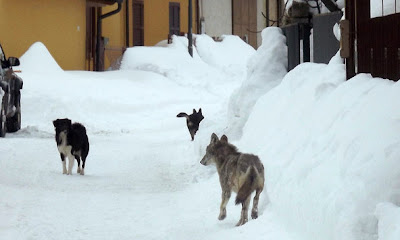 LONDON — Scavenging wolves have been sneaking into hilltop villages in central Italy, with one sighted uncomfortably close to the gates of an elementary school.

Their ominous appearance should not be taken as yet another metaphor for European decline. The lupine intruders, like their human counterparts, have simply been responding to the extreme cold that has swept the Continent in the past week.

The deep freeze caused widespread disruptions and even fatalities, as Rendezvous reported at the weekend. The effects of the cold have been compounded by shortages of natural gas, particularly from Russia, once again highlighting Europe’s dependence on energy from the east.

My colleague Andrew E. Kramer in Moscow explained the roots of the supply crunch last Friday, and noted:

“The transit of Russian natural gas across former Soviet states to customers in Western Europe is a pivotal economic and security concern for the Continent.”

One proposed route to greater European energy independence is tapping local natural gas supplies using the controversial technique known as hydraulic fracturing, which involves pumping vast quantities of water and chemicals into shale deposits in order to extract the gas trapped there.

Even in the United States, where “fracking” has transformed the energy landscape and the administration has welcomed the technology, projects have been held up by concerns about water supplies and chemical contamination. Opponents say that fracking damages the environment and scars the countryside.

In Europe, the introduction of fracking has received a mixed reception. France last year became the first country to outlaw the technology and set about revoking existing shale extraction permits.

President Nicholas Sarkozy said the ban would remain in place until there was proof that shale gas exploration would not harm the environment or “massacre” the French countryside.

In Poland, estimated to have the largest European reserves of shale gas, authorities have embraced a new technology that could free it from dependence on both dirty coal and Russian gas.

Proponents in Britain suffered a setback in public perceptions last year when an independent report revealed strong evidence that a series of minor earthquakes felt in the northern seafront resort of Blackpool were caused by fracking.

As the fracking debate heats up in Europe, environmentalists seeking a moratorium until more research is available have found an unlikely ally - Gazprom, the Russian energy giant.

The very company that figuratively brought the wolf to Europe’s door over the past week by trimming gas supplies has been warning about the consequences of fracking as an alternative to Russian natural gas.

As far back as two years ago, Alexander Medvedev, head of Gazprom exports, told a press conference in London:

“Not every housewife is aware of the environmental consequences of the use of shale gas. I don’t know who would take the risk of endangering drinking water reservoirs.”

In Bulgaria, which boasts that it has 100 years of shale gas reserves, Gazprom is accused of putting the squeeze on the authorities to bow to popular demands for a fracking moratorium last month that would perpetuate the country’s dependence on Russian supplies.

“It is obvious that Gazprom is serving the same role that the Soviet Army served some decades ago.”

Posted by Rajan Alexander at 8:07 PM