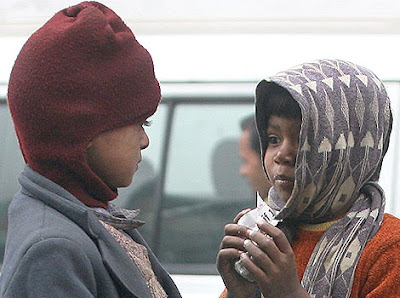 New Delhi: Rain and snow brought the chill back in many party of North India as the hill states of Himachal Pradesh and Uttarakhand witnessed heavy snowfall on Tuesday.

At four degrees, Delhi recorded the lowest temperature on this day of the month last 30 years.

A white blanket of snow covered Shimla and Manali intensifying the cold wave conditions in the hill state.

The minimum temperature in Shimla plummeted to -1.6 degrees Celsius as snowfall resumed in the hills after late afternoon. While Manali, Rohtang, Keylong, Kalpa and other high altitude areas experienced intermittent heavy snowfall, mid and lower hills were lashed by rains.

In Manali, school-goers and commuters had problems following slow vehicular movement even as tourists enjoyed the snowfall.

Shimla and Manali reeled under piercing cold wave conditions with minimum temperature plummeting to minus 1.6 deg C and minus 1.2 deg C, while Solan, Palampur and Bhuntarm recorded a low of 2.5 deg C, 3.5 deg C and 3.8 deg C.

The key tourist resorts of Kufri, Fagu and Narkanda in Shimla experienced 40 cm to 60 cm while Kumrsein and Rohroo had 25 cm and 10 cm of snow.

Heavy snowfall was also reported from the higher reaches of Garhwal and Kumaon. The minimum temperature dropped to 2 to 3 degree Celsius in tarai towns such as Dehradun, Haridwar, Roorkee, Haldwani and Udham Singh Nagar.

The local weather department has predicted more snow and rain in the next couple of days thus intensifying the cold wave.

Posted by Rajan Alexander at 12:10 PM