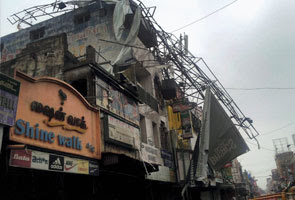 Chennai:  Relief operations were launched on war-footing to bring back normalcy in Cyclone Thane battered Tamil Nadu's Cuddalore district and the adjacent Puducherry, as the toll caused by the severe storm mounted to 42 today.

As the administrative machinery was put in top gear, Chief Minister Jayalalithaa said nine more people died in rain related incidents today. She said five people were killed in Cuddalore, the worst affected district, three in Kancheepuram and one in Theni. She also announced a compensation of Rs. two lakh each to those killed.

Thane, packed with wind speeds of about 135 kmph, left around 20,000 people homeless till Friday, particularly in Cuddalore and Union territory of Puducherry. Parts of Cuddalore district wore a battered look with hundreds of uprooted trees and electric posts strewn across roads. Essential items like milk became scarce while officials started supply of drinking water through 60 tankers.

Rural Industries Minister M C Sampath, overseeing relief operations, said normalcy would be restored in a couple of days in Cuddalore district. The cyclone also disrupted rail and air operations with services cancelled or rescheduled. Flights to international destinations including the middle-east and Malaysia from Chennai were cancelled following the inclement weather.

Southern Railway partially canceled and rescheduled most of the trains between Chennai and southern districts. However, rains continued in the coastal districts of the state and southern Andhra Pradesh till Friday evening.

Puduchery District Collector S B Deepak Kumar said that rescue operations were in full swing in the Union Territory. Uprooted trees were being removed from the roads.

Cuddalore was the most affected, with damaged roads rendering it difficult for rescue teams including those from National Disaster Response Force and fire and rescue services to reach the cyclone hit fishing hamlets.

Some 250 coastal villages inhabited by fishermen had been put on high alert and there was fear all night long. Several hundreds were evacuated and taken to the 49 relief shelters. Others have had to fend for themselves.

Jaya, a fisherman from Puducherry told NDTV, "I have not seen a cyclonic storm like this ever. At least the tsunami, we ran away and saved our life. This time we have not earned even 10 rupees in the last one week. No one has come to our help.''

Most fishermen have suffered financial losses due to the cyclone.

"Catamaran, boat, nets, engine, all have been either damaged or washed away. What are we going to do? They have not even offered us shelter in a school or some other building,'' said Shankar, another fisherman in Puducherry.

A comprehensive assessment of the damage done by Cyclone Thane will take some more time. The immediate danger of loss to life has passed. But a question mark hangs over the future for thousands of fishermen along the coast who have lost or had their catamarans and boats damaged.

Posted by Rajan Alexander at 6:49 PM