This is what we already know. Just as there is nothing Green about Greenpeace - they being astro-turfists, there is nothing peaceful either. of them The head of Greenpeace International was expelled from the Durban Climate meet. These are junkies with their hearts in the right place; their heads in the wrong place. Wonder why Naidoo has nothing to say about the evil Climate Smart Agriculture? 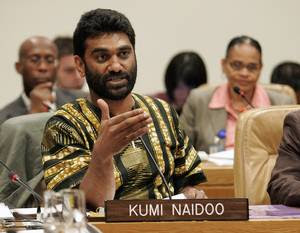 DURBAN: The head of Greenpeace, Kumi Naidoo, was expelled from UN climate negotiations today with around two dozen protestors who clamoured for a breakthrough as the troubled talks went into overtime.

The South African activist and anti-apartheid campaigner was escorted away after he led an occupation of the hallway outside the plenary room at the International Convention Centre, which has been declared UN territory for the talks. Naidoo, speaking to journalists before he was peacefully removed, said the talks were heading towards a "completely unacceptable" outcome.

"What we see here are baby steps. Baby steps is not what the situation calls for -- it calls for fundamental change."

He referred to a scientific report this week showing that, without a sharp cut in greenhouse-gas emissions, the planet is on track to warm by 3.5 degrees Celsius (6.3 degrees Fahrenheit) above pre-industrial levels, a recipe for worsening heatwaves, drought and floods.

"What is at stake here is not some nebulous thing called the planet. It is our childrens' and grandchildrens' future. That is what we are talking about," he said.

Blue-shirted UN security guards led all the protestors away in groups of two or three through a side door except a young man and a woman, both with NGO badges, who refused to move. After 15 minutes of negotations they were physically removed, the man carried arms and feet by two policeman, and the woman lifted into a wheelchair, an AFP journalist saw.

A security officer directing the policeman said that the protestors were not being arrested. The protest had started several hours earlier when the Maldives' environment minister, Mohamed Aslam, flanked by Naidoo, joined about a hundred green activists credentialed to attend the talks.

Posted by Rajan Alexander at 1:18 AM