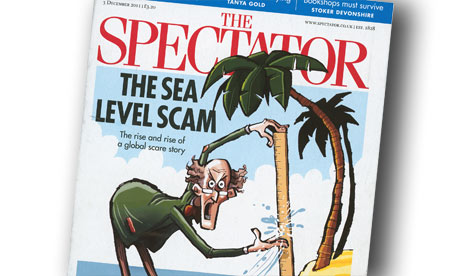 It has now become traditional for climate change summits to open with a new, dazzling prediction of impending catastrophe. The UN Climate Conference under way in the South African coastal town of Durban is no exception. This year’s focus is on a familiar and certainly arresting argument: that sea levels are rising at a catastrophic and unprecedented rate mainly due to manmade global warming.

No one makes this point with quite so much panache as Mohamed Nasheed, President of the Maldives. In the run-up to the summit, he declared that he leads ‘an island nation that may slip beneath the waves if all this talk on climate does not lead to action soon’.

Since chairing a meeting of his Cabinet underwater, Nasheed has been busy rallying other low-lying countries to make similar points. He chaired a summit of them in Bangladesh, to compare notes ahead of the Durban summit, and they agree to limit their own carbon emissions. Ban Ki-moon, the head of the United Nations, was delighted — saying that it was unfair to ask ‘the poorest and most vulnerable to bear the brunt of the impact of climate change alone’ and called for them to be given subsidies by richer countries to adapt. Such funds do not seem to be forthcoming. It seems the summit in Durban will, like so many climate summits, be disappointing.

I may be able to help. As someone with some expertise in the field, I can assure the low-lying countries that this is a false alarm. The sea is not rising precipitously. I have studied many of the low-lying regions in my 45-year career recording and interpreting sea level data. I have conducted six field trips to the Maldives; I have been to Bangladesh, whose environment minister was claiming that flooding due to climate change threatened to create in her country 20 million ‘ecological refugees’. I have carefully examined the data of ‘drowning’ Tuvalu. And I can report that, while such regions do have problems, they need not fear rising sea levels.

My latest project was a field expedition to India, to the coast of Goa, combining observations with archaeological information. Our findings are straightforward: there is no ongoing sea level rise. The sea level there has been stable for the last 50 years or so, after falling some 20cm in around 1960; it was well below the present level in the 18th century and some 50 to 60cm above the present in the 17th century. So it is clear that sea levels rise and fall entirely independently of so-called ‘climate change’. 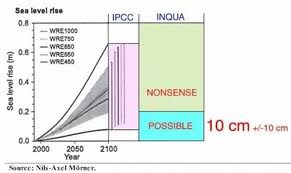 Explaining this to the public can be very hard. There are so many misconceptions about sea levels, not least that they are constant throughout the world. In fact, there are big variations — by as much as two metres. You need to think not of a constant, level surface, but of an agitated bath where the water is slopping back and forth. This is a dynamic process. In 900 ad, for example, the high level was in Tanzania and the low was in Peru; a century later this had reversed. It is also often forgotten that while sea levels may rise and fall (‘eustasy’), so too may the land mass itself (‘isostasy’).

Today, all people talk about is the sea level — because it coincides with the IPCC’s (Intergovernmental Panel on Climate Change) narrative about melting icesheets, diminishing glaciers and man-made globalwarming. This leads to confusion over cases such as Bangladesh, whose plight is the exact opposite of the one claimed by environmental lobbyists and the IPCC.

Two years ago, I visited the Sundarban delta area in Bangladesh and was able to observe clear evidence of coastal erosion, but no rise in sea level. In fact it has been stable there for 40 to 50 years. One way to tell this is by examining the mangrove trees, whose horizontal root systems now hang some 80cm above the mudflats as a result of erosion.

But the IPCC’s Fourth Assessment Report (2007) tells a different story about sea levels worldwide and is worth quoting in some detail: ‘Even under the most conservative scenario, sea level will be about 40cm higher than today by the end of 21st century and this is projected to increase the annual number of people flooded in coastal populations from 13 million to 94 million. Almost 60 per cent of this increase will occur in South Asia.’

This is nonsense. The world’s true experts on sea level are to be found at the INQUA (International Union for Quaternary Reseach) commission on Sea Level Changes and Coastal Evolution (of which I am a former president), not at the IPCC. Our research is what the climate lobby might call an ‘inconvenient truth’: it shows that sea levels have been oscillating close to the present level for the last three centuries. This is not due to melting glaciers: sea levels are affected by a great many factors, such as the speed at which the earth rotates. They rose in the order of 10 to 11cm between 1850 and 1940, stopped rising or maybe even fell a little until 1970, and have remained roughly flat ever since.

So any of the trouble attributed to ‘rising sea levels’ must instead be the result of other local factors and basic misinterpretation. In Bangladesh, for example, increased salinity in the rivers (which has affected drinking water) has in fact been caused by dams in the Ganges, which have decreased the outflow of fresh water.

Even more damaging has been the chopping down of mangrove trees to clear space for shrimp farms. In one area, 19 square miles of mangrove vegetation in 1988 had by 2005 decreased to barely half a square mile. Mangrove forests offer excellent protection against the damage of cyclones and storms, so inevitably their systematic destruction has drastically increased local vulnerability to these problems.

At Tuvalu in the Pacific, I found no evidence of flooding — despite claims in Al Gore’s An Inconvenient Truth that it was one of those ‘low-lying Pacific nations’ whose residents have had to ‘evacuate their homes because of rising seas’. In fact the tide gauge of the past 25 years clearly shows there has been no rise.

But the best-known ‘victim’ of rising sea levels is, without doubt, the Maldives. If the president believes the Maldives are sinking, why has he authorised the building of so many waterside hotels?

This myth has been boosted by the opportunism of Mohamed Nasheed, who stars in a new documentary called The Island President. The film’s tagline is ‘To save his country, he has to save our planet’. It is a depressing example of how Hollywood-style melodrama has corrupted climate science. Nasheed has been rehearsing his lines since being elected in 2009. ‘We are drowning, our nation will disappear, we have to relocate the people,’ he repeatedly claims. If this is what President Nasheed believes, it seems strange that he has authorised the building of many large waterside hotels and 11 new airports. Or could it perhaps be that he wants to take a cut of the $30 billion fund agreed at an accord in Copenhagen for the poorest nations hit by ‘global warming’? Within two weeks of Copenhagen, the Maldives foreign minister Ahmed Shaheed wrote to the US secretary of state Hillary Clinton to express support for the accord.

The IPCC’s Fourth Assessment claimed that ‘there is strong evidence’ of sea level rising over the last few decades. It goes as far as to claim: ‘Satellite observations available since the early 1990s provide more accurate sea level data with nearly global coverage. This decade-long satellite altimetry data set shows that since 1993, sea level has been rising at a rate of around 3mm yr–1, significantly higher than the average during the previous half century. Coastal tide gauge measurements confirm this observation, and indicate that similar rates have occurred in some earlier decades.’

Almost every word of this is untrue. Satellite altimetry is a wonderful and vital new technique that offers the reconstruction of sea level changes all over the ocean surface. But it has been hijacked and distorted by the IPCC for political ends.

In 2003 the satellite altimetry record was mysteriously tilted upwards to imply a sudden sea level rise rate of 2.3mm per year. When I criticised this dishonest adjustment at a global warming conference in Moscow, a British member of the IPCC delegation admitted in public the reason for this new calibration: ‘We had to do so, otherwise there would be no trend.’

This is a scandal that should be called Sealevelgate. As with the Hockey Stick, there is little real-world data to support the upward tilt. It seems that the 2.3mm rise rate has been based on just one tide gauge in Hong Kong (whose record is contradicted by four other nearby tide gauges). Why does it show such a rise? Because like many of the 159 tide gauge stations used by the National Oceanic and Atmospheric Administration, it is sited on an unstable harbour construction or landing pier prone to uplift or subsidence. When you exclude these unreliable stations, the 68 remaining ones give a present rate of sea level rise in the order of 1mm a year.

If the ice caps are melting, it is at such a small rate globally that we can hardly see its effects on sea level. I certainly have not been able to find any evidence for it. The sea level rise today is at most 0.7mm a year — though, probably, much smaller.

We must learn to take the environmentalists’ predictions with a huge pinch of salt. In 2005, the United Nations Environment Programme predicted that climate change would create 50 million climate refugees by 2010. That was last year: where are those refugees? And where are those sea level rises? The true facts are found by observing and measuring nature itself, not in the IPCC’s computer-generated projections. There are many urgent natural problems to consider on Planet Earth — tsunamis, earthquakes, volcanic eruptions not least among them. But the threat of rising sea levels is an artificial crisis.

Nils-Axel Mörner was head of paleogeophysics and geodynamics at Stockholm University (1991-2005), president of the INQUA Commission on Sea Level Changes and Coastal Evolution (1999-2003), leader of the Maldives sea level project (2000-11), chairman of the INTAS project on geomagnetism and climate (1997-2003).

Posted by Rajan Alexander at 10:53 AM