Why this year, I’m not dreaming of a White Christmas:Cold Wave already claims 26 deaths in India 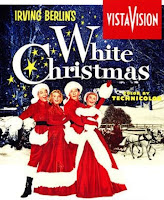 This had to be one of the most recognizable song lyrics out there during every Christmas season. I first got to know of “White Christmas” many, many years ago while growing up as a small boy in the streets of Singapore. Like many in the tropics,   I had absolutely no idea what a "White Christmas" was then, and even thought vaguely  it referred to Santa Claus white beard, but it did not stop me from singing that song made famous the world over by the crooning of the legendary Bing Crosby.


"White Christmas" was actually written in 1940 by an Irving Berlin for the 1942 movie "Holiday Inn" starring Bing Crosby and Fred Astaire. Berlin was in fact a Jew who found writing a song about Christmas most challenging, not belonging to the Christian faith. He drew upon his experiences of his childhood holidays in New York and Los Angeles, including Christmas Trees erected by neighbors when he was a boy. Little did Berlin know that the song will become an old time favorite, even after 60 long years. 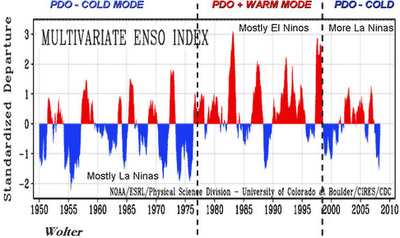 Songs often reflect the times. As seen from the graph, the period 1915-45 was a period the globe experienced warming at a scale matching those seen during 1977-2000. In fact the warmest year for USA remains 1934 and then only 1998 according to NASA data. A snow covered Christmas Day was a rarity then and Berlin captured within its lyrics the nostalgia when snow was more common, perhaps explaining the sheer magnetism the song holds.  The planet undergoes a warm-cool oscillation on an average, every 25-30 years, correlating with a climatic phenomenon called Pacific Decadal Oscillation (PDO) as seen in the graph. Living almost in a quarter of a century within the same cycle will tend to prompt almost anybody to forget what it meant living in an opposite cycle. As was the case of Berlin in the 40s, it was also the same at turn of the millennium, wherein almost two decades of warming made most forget that a global cooling mode is next to come as part of earth’s natural climatic variability.  An article in the UK’s Independent newspaper with a dateline 20 March 2000 best illustrated this popular fallacy when it predicted snow will become extinct:

According to Dr David Viner, a senior research scientist at the climatic research unit (CRU) of the University of East Anglia, within a few years winter snowfall will become "a very rare and exciting event. Children just aren't going to know what snow is”

Dr David Viner was of course a global warmist scientist belonging to UK’s premier climatic centre; the very same institution who predicted that that end of this millennium will see the planet warm 4 degrees Celsius if greenhouse gases are left unchecked. It is based on their prediction that each year delegates from 190 countries gather to negotiate a treaty to cutting emissions to save the world from such a catastrophic temperature rise, as it took place in Cancun a few weeks ago.

How wrong the Independent is illustrated by the fact that 2011-2012 would be the fourth consequent harsh winter. If this trend continues for multiple years, this is how Little Ice Ages start, a long sequence of wild wet winters.What's more the IPCC in their new report admitted "a clear climate change signal would not be evident for decades because of natural weather variability." In simple IPCC speak, this means global warming is taking a vacation for the next 25-30 years and what we would henceforth be experiencing is a cycle of global cooling just as the multi-variate ENSO graph above illustrates. 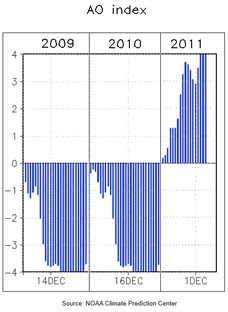 Last year the snow arrived at the end of November to Northern Hemisphere and a White Christmas was experienced extensively. We may or may not see extensive White Christmases as we saw last year. Though this year like last year the La Niña that brings cold weather is in play, the major difference is the Arctic Oscillation (AO) as illustrated in the above graph.

The Arctic Oscillation is the king of teleconnection indices. A negative AO indicates that the upper air pattern at the poles is blocked and consequently consists of higher surface pressures at higher latitudes and lower pressures in the middle latitudes. The AO for the last several weeks has been positive and is largely responsible for a mild winter start. But the arctic oscillation can change pretty quick. The AO is now only weakly positive and expected to switch to negative by the month end or early January. And when it does, we can expect very harsh wintry conditions during January-February next year.

Climate mitigation is all about helping us adapt to climate change. But even as the climate has changed, the damage of these lunatic "mitigation" programmes have caused hang like an albatross around our necks. 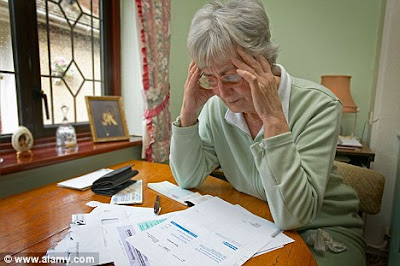 In the UK, Phillip Johnson at the Telegraph explains that

"the cost of gas and electricity has become jaw-droppingly expensive. For millions of people on low or declining incomes, especially the elderly, heating makes up an excessively large chunk of their outgoings."

One in four households will struggle to keep warm this winter because of costlier gas and electricity and the impact of green taxes, figures out today show. More than five million households in England alone are living in fuel poverty as incomes stagnate and energy bills soar. It is feared many may have to choose between food and energy in a 'heat or eat' dilemma. Fuel poverty is where a family spends more than 10 per cent of its income on energy. 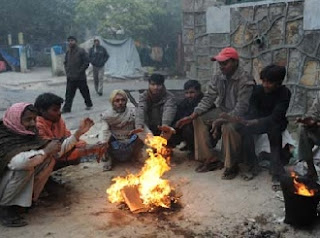 In India, it is much worse because it hosts a huge population of homeless.  The capital Delhi, itself have an estimated 100,000 homeless. In North India, temperatures are running 5 to 6 deg Centigrade below normal.  Water supplies have frozen in Jammu & Kashmir, Himachal Pradesh and other Northern states. Last week the country's Supreme Court ordered states to provide adequate night shelters for the homeless during the winter.

"You should not allow even a single person to die this winter from the freezing cold," the Supreme Court said.

Most deaths take place among the homeless and elderly. Despite this warning, at the time of writing, the official death count is 26 and rising. Most of these deaths have been reported from Uttar Pradesh.

While the middle and affluent classes may wish cold and even snow to kick in, the homeless pray that another cold wave like the one in 2002, which claimed more than 3,000 lives lost in Delhi alone.This is one of the reasons why I am not dreaming of a White Christmas this year.It is better for all of us that winter stays mild as long as it could.