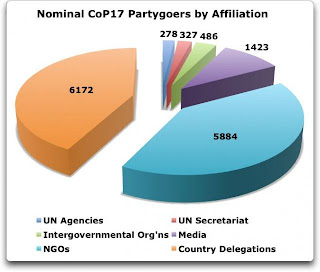 But their nine infiltrations still come a poor second to  top carbon profiteer, WWF  with their 14 delegates. We can understand Belgium, but why should taxpayers of poor countries like Bolivia and Bangladesh pay Oxfam staff's first class airfares, five star hotel and other perquisites?

As the graph illustrates, NGOs out-crowded by a mile, all other sections of party goers to the Durban Climate Summit. These NGO activists who are neither representatives of the people nor climatologists are masquerading as both at Durban. The official data on the party goers is available as Part 1, Part 2, and Part 3 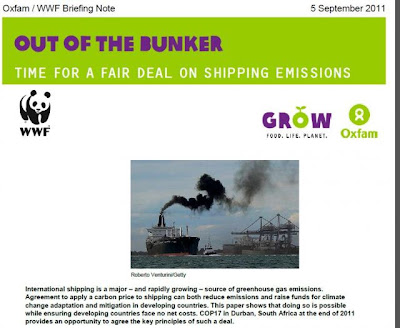 Antonio Hill, an Oxfam consultant is listed under the Bolivian delegation and successfully used the Oxfam-WWF briefing paper - to be officially adopted by Bolivia which proposes high taxation of global aviation and shipping sectors. NGOs are clamouring for the establishment of of a Climate Green Fund. Financing of the proposed fund became highly problematic with Republicans blocking

President Obama's Cap & Trade Bill and the collapse of the Chicago Carbon Exchange last year. Taxation of aviation and shipping sectors is designed to by-pass this impasse as it seeks to finance the Climate Green Fund through an alternate route. For the first time, the 194-nation UN Framework Convention on Climate Change (UNFCCC) has put a draft proposal on the negotiating table that identifies maritime transport as a potential source of revenue.


"A single ship can emit as much carbon dioxide in one year as several small island states," said Tim Gore, of Oxfam, which has help push the idea of a so-called "bunker fuel tax".

Oxfam calculates that the levy, based on a carbon price of 25 dollars a tonne, would -- besides cutting greenhouse gases -- generate some 25 billion dollars a year by 2020. A World Bank study released in September estimated that a carbon levy on both the shipping and aviation sectors could raise up to 250 billion dollars annually in 2020, and result in an emissions reduction of five to 10 percent. It looks now that Oxfam may not succeed with its diabolic agenda at the UNFCCC meet at Durban with prospects of a new global climate treaty washed away.

The major beneficiaries of the proposed Climate Green Fund are the NGOs themselves with WWF and Oxfam positioning themselves to grab a huge chunk of the fund's resources.  We can expect NGO staff and consultants with strong links with WWF and Oxfam to grab all the top positions at the Fund - positions  that comes with hefty tax free salaries comparable to multi-lateral agencies such as the World Bank and the United Nations.

While taxation of the aviation sector will make it difficult for ordinary global citizens to fly, such a fund will ensure that WWF's and Oxfam's top executives and board members continue to fly business class unfetered. The taxation of of the shipping sector will give a fillip to inflationary pressures of food commodities which should be bad news for global poverty and hunger.

Oxfam has also been a high profile player in promoting Climate Smart Agriculture through its reports 'Growing Better Future’  and 'Overcoming the Barriers: How to ensure future food production under climate change in Southern Africa'. In context to the former report where this blog made a detailed critique we exposed Oxfam attempting to pass off propaganda as research. Oxfam's CEO, Barbara Stoking claimed for example "The food system is pretty well bust', contradicting observational data for the last 100 years.

Crop yield growth rates might be plateauing as the limits to a finite biological system will eventually be reached. But that is very different from equating it as going bust. Yield levels are still higher by at least a factor of 7 from the launch of the Green Revolution. India is poised for a second consequent record breaking harvest this year is a validation of this point. This untruth from Stoking as CEO gives us an insight of the degree of intellectual corruption that pervade NGOs like Oxfam.

Credibility lies at the heart of any successful advocacy research. However, NGOs in their zest for results often forget this golden rule of the need to pursue truth. We need to start with a question, rely on intellectually sound techniques and methods to answer it, and report the answer, whatever it may be, as uncomfortable as it maybe. The question and even the kinds of evidence brought to bear may be shaped by values. After all, there is no such thing as value-free social science. But in “truthful” research, the answers are what they are, regardless of the researcher's personal point of view.

By contrast, “propaganda” starts with an answer and research is geared to not  find out how things work but to prove a predetermined conclusion. For example, Oxfam makes the remarkable case "Climate change poses a grave threat to food production. First, it will apply a further brake on yield growth. Estimates suggest that rice yields may decline by 10 percent for each 1°C (1.8 °F) rise in dry-growing-season minimum temperatures"  Remarkable as the study is based on a measly 100 sq metres experimental plot maintained by the International Rice Research Institute (IRRI) in the Philippines. If Tmin reduces yields, how does Oxfam all time record rice harvest in India, two years in a row? Last year, Andhra farmers dumped their rice into the Krishna River to protest low prices due to the rice glut in India and they are expected to do so again this year!

It is unfortunate that NGO staff or consultants are prepared to  mortgage their intellectual integrity to pen the propaganda piece that Oxfam reports have reduced themselves to. As researchers we are, after all, not primarily in the business of politics. We're in the business of truth.

There is a price to pay for intellectual corruption and Oxfam will soon find out for itself.  Climate Smart Agriculture may find itself in the final text of the Durban Climate meet but luckily for us will nor be legally binding.  But the Common Market for Eastern and Southern Africa (COMESA), the East African Community (EAC) and the Southern African Development Community (SADC) last  Monday launched the Tripartite Climate Change Programme intended to up-scale Climate Smart Agriculture in the region.

The programme, to be financed by the Norwegian government, the European Union and the United Kingdom Department for International Development, will have a special focus on supporting smallholder farmers, was launched on the sideline of the current UN Climate Change Conference, ongoing in the South African port city of Durban. So we have a ready baseline - agriculture production; crop productivity and food price index for the region and in the next few years we can track progress of the havoc NGOs like Oxfam have inflicted on poor countries by accentuating hunger.

Climate Smart Agriculture as we elaborated in our archive would not only accentuate global poverty and hunger but the whole paradigm of adapting to global temperature increases when it is actually declining is what could irrevocably damage Oxfam's institutional credibility. It's incomprehensible that Oxfam, a UK charity doesn't take the warning of the accelerating cold winters in their own country. On average, Britain’s winter climate is mild and has been so for many decades, probably since the end of the “Little Ice Age” in the 1800s. Last December, some called it the snowiest winter in 25 years and the coldest in over 100 years. This winter would be the fourth in a row with unusual cold and snow for at least a part of the winter.

NASA warns that sunspots could completely disappear by 2015 and if solar activity does not pick up, we are poised to a return to the “Little Ice Age”. The UK Met Office in a published paper in popular scientific journal, Nature to this effect admitted.

What could be much worse, if the Katla volcano in Iceland erupts which the BBC say is imminent, we may even face the prospect of nuclear winter. in the near term. Katla could spew an ash cloud dwarfing the 2010 eruption that cost airlines two billion dollars (£1.27 billion) as it is a much bigger beast than the nearby Eyjafjallajokul volcano, which blasted ash all over Europe for several weeks. Its last major eruption in 1918 continued more than a month, turning day into night, starving crops of sunlight and killing off some livestock.

During the height of the Little Ice Age generally, it was about 1 degree Celsius colder than at present. The Baltic Sea froze over, as did most of the rivers in Europe. Winters were bitterly cold and prolonged, reducing the growing season by several weeks. These conditions led to widespread crop failure, famine, and in some regions population decline.

Within this scenario, playing around with global agriculture in a camouflaged attempt to wrest control of global food supply that could ramp up the  political hegemony of western countries over rest of the world is really counter productive for interest of western economies themselves. In a Little Ice Age, it would be only the countries of the Tropics who could be able to feed the world.

Posted by Rajan Alexander at 4:35 PM