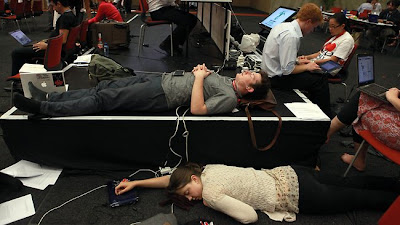 DURBAN, South Africa--(ENEWSPF)--December 13 - The UN climate talks in Durban were a failure and take the world a significant step back by further undermining an already flawed, inadequate multilateral system that is supposed to address the climate crisis, according to Friends of the Earth International.

Developed countries engaged in a smoke and mirrors trick of delivering rhetoric but no action, failed to commit to urgently needed deep emissions cuts, and even backtracked on past commitments to address the climate crisis, said Friends of the Earth International.

The outcome of the Durban talks, heralded by some as a step forward, in fact amounts to:

While there was resistance from developing countries to the destructive proposals on the table in Durban, the final Durban outcome amounts to:

3. Drastically insufficient targets for cutting greenhouse gas emissions. Taken alongside the expansive loopholes agreed to in Durban that serve to help countries avoid emissions cuts, these paltry pledges actually mean a likely net increase in emissions between now and 2020.

4.  A shift of the burden for climate action to developing countries, which have done the least to cause global warming, have the least resources to combat it, and face the additional burden of having to address pressing poverty alleviation and development needs.

5. Absolutely no progress on urgently-needed, new and additional public financefor developing country climate action and adaptation measures to protect vulnerable communities from climate impacts.  The Green Climate Fund was approved but with no means by which to fill the coffers and a provision agreed to that could allow multinational corporations and private financial actors to directly access the fund.

6.  The increased likelihood of new opportunities for carbon trading,a destructive false solution to the climate crisis which locks in climate inaction, drives land grabbing and displacement of communities, and could contribute to another global financial collapse.

“Developed countries, led by the United States, accelerated the demolition of the world’s international framework for fair and urgent climate action.  And developing countries have been bullied and forced into accepting an agreement that could be a suicide pill for the world,” said Nnimmo Bassey, Chair of Friends of the Earth International.

“On the eve of the climate talks, hundreds of families in Durban lost their homes and some even their lives in devastating flooding.  From the Horn of Africa to Thailand to Venezuela to the small island state of Tuvalu, hundreds of millions of people are bearing the brunt of the climate crisis they did not create.  The lack of progress in Durban means that we are even closer to a future  catastrophic 4 to 6 degrees Celsius of warming, which would condemn most of Africa and the small island states to climate catastrophe and devastate the lives and livelihoods of many millions more around the world” he continued.

The disastrous Durban outcome is attributable to a combined effort by the governments of rich industrialised countries, most notably the US, Canada, Japan, New Zealand, Australia, Russia and the European Union.   The United States is most to blame, as it has been the most powerful driver in the dismantling of the legally-binding framework for developed country emissions reductions.  It refused to take on emissions reduction commitments under the Kyoto Protocol, and has attempted to replace this system with a weaker, ineffective system of voluntary pledges. Canada, Japan, New Zealand, Russia, Australia and New Zealand have pursued a similar agenda of trying to escape their legal and moral obligation to act first and fastest to cut their emissions.  Canada, Japan and the Russia have refused outright to emissions cuts under the Kyoto Protocol second commitment period, and Australia and New Zealand have made their commitments conditional, leaving the European Union and a handful of other developed countries covered by the agreement in Durban. The European Union, heralded as a climate leader and the saviour of the Durban talks, had an  agenda filled with false promises.  The EU was a key architect of the new “Durban Platform” that will delay action for ten years, lock in low ambition and deliver a weaker, less effective system than the Kyoto Protocol. The EU’s strategy in Durban was to split the group of developing countries and force emerging economies like India and China, with hundreds of millions of people still below the poverty line, to take on unfair responsibilities for tackling the climate crisis. The EU also blocked progress in closing dangerous loopholes in existing emissions targets, and was the principle driver of the push to expand destructive carbon trading. The huge influence of corporate polluters and other corporate and financial vested interests over the positions of governments is the underlying reason why Durban’s outcome was so disastrous.  The pressure and influence of these interest groups undermines the ability of ordinary citizens and civil society to hold our governments to account for their action on climate and their positions in the international climate negotiations.

“Developed country governments have connived to weaken the rules that require their countries to act on climate whilst strengthening the rules that allow their corporations to profit from the crisis” said Bobby Peek of groundWork / Friends of the Earth South Africa.

“After bailing out the banks, rich countries at the climate talks refused to commit a single new dollar for climate finance for developing countries.  They  insisted on allowing multinational corporations and global financial elites to directly access the Green Climate Fund, and pushed through the opening up of further possibilities for speculation via the dangerous  carbon market bubble.  It is clear in whose interests this deal has been advanced, and it isn’t the 99% of people around the world,” he continued.

Many developing country negotiators expressed growing concerns as the talks progressed. The Africa Group (comprising the 54 countries in Africa), India, Venezuela, Bolivia, the Philippines, Thailand, Malaysia, Nicaragua and a number of small island states all pushed back against the destructive proposals being advanced.  But developing countries were coerced into having to accept a “take it or leave it” package to save the Kyoto Protocol and the Green Climate Fund and failed to stand strong and united against the disastrous final outcome of the talks. One of the most vocal critics, India, caved at the last minute to demands by the US and other developed countries that provisions to safeguard an equitable approach to tackling the climate crisis be excluded from the Durban agreement.

“Ordinary people have once again been let down by governments.  Behind the failure in Durban lies the huge influence of corporate polluters and the disproportionate power of the rich developed world.  The noise of the vested interests has drowned out the voices of ordinary people in the ears of our leaders“, said Sarah-Jayne Clifton, Climate Justice Coordinator at Friends of the Earth International

“It is clear that right now our governments cannot do the job we need them to do.  But outside the negotiating halls, in our universities, our workplaces, and on the streets, vibrant movements are coming together to build a fair and better world. It is in this growing movement – of workers, women, farmers, students, Indigenous Peoples, and others affected by this greedy economic system – where we can find hope of solutions to the climate crisis” she continued.


WHERE NOW FOR CLIMATE JUSTICE?


Friends of the Earth International believes that we need to radically transform our global economy to create a more just and sustainable world. We need dramatic cuts in emissions on the basis of science and equity and a transformation in our economies to make this a reality.  Developed countries also have a moral and legal obligation to honour their climate debt and provide adequate public finance to developing countries to develop sustainably and protect the vulnerable from climate impacts.  A strong and fair UN agreement on climate is essential, and to get it we will work with others to strengthen the movement for justice in all countries and hold our governments to account to ensure that politics works for people and the planet, not for profit. Friends of the Earth are the U.S. voice of the world's largest grassroots environmental network, with member groups in 77 countries. Since 1969, Friends of the Earth has fought to create a healthier, just world.

Posted by Rajan Alexander at 10:44 PM