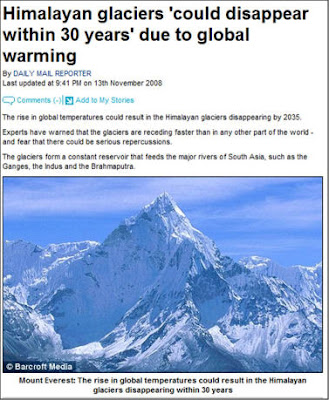 The mountain ranges that straddle Bhutan, Nepal, China, India, Pakistan, Afghanistan, Kazakhstan, Uzbekistan, Kyrgyzstan and Tajikistan are collectively called the High Mountains. After the Arctic and the Antarctic, the region that has Earth's largest store of ice, in more than 46,000 glaciers and vast expanses of permafrost was the High Asia Mountains. For this reason it was also called the Third Pole.  The rivers Ganges, Brahmaputra, Indus, Amu Darya and Syr Darya originate from the High Mountains that include the Himalayas, Karkoram, Hindu Kush, Pamir and Tien Shan ranges.

Based on a claim in the 2007 report of the Intergovernmental Panel on Climate Change (IPCC) that Himalayan glaciers could disappear by 2035 (see Nature 463, 276-277; 2010),  NGOs and environmentalists ran a campaign to the run up to the Copenhagen Climate meet.

They suggested the Third Pole is Asia's Water Tower because its glaciers feed the continent's largest rivers that sustain 1.5 billion people across ten countries is now in danger because it is melting fast and filling lakes that can overflow and flood valleys. The result is earth shattering scale of climate refugees, droughts and crop failures!  The IPCC claim was exposed as an error and the IPCC was forced to retract the claim.  Snippets of what leading NGOs and environmentalists then claimed could be found in the box below: 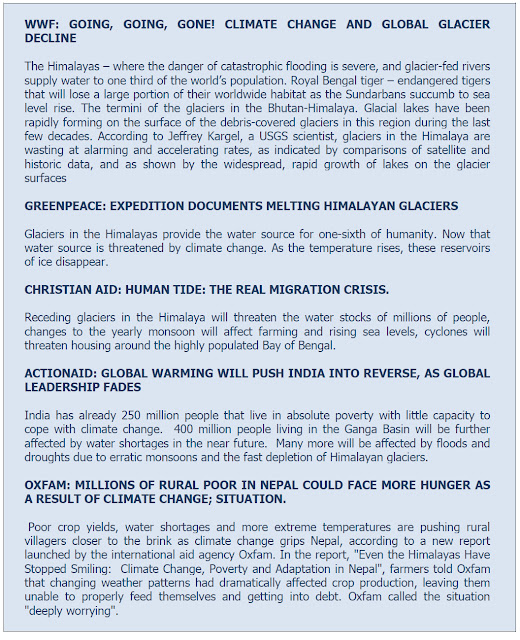 A University of Colorado Boulder team partnered with the United States Agency for International Development (USAID) to assess snow and glacier contributions to water resources originating in the high mountains of Asia that straddle 10 countries.   The researchers used remote-sensing satellite data from NASA, the European Space Agency and the Japanese Space Agency to develop time-series maps of seasonal snowfall amounts and recent changes in glacier extent. They also used local meteorological and river discharge data from throughout the High Asia study area.

The modeling results was verified using geochemical and water isotope "tracer" techniques developed at CU that allow researchers to follow water as it courses through mountain landscapes. Critical to the project is the university's expertise in remote sensing research through NSIDC -- including assessing changes in Earth's snow and ice cover -- and INSTAAR's research on the physical, chemical and biological processes in "critical zones," which are the areas between treetops and groundwater. INSTAAR administers both the Long-Term Ecological Research site at Niwot Ridge west of Boulder and the Critical Zone Observatory project in the Boulder Creek watershed for the National Science Foundation. The research brought together scientists and government officials in the countries of High Asia to coordinate and compare results on what part of river flows come from glaciers and seasonal snow.  Their main findings are summarized below:

1. 96 percent of the water that flows down the mountains of Nepal into nine local river basins comes from snow and rain, and only 4 percent from summer glacier melt.

2. Of that 4 percent, only a minuscule proportion comes from the melting away of the end points of the glaciers due to global warming.

3. Global warming will melt far less of the glaciers of Central Asia than of those in other mountain ranges. The mountains in and around the Himalayas are so high, unlike in the Andes, the Alps or the Rockies, that even in summer, temperatures remain below freezing point and most of the glaciers don’t melt away at all as it doesn’t make much difference if it gets a little warmer up there because it’s still far below zero.

5. Glaciers in other, lower parts of the world melt in summer over their entire course, so if temperature increases, they melt faster. If temperatures keep rising and that loss is not compensated by increased snowfall in winter – and in some of those glaciers it is – the entire glacier will eventually disappear, Armstrong, the leader of the study  explains. With it, the summer melt water prized by irrigation farmers, households and users of electricity produced by dams could also disappear.

6. But High Asia is different because it’s so much higher. About half of the surface of the glaciers  is above 5,500 metres - the point at which glaciers never melt. These glaciers include the longest in the world outside of the polar regions, the Fedchenko, which is 77 km long.

Posted by Rajan Alexander at 11:28 AM