Shocked Scientists Ask: Is The Sun Is Dying?


Courtesy: Before it is News 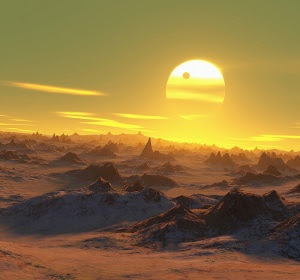 Something is wrong with the sun

They determined during the past century that the sun's nearly 5 billion years old. Everyone was happy because according to observations of other stars similar to the sun that meant the Earth's star would last at least another several billion years.

Everything was copasetic and the universe was in harmony.

First, evidence emerged that the sun's core is shrinking—an indication that it may be using up it's hydrogen fuel at a faster rate than previously believed.

Unfortunately, when the thermonuclear reactions at the core begin running out of hydrogen fuel, a star falls back on the next available element it has to burn: helium. Once that process starts, a star the size of our sun begins expanding and becomes a Red Giant.

No, it won't explode as a nova or supernova, it doesn't have the mass. It will just swell up and up and vaporize Mercury, Venus, Earth and Mars.

Second, astrophysicists discovered an unknown type of solar particle was mutating matter on Earth. What is this strange new particle? What are its properties? Why is the sun suddenly spitting them out?

No one has a clue.


Worst of all, recent observations of other stars with the Hubble Space Telescope, and several European Space agency telescopes, have confirmed that some stars like our sun suddenly begin exhibiting inexplicable behavior—and then, with little warning, they rapidly swell into Red Giants swallowing any nearby planets.

And now our sun is acting oddly in ways never before seen.

[See Solar Scientists Agree That the Sun's Recent Behavior Is Odd, but the Explanation Remains Elusive]

The terrible secret: the sun's been cooling since 1979

While the world was hoodwinked with global warming nonsense, the sun began cooling. It's continued to cool for the past 32 years. Now it's poised to cool much faster as it approaches the Maunder Minimum.

Astronomers confidently predicted the sun would begin growing hotter again by 2007. When it continued to cool they rushed back to their calculators to check the batteries.

Now the sun has entered its peak solar cycle, causing fears of solar storms destroying fragile technology, while the actual output can be charted and is still on a downward plunge.

How low can the solar output go? No one knows. The last time it fell precipitously the interglacial period ended and an Ice Age gripped the Northern Hemisphere for 100,000 years.

But it could be worse than that. If the sun is truly dying ice will eventually creep over most of the planet. Seven billion people will want to live at or near the Equatorial regions.

Discovery of 'mutating matter'
For months mounting fear has driven researchers to wring their hands over the approaching solar storms. Some have predicted devastating solar tsunamis that could wipe away our advanced technology, others voiced dire warnings that violent explosions on the surface of the sun could reach out to Earth, breach our magnetic field, and expose billions to high intensity UV-rays and other deadly forms of cancer-causing radiation.

Posted by Rajan Alexander at 11:18 AM