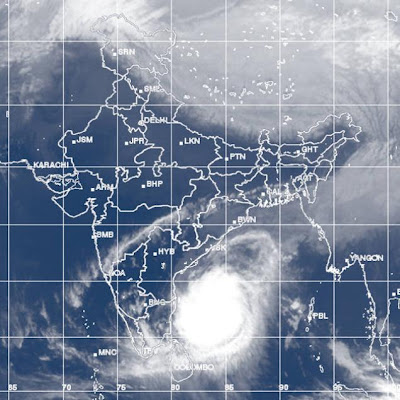 Tropical cyclone ‘Thane' in the south-west Bay of Bengal has intensified into a severe cyclonic storm on Wednesday afternoon.

It is at least 36 hours away from a landfall to the south of Chennai, likely over Pondicherry and neighbourhood, as suggested by a couple of international models.

An India Meteorological Department (IMD) outlook said on Wednesday evening said that the landfall is likely to happen on Friday morning.

‘Thane' remained practically stationary on Wednesday, before intensifying into a severe cyclonic storm about 500 km east-southeast of Chennai, 600 km northeast of Trincomalee (Sri Lanka) and 800 km west-northwest of Port Blair.

The IMD expected the system to move west-northwestwards, intensify another round on Thursday before crossing the north Tamil Nadu and south Andhra Pradesh coast close to south of Chennai on Friday morning.

A severe cyclonic storm is the equivalent of Category-1 on the Saffir-Simpson scale of storm intensity.

‘Thane' may not retain the strength on the go, but latest indications are that it may not weaken on the home stretch as noticeably as was thought would be the case in earlier forecasts.

What seems to be holding it in good stead is the good ventilation, allowing it to ‘breathe' in and out.

Earlier forecasts had de-rated the intensification prospects thanks to unhelpful sea-surface temperatures coupled with the ‘shearing effect' of wayward winds on top of the storm tower.

But, to a large extent, these are being offset by the ventilation effect, the US Joint Typhoon Warning Centre said.

A weather warning for the next two days said that heavy to very heavy rainfall is likely at a few places with extremely heavy falls (25 cm or more) at one or two places over north Tamil Nadu, Puducherry, Rayalaseema and south coastal Andhra Pradesh.

An outlook until Saturday said that rain or thundershowers would occur at a few places over Tamil Nadu, coastal Andhra Pradesh on Thursday before scaling up in intensity.

Posted by Rajan Alexander at 11:18 PM