A month ago, 49 NASA staff wrote to NASA Administrator Charles Bolden asking the organization to look at empirical evidence rather than climate models. Read here. Yesterday, 4 such rebels, attended the Heartland Climate Conference and then shot off a second letter to Bolden responding to NASA’s reply: 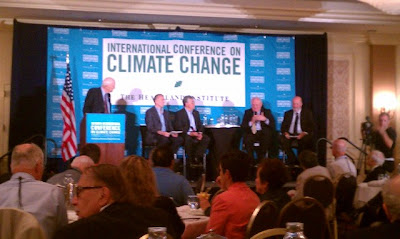 In our letter of March 28, 2012, we, the undersigned, respectfully requested that NASA and the Goddard Institute for Space Studies (GISS) refrain from including unproven remarks in public releases and websites. On April 11th, Dr. Waleed  Abdalati responded, holding that:

“As an agency, NASA does not draw conclusions and issue ‘claims’ about research findings.”  Eight days later, at a senate hearing, Dr. Abdalati, did just that, concluding that Sea-Level rise within the next 87 years projects within a range of 0.2 meters to 2 meters, with lower ranges less likely while

“the highest values are based on warmest of the temperature scenarios commonly considered for the remainder of the 21st century.” Abdalati added: “The consequences of a 1 meter rise in sea level by the end of this century would be very significant in terms of human well-being and economics, and potentially global socio-political stability.”

The range and imprecision of this conclusion is astounding!

“Commonly considered?”  Is this science by poll?  If hard data points to a provable rise, it should be stated with its probability.  Can you imagine one of your predecessors, Dr. Thomas Paine, declaring, “Our Apollo 11 Lunar Lander’s target is the Sea of Tranquility, but we may make final descent within a range that includes Crater Clavius”?

We are not trying to stifle discourse, but undisciplined commentary, lacking in precision, is wholly inappropriate when NASA’s name and reputation is attached.

This letter should end the discussion, as a protracted discourse on this topic is not in NASA’s interest, but a commitment from you to equal or exceed the agency’s reputation for careful reliance upon rigorous science and accurate data most certainly is!

Join us, please, in encouraging your colleagues to achieve the level of excellence the world has come to expect from America’s National Aeronautics and Space Administration!

Waiting to do so is not an option!

PS Waiting to send was not an option either –we have fewer signatures than the first, as not everyone was reachable and only one opted out.

Posted by Rajan Alexander at 10:17 AM